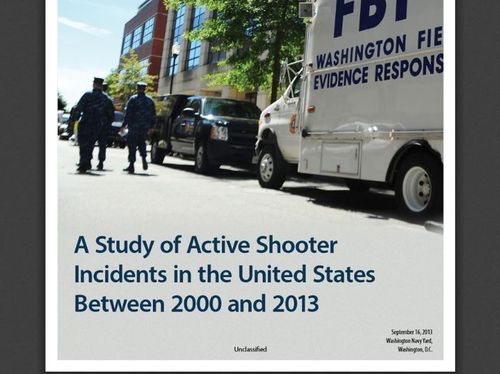 The shooting in San Bernardino, Calif., on Wednesday was unlike nearly every other mass shooting that has occurred in the United States in the past decade and a half as it involved more than one gunman and the perpetrators managed to flee the scene.

Just 2 out of 160 active shooter incidents from 2000 to 2013 had more than one gunman, according to a 2014 report released by the F.B.I. Only 25 of the gunmen got away without being arrested, killed or committing suicide

I have looked at this report [PDF] and it is totally useless, suppressing all reference to race or immigration status. But I can tell you that in the two other incidents mentioned where there were more than one shooter, the gunmen were non-white. One was the Jake England/Alvin Lee Watts shooting in which two Cherokees targeted blacks in Tulsa, Oklahoma, because the father of one of them (Jake England) had been killed by a black gunman who claimed self-defense. [2 CN citizens plead guilty in Tulsa shootings, Cherokee Phoenix, ]

The other was a barbecue in South Jamaica, Queens, New York, in which Tyrone "Big Rumbles" Miller and an unidentified friend—Tyrone presumably refused to name him—having been thrown out of a house party, came back with guns and shot 11 people. By the way, I haven't seen a picture of Tyrone, but Tyrone's victims included Deshawn and Lenaesha, and if a white guy had shot up 11 blacks in Queens, you would have heard of it.  [Victims of gun violence speak out, By Christina Santucci, Queens Ledger, March 3, 2012]