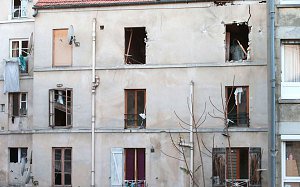 Root Cause Of Jihadism In France: Magic Dirt!

Browsing the Daily Telegraph website this morning I spotted another case of Magic Dirt Theory:

Like so many of France’s mega-estates, this one was mind-numbingly ugly, a forest of Sixties social housing blocks on the outskirts of a large post-industrial town. My friends and I all knew to avoid the local cité, as the French call these tragic enclaves.

I was a schoolboy at the time in Mulhouse in north-eastern France, where I was born: merely using the lone bus route that went through the estate was deemed too risky. We would have made easy prey for the gangs, and we all remembered the day that the bus was shot at.

The cités were in France, but it was almost as if they weren’t really controlled by the French state. Some residents, who were predominantly first or second generation immigrants, usually from north or sub-Saharan Africa . . .

It took the writer 240 words to get to the ethnic point.

. . . managed to get on and move out, against all the odds and despite widespread, barely concealed discrimination; many couldn’t or wouldn’t, stuck in permanent joblessness or dragged into drug-dealing.

Just a short drive away from those hopeless, graffiti-ridden estates in Mulhouse lie Alsace’s picturesque villages and the Rhine valley’s beautiful vineyards, visited by thousands of middle-class British tourists every year who, needless to say, are oblivious to France’s other side.

I live in a lawless slum; you live in a picturesque village; it's not fair!

Tragically, virtually no progress has been made tackling the crisis in France’s housing estates since I finished school and moved to Britain 20 years ago. Much has changed in France overall, but all of my observations remain true, apart from the fact that there is now another route into the estate and a handful of buildings have been demolished . . . .

But demolition of the evil buildings isn't enough; you have to get rid of the magic dirt!

Manuel Valls, France’s surprisingly good prime minister, is one of those who sees this. Mugged by reality, he is calling for a law and order crackdown. But his party clings to its previous views on economic, education and social policy, which makes progress impossible. Some 7 per cent of the population is crammed into 751 “zones urbaines sensibles”, the official name for the sink suburbs . . . .

Passive voice alert: "is crammed" by whom or what?  Where is the agency here?  Who are the crammers?

The red tape and taxes that prevent entrepreneurs from creating businesses and new jobs affect immigrants disproportionately. One shocking study revealed that in 2011, 23 per cent of Algerian immigrants and 25 per cent of Turkish ones were out of work, against 8.5 per cent for non-migrants, a far greater gap than any equivalent here in Britain. The situation is even worse for members of such groups trapped in sink suburbs.

Most depressingly of all, France’s defining post-revolutionary philosophy may be incompatible with the modern world. It is monolithic: there can only be one national identity, one national educational system, one version of Frenchness.

Yet that doesn’t work: in a liberal society made up of multiple communities, something needs to give. Britain’s approach, while also flawed in some ways, is working better: the visit of Prime Minister Modi last week highlighted our flourishing community of British-Indians, for example.

So some immigrant groups do better than others.  How did they avoid the magic dirt?

France too needs to learn to love the idea of multiple, hyphenated identities, which remains anathema to its ruling class. Its immigrants must become French, learn the language and embrace its laws, but must be allowed to retain a separate, subsidiary identity.

Except for the bit about embracing the laws, isn't the rest exactly what the banlieusards have done?

It’s integration not assimilation. At the moment in the banlieues, though, France is getting neither.  [France's grim estates are the perfect breeding grounds for terrorism by Allister Heath; Daily Telegraph, November 18th 2015.]

Ah yes, integration.  Which proceeds so well in societies where identity politics for minorities is encouraged and even rewarded.