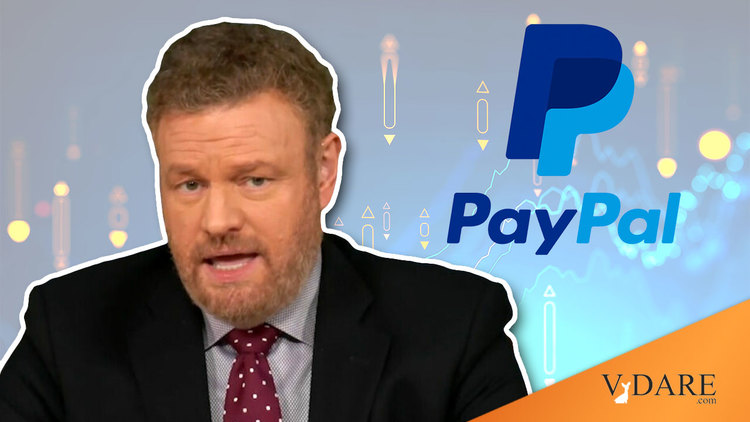 Mark Steyn Points Out The SPLC, PayPal Attack On VDARE.Com Is A Harbinger Of Social Credit Score Dystopia For ALL Dissidents

See, earlier: Thanks To Mark Steyn For Supporting VDARE.com Against The Tech Totalitarians' "Big Shut-Up"

From: A VDARE.com Reader [Email him]

A reader reports that Sunday’s recording of Mark Steyn’s Clubland Q & A.    [MP3/Transcript mentions VDARE.com's troubles with PayPal, MasterCard, and other payment processors.

Starting at 23:58 in the recording, he read a question from a listener who asked how far the government would go in utilizing antiterrorism

legislation (originally aimed at jihadists) against its domestic political opposition (i.e., Trump supporters).  Steyn said that the government’s response to January 6, along with the recent Mar-a-Lago raid, showed that there were no limits to what the deeply corrupt regime governing us would do.

Then, starting at 33:48, he speculates about what could happen if we became a cashless society, with digital currency linked to our social credit scores.  He said that we’ve already seen a dry run of that scenario with Peter Brimelow’s website VDare.com, recounting how you lost access to PayPal, etc., after the SPLC labeled VDare.com a ”hate site.”  He points out that many people regard the SPLC as the government designator of official haters.  (Steyn says he regards the SPLC as a hate site and an evil institution.)

He concludes his extended response to the original question at 37:14. In addition to the points mentioned above, he remarks on the absurdity of the TSA still requiring people to take their shoes off at our airports, even while we have an open southern border.  He also expresses skepticism that anything will be done about immigration, even if there is a red wave in November.

Here's what Steyn said on Sunday, with links added by me:

What they’re talking about is ways that will make it even easier for them, so that for example, if there’s no cash, if it’s digital currency, so if your digital currency is tied to your social credit scores. We’ve already had dry runs for that. I’ve talked before about Peter Brimelow’s website VDARE.com. Now, the Southern Poverty Law Center says that VDARE.com is a hate site. Well, to me, the SPLC is a hate site. They’re a bunch of sex fiends who keep all their money in little British colonial tax havens in the Caribbean. So the SPLC goes around calling everybody else haters. They get very rich, damning everybody else as haters. Then they use that money to salt it away in the Cayman Islands, while they withdraw enough to sexually oppress the chicks who have the misfortune to go to work for them. It’s an evil institution, the SPLC. But for some reason everybody takes them as official. They look on that as the government designator of official haters.

So Peter Brimelow found in the last couple of years that his website, ”Oh, you can’t raise money on PayPal.” ”Oh, no,” Mastercard now says, ”You can’t.” Basically VDARE.com has been a trial run for how it’s going to go in the cashless world. There’s going to be a few people who have actually.... your so-called digital. As they say, you will look very rich on paper or on screen. That’s fantastic. I had no idea. Apparently, I’ve got seven million dollars, and then you try to use it, say to launch an anti-immigration website, and suddenly you don’t have access to that seven million dollars. You can ask Peter Brimelow about how that goes over at VDARE.com because he’s living it right now. He was the pilot program for this.

Steyn has been kind enough to mention this before, see Thanks To Mark Steyn For His Kind Words On Network Solutions' Attempted Deplatforming Of VDARE.com. I'll also say that we can still process credit card donations, if you want to donate: click here.