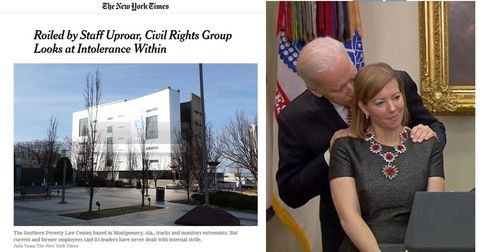 NYT: Morris Dees Was Fired by SPLC for What Joe Biden Does During His Average Prayer Breakfast

MONTGOMERY, Ala. — Known as one of the most celebrated civil rights lawyers of his time, Morris Dees spent nearly a half-century building the Southern Poverty Law Center into one of the nation’s wealthiest and best-known legal advocacy groups.

He faced down the Ku Klux Klan in the 1980s, and developed his organization, founded in 1971 near the church in Montgomery where the Rev. Dr. Martin Luther King Jr. preached

So when you donate $5,000 to the SPLC, it’s really going to Rev. Dr. Martin Luther King Jr., the first president of the SPLC.

(Oh … to be pedantic, MLK was the first president of the SCLC, which is, technically, not precisely the same organization as the SPLC.)

, into a crusading anti-hate empire dedicated to fighting extremism in the United States. …

Several women who have worked at the center said they were cautioned against being alone in a room with him. Others who worked there said they had witnessed inappropriate touching or heard him make lewd remarks.

Jason Brooks, a paralegal in Montgomery in 2016, said he had personally heard Mr. Dees say “I like chocolate” in the presence of black women, which he took as a sexual innuendo. (Mr. Dees said he never made the comment.)

There were also instances, Mr. Brooks said, when he witnessed Mr. Dees approach seated women from behind and put his hands on their shoulders.

Although Mr. Dees denied that he was a sexual harasser, he acknowledged that he was the subject of a 2017 complaint after an encounter in Atlanta made an employee uncomfortable.

According to Mr. Dees, he approached the woman and “touched my hand across the top of her shoulder” and introduced himself. He asked about the woman’s visible tattoos, he recalled, and said he had one himself, pointing to his leg.

I realize the New York Times dispatched ten journalists to report on their institutional ally, the SPLC, but perhaps there is a little more to the story than Morris putting his hands on women’s shoulders? I dunno what the rest of the story is, but I bet there is more.

It could be Morris did worse things.

Or it could be that Morris has always been Morris, but what’s different now is the Half Billion Dollars.

And getting completely off track: