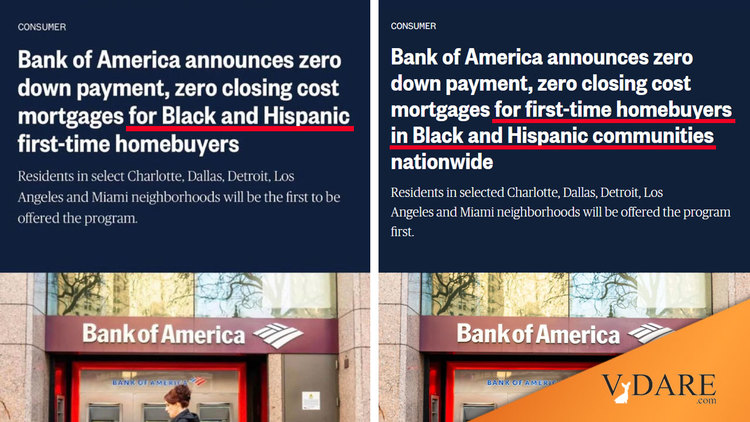 Is Bank Of America Doing Anti-White Racial Discrimination By Person Or By Neighborhood? (Both Are Illegal)

Below, Steve Sailer links to, and quotes a news story that says

That same story has had its headline changed to

BANK OF AMERICA MIGHT BE GETTING ITSELF INTO A LAWSUIT:  “Bank of America Announces Zero Down Payment, Zero Closing Cost Mortgages for Black and Hispanic First-Time Buyers.”  This may be another job for the American Civil Rights Project. (Update:  They apparently changed the headline.  The original headline was as shown.)

I don’t know why NBC changed the headline, but it could have been in response to a panicked phone call from Bank of America’s legal team saying something like ”We’re not illegally discriminating against whites, we found a workaround.”

The BOA news release, linked in the NBC story, talks about providing loans in black and Latino communities, which could theoretically be  available to white gentrifiers:

They also explain that they’re doing it because of a Gap in homeownership, so they probably are illegally discriminating by race:

According to the National Association of Realtors, today there is a nearly 30-percentage-point gap in homeownership between White and Black Americans; for Hispanic buyers, the gap is nearly 20 percent. And the competitive housing market has made it even more difficult for potential homebuyers, especially people of color, to buy homes.

The only question is, if this is brought before a court, will the court follow the law, or will they decide that a white person has no ”civil rights” that the Federal Government is bound to respect?