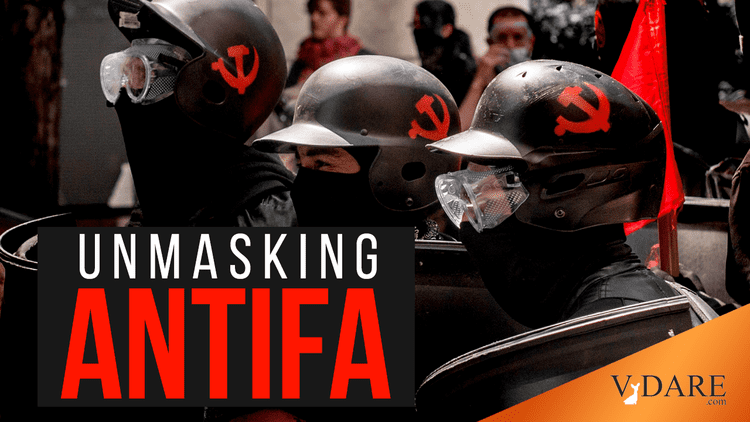 How Is Antifa Organized?

iSteve commenter Muggles speculates on the nature of Antifa:

>>It seems to be a type of leaderless resistance and the MSM has no interest in probing that.<<

This is what we are being fed, but as most here suspect this may be a scam or con. You would expect that by now, were these groups labeled “alt right” or neo nazi, entire issues of establishment publications and websites would have elaborate tables of organization and leadership.

Also I believe both federal and local LEOs have informants and agents working with these groups from the inside. For what reason remains the real mystery.

a. “Anarchist” left ideology claims to be leaderless by design. On the street level this isn’t true, but few “leaders” willing to accept that label.

b. The reason for a. is mainly the federal RICO statutes. If you claim no “organization” then you can’t be legally responsible for the acts of “members.” Smart if you can get away with that.

Southern California law enforcement agencies over the last dozen years have gotten adept at teaming up across municipal and jurisdictional boundaries to use RICO to roll up entire black and Latino street gangs in a single day. Don’t just try to arrest the gang kingpin, arrest all 50 or 100 members of the gang in one day and ship them off to distant federal prisons. The Racketeer-Influenced Criminal Organization law was passed in 1970 to crack down on the Italian mafia, but it has been used against a wide variety of organizations. Using it on Antifa seems feasible.

d. LEOs may prefer monitoring to repressing so long as violence is contained. Plus less political blow-back. This might change if violence becomes targeted, murderous.

e. MSM in push to defeat Trump wants the Narrative to be “protesters” not savage mobs. “Dissent” versus “police repression.”

f. Affluent white punks run antifa and related gangs. Using lumpen proletariat criminals as allies. This might be actual “white privilege” at work. “antifa” is about inflicting damage on society, not stealing for gain (that’s for the allies). MSM regards antifa as the Biden militia, at least until Nov.

Does Biden have a plan to put Antifa back on ice as soon as he wins? Perhaps some reporter should ask him…

Anyway, as the old commies used to say, all of this hands-off MSM treatment “is no accident.”