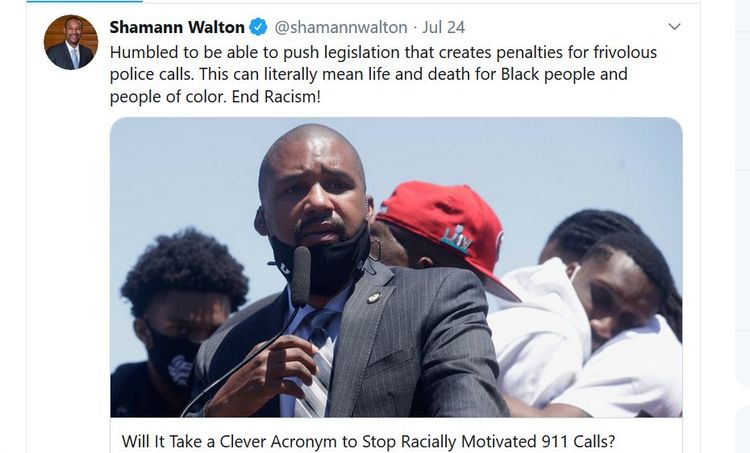 NYT: Racial Slurs Are Clever as Long as They Demean White Women

Earlier: "And Five Minutes Later She Is Dead"—The Dead Beckys Who Should Have Called 911

Will It Take a Clever Acronym to Stop Racially Motivated 911 Calls?

A San Francisco politician thinks a new bill — named the “CAREN Act” — could be what it takes to get people’s attention, and limit potential harm.

The stories showed up in Shamann Walton’s social media feeds with alarming regularity: An eight-year-old selling water to raise money to go to Disneyland. A family barbecuing food on a charcoal grill near Lake Merritt. A man bird watching in Central Park. A woman sitting, leisurely, on a public bench in Manhattan. All of these activities — and several more like them — had been reported to law enforcement, often by strangers passing by.

In elementary school, these 911-dialers might have been labeled a tattletale. Today, a more widely used term is “Karen”: It’s internet shorthand for a white woman who embodies entitled “Can-I-speak-to-the-manager?” energy, cloaking prejudice in feigned innocence and concern.

Mr. Walton, who is a Democrat on the San Francisco board of supervisors, is well aware that this behavior can lead to real consequences for Black Americans: They are disproportionately likely to be killed by the police, according to analysis by the news media and academic research.

Enter Karen. Or CAREN. Mr. Walton [Tweet him] recently proposed a new ordinance, named the “CAREN Act,” to discourage and penalize people for making racially motivated 911 calls without reasonable suspicion of a crime.

Most municipal bills are a little less catchy, burdened by phrases like “planning code.” But Mr. Walton’s proposal speaks to the meme-ified trope those who are online can readily identify.

He wouldn’t comment specifically on the ordinance’s wink of a name — which stands for Caution Against Racially Exploitative Non-Emergencies — or talk about how many drafts he went through before landing on this acronym. He did note the dangers represented by the “Karen” meme, and this ordinance certainly gathered more national attention than other board of supervisors business, whether that was the intention or not.