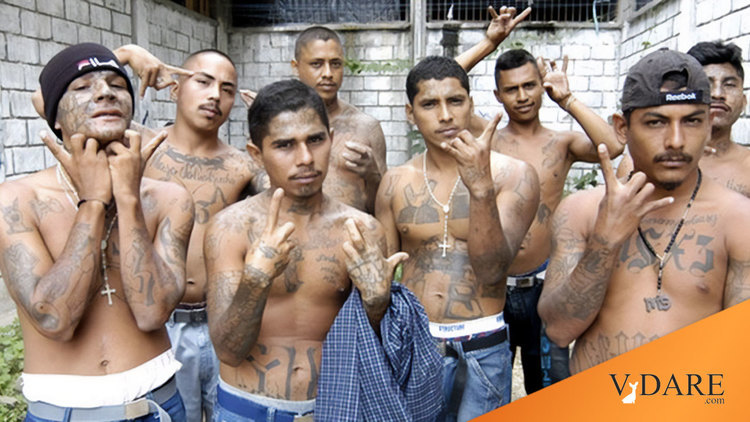 A big change in crime-fighting tactics in California over the last decade has been to stop focusing on arresting just the “kingpins” of street gangs (because, it turns out, it doesn’t actually take some kind of rare Ernst Stavro Blofeld-style malevolent brilliance to run a gang). Instead, all the cop agencies get together and sweep up at once all the low-level “gang-affiliated” usual suspects (e.g., guys with gang tattoos on their heads) and send them to prison on RICO (Racketeer Influenced Corrupt Organization) charges and/or enhance their sentences for other crimes.

The 2006 case against HLP was the first in Los Angeles to use RICO statutes on foot soldiers as well as gang leadership. Street gangs had previously been seen as small fry, but, by the mid-2000s, “the culture changed in terms of using this great tool,” says Jim Trusty, chief of the U.S. Justice Department’s Organized Crime and Gang section in Washington, D.C.

… Prosecuting street gangs has meant abandoning the previous focus on kingpins. “‘Cut off the head and body dies’ just isn’t true” when it comes to Southern California street gangs, says Brunwin. “You have to go after everyone—anyone who had anything to do with, supported, or touched the organization. You have to have an effect on the structure, its daily operation. The only thing that works is adopting a scorched-Earth policy.”

Since 2006, there have been more than two dozen RICO indictments in Southern California, targeting Florencia 13, Hawaiian Gardens (HG-13), Azusa 13, Five-Deuce Broadway Gangster Crips, Pueblo Bishop Bloods, and many more of the region’s most entrenched and violent gangs.

Most of the indictments have dozens of defendants; the Florencia case had 102, while Hawaiian Gardens, in 2009, was one of the largest street-gang indictments in U.S. history, with 147.

Some of these indictments once provided news fodder for days. Now they’re so common that they no longer earn the Los Angeles Times’ front page. A recent RICO indictment against 41 members of the El Monte Flores gang, detailing alleged extortion, drug taxation, and race-hate crimes dating back more than a decade, didn’t even warrant a press conference. …

Most of the Southern California RICO prosecutions have instead swept up large numbers of street gang members. Leaders of prison gangs like the Mexican Mafia usually aren’t even charged in these prosecutions, and are referred to as “unindicted co-conspirators.” “In prosecuting the members, you make [prison-gang leaders] powerless,” Brunwin says. “If no one’s out there on the street doing their work, then they’re just guys in cells.”

Southern California RICO cases have sent large numbers of street-gang soldiers to prisons in places like Arkansas or Indiana, where no girlfriend is coming to visit. In California prisons, inmates usually serve only half their time before getting out on parole, but federal prison sentences are long and provide for no parole.

To my eye, the effects of most RICO prosecutions against Southern California gangs have been dramatic, as if a series of anthills had been not just disturbed but dug up whole. Hawaiian Gardens has seen a 50 percent in drop in violent crime since the prosecutions of 2009. The neighborhoods that spawned Azusa 13 and Florencia 13 seem completely changed. I’ve seen similar post-RICO transformations across Southern California.

Part of this is just high real estate prices driving the families of guys who will grow up to be usual suspects out of Southern California and into the less expensive places like the Central Valley of California.

But still, Quinones may well have a point that these kind of military-style massive raids may be helping.

Of course, rounding up the usual suspects doesn’t sound particularly in line with Anglo-Saxon individualistic principles of jurisprudence.

The good folks in the Central Valley are now trying to reproduce what SoCal law enforcement managed to do with lots of federal help. 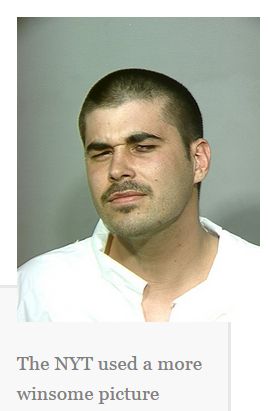 Not surprisingly, the New York Times, with its tireless suspicions that flyover folks might be trying to discourage blacks and Hispanics from leaving the big, expensive cities, is alarmed.

In a strange twist, they are defending a white (or whitish) guy named Jesse Sebourn accused in Modesto of belonging to the East Side gang. (He has “ES” visibly tattooed on the back of his head). But, you see, he’s a white guy accused of being in a Hispanic gang:

How Do You Define a Gang Member?

Laws across the country are being used to target young men who fit the description for gang affiliation. But what if they aren’t what they seem?

The trial of Sebourn and eight other defendants was a classic POS case of the kind that left Asst. DA Kramer in Bonfire of the Vanities pensive over his career choice. Sebourn and his sister got caught by a North Side gang tagging over the Northsiders’ graffiti and got beat up. A few hours later a member of the Nortenos was murdered, presumably in retaliation.

The cops rounded up the usual suspects in the Surenos, although at least one had vamoosed back to Mexico. They flipped one woman to testify against the other arrestees. So the defense claimed the prosecution’s witness and the fugitive were the real killers and everybody else was just tangentially involved.

The only thing I can conclude is that I’m glad I don’t live in Modesto.

The point of the NYT article is to get us worked up over the prosecution’s use of “gang-enhancement” to boost the maximum sentence possible from 15 years to 50 years. As usual, nobody is very interested in general principles, just whether or some white guys are being racist.

… In Stanislaus [Modesto] County, as in many counties in California and across the United States, law-enforcement officers keep a database of individuals that they have identified as gang members. From their point of view, these lists are vital and necessary, but activists argue that they can be discriminatory. Researchers have found that white gang membership tends to be underestimated and undercounted, while the opposite is true for black and Latino youth. In 1997, California created a statewide database, called CalGang, and by 2012, according to documents obtained by the Youth Justice Coalition, there were more than 200,000 individuals named in it (roughly the same number as the population of Modesto), including some as young as 10. Statewide, 66 percent were Latino, and one in 10 of all African-Americans in Los Angeles County between the ages of 20 and 24 were on the list. … Black and Latino inmates account for more than 90 percent of inmates with gang enhancements; fewer than 3 percent are white.

The article doesn’t document what evidence, if any, there is that white gang members are underestimated and undercounted.

Indeed, the article’s focus on a white guy accused of being part of a Hispanic gang (a not uncommon phenomenon — there are so few white street gangs left that white guys who like the criminal life often join Latin gangs) undercuts the implication that California is full of white street gangs, a concept that’s easier to derive from SPLC fundraising direct mail than from living here.

One interesting lesson that isn’t brought out in the article is that in the age of everybody having a Social Media Permanent Record, it’s harder to be a criminal:

At the Sebourn trial, Brennan showed the jury and his witness, Robert Gumm, a Modesto Police Department detective, image after image of Sebourn’s extended network of friends, photos of young men and women throwing up signs for the number 13, contorting their fingers into crooked forms of the letters CLS, for Celeste Locos Sureños, Sebourn’s clique from the neighborhood near Celeste Street, on the east side of Modesto. Most of the pictures had been taken from the defendants’ cellphones, as well as from their Facebook pages. The jury saw photos of tattoos, of young men drinking 40-ounce bottles of malt liquor, scowling at the camera. It was a gangbanger’s photo album, or at least that was what this curated selection of images appeared to be. And though Sebourn himself was in only a couple, Brennan argued that he was known to these young people, as they were known to him. It was guilt by association. And it was very convincing. That rainy morning in Modesto, I had two contradictory thoughts at once: This doesn’t seem fair; and These knuckleheads sure look like gang members.

If you were a serious mastermind criminal, yeah, you could probably keep pictures of you kicking it with your homies off Facebook. But most street gang members are dopes and are in it for the feelings of social dominance as much as for the money. So if you can’t boast about your exploits online, what’s the point?

According to the defense, the defendant is a dope: 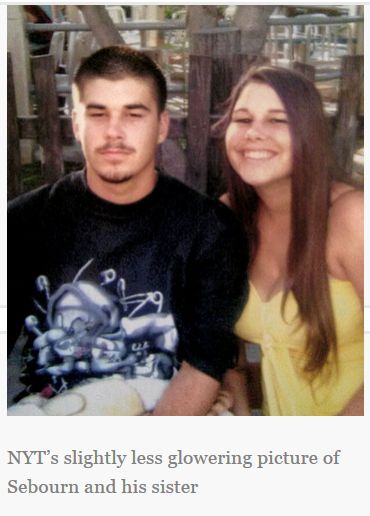 Sebourn’s father, Michael, was a former Aryan Brotherhood member who spent much of his son’s childhood in prison. He had just been released a few weeks before the murder, and he was also a defendant in the case. Sebourn was raised by his mother, Sandra, who worked at a hospital, and her boyfriend, a man named Kyle Garcia, who died of cancer just before the trial began.

Beginning when Sebourn was in second grade, his teachers wanted to put him in special-education classes, Sandra told me, but she rejected the idea. “I didn’t want him to deal with that stigma,” she said. An expert hired by the defense estimated that Sebourn’s I.Q. was only 70 and described him as having severe intellectual limitations, unable to remember his own address or phone number. Brian Ford, a clerk for Sebourn’s lawyer, told me that Sebourn was something of a neighborhood mascot, a teenager who had never really grown up: a funny, goofy boy, always smiling. He liked to drink, smoke weed and hang out with his friends, most of whom were Latino.

Having a 70 IQ doesn’t seem to have hurt him with the ladies:

He dropped out of school at 16 and became a father a couple of years later. … As for being a gang member, [his mother] had a hard time believing it: “As far as I know, he had six girlfriends, and then he had his son, and then he had to work, so when did he have time to do this gang stuff?”

The hero of the article, a defense expert witness, gets the author to write:

Like young people anywhere, they could be trying on identities. They might be irresponsible, perhaps unlikable, maybe some were even dangerous, but legally, none of that was relevant.

But getting “ES” tattooed on the back of your head seems like a tad more than Bowiesque trying on of identities. The idea behind head tattoos is to Make a Commitment.

Anyway, the article seems to have been a flop at getting the usual SJW mob worked up online. (The long article only has 105 comments after about a week.) Nobody cares about white guys like Sebourn, even if they have been Hispanically acculturated. Heck, SJWs don’t really care about Hispanics.