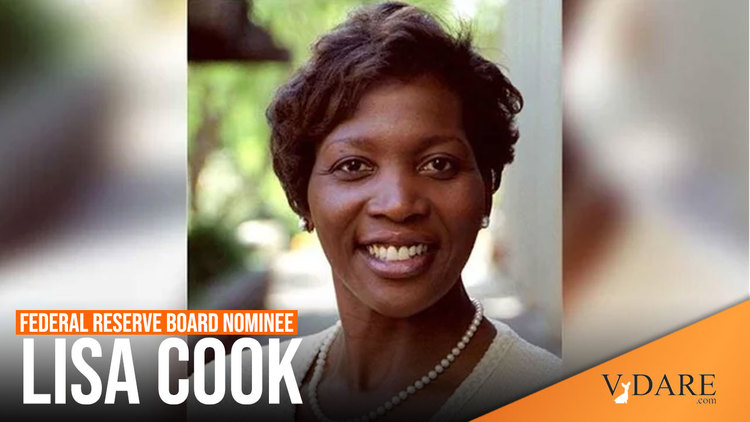 Did Biden's Fed Nominee Lisa Cook Mess Up Her Most Famous Paper?

As part of the Biden Administration’s push to nominate black women because of their intersectional supremacy,

As of Feb. 1, Black women have accounted for around a quarter (24%) of President Joe Biden’s appointed judges – far higher than the percentages for any other president, including Barack Obama (8%) and Bill Clinton (4%). https://t.co/OSIZuYyVnU pic.twitter.com/KmdRBjAmCX

Joe Biden is nominating Lisa D. Cook of Michigan State to the Federal Reserve board.

I don’t know anything about monetary policy, so I won’t comment on whether she knows much about it.

But I was struck that economics quasi–Nobel winner Paul Romer (who was, according to Cook, “informally my first dissertation adviser”) went insane with rage when somebody on the Economics Job Rumors bulletin board dared question Cook’s best known paper, entitled “Violence and Economic Activity: Evidence from African American Patents, 1870 to 1940.”

If you are going to quote people who claim to do science in the sewer of EJR, I don't want you in my feed.

Economics Job Rumors is where guys who’d like to have sweet jobs like Romer’s tenured post at NYU hang out anonymously and shoot the breeze. Not surprisingly, it’s hated by economists like Romer who already have the really good jobs. (Yeah, I know it’s disrespectful to talk as if human beings respond to economic incentives, but … we’re talking about economists.) 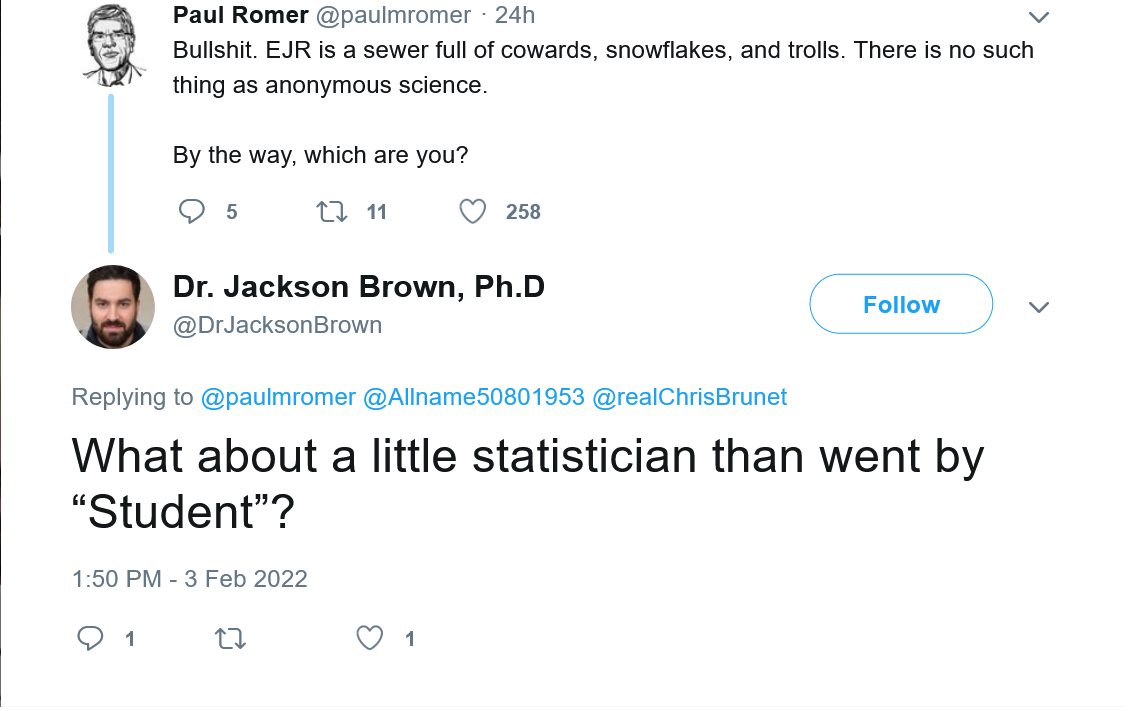 “Student” was the pseudonymous name of William Sealy Gosset, who invented the t-distribution, a huge contribution to human welfare:

Another researcher at Guinness had previously published a paper containing trade secrets of the Guinness brewery. The economic historian Stephen Ziliak discovered in the Guinness Archives that to prevent further disclosure of confidential information, the Guinness Board of Directors allowed its scientists to publish research on condition that they do not mention “1) beer, 2) Guinness, or 3) their own surname”.

Cook’s study is based on a database she constructed of 726 patents issued to blacks from 1870-1940, about 10.3 per year. She claims that blacks suddenly stopped earning patents in 1900 due to Plessy v. Ferguson in 1896 and a rise in riots and lynchings. But it seems at least as likely that Biden’s nominee undercounted how many patents blacks earned after 1899, which appears to be the peak year for black patents in her graph.

As you’ll note, this graph has two axes: the white (or non-black) patents per million on the left, which goes up to 550, and the black patents on the right, which goes up to 1.0. In other words, according to Cook, blacks were earning patents at less than 1/550th the rate of whites.

In contrast to Cook’s database of only 726 patents earned by blacks over 71 years, a new database from the Brookings Institution claims that blacks earned almost 50,000 patents in those years, 2.7% of all patents in the U.S., and that blacks in the North during this period earned almost as many patents per capita as whites. The Brookings numbers sound…enthusiastic, but somebody in the Senate should ask Dr. Cook why she found only about 1/70th as many patents issued to blacks as the Brookings Institution found.

Perhaps I’m more into methodological debates than most people, but Cook vs. Brookings in the Senate on whether blacks only invented 1/550th as many patents as whites sounds like Good TV.

I can't believe Romer, Planet Money, and so many others missed the biggest flaw in Cook (2014):

The "sharp decline in patenting" by blacks at 1900 in the author's data occurs at the exact cutoff point of a contemporary survey of black inventors used as the largest data source! pic.twitter.com/roLUEGOhRA

I looked into it and it’s a pretty interesting Black History Month story.

According to Cook, 65% of her database of 726 patents is drawn from the work of Henry E. Baker, a black official in the U.S. Patent Office who spearheaded the 1900 effort by the McKinley Administration to compile a list of black patent holders for “The Exhibit of American Negroes” at the 1900 World’s Fair in Paris. This was an impressive effort paid for by $15,000 appropriated by Congress, and which employed the services of top men of the black race such as W.E.B. Du Bois and Booker T. Washington’s protégé Thomas Calloway.

The Patent Office did not keep records by race. So, on January 26, 1900, Baker’s boss, the Commissioner of Patents, sent out this letter to hundreds of patent attorneys, manufacturers, and leading men of color: Shortly thereafter, Baker then published a published a pamphlet, The Negro As an Inventor (pp 397-413), featuring a list of over 400 patents earned by blacks.

In other words, the high point of research into the history of black inventors was early in the year 1900, in order to be featured at the 1900 World’s Fair, which is exactly when Dr. Cook’s database of patents issued to blacks suddenly plummets.

So, it appears she messed up badly in drawing conclusions about causality from her quite spotty data. She probably missed a whole bunch of post-1900 patents by black inventors because 1900 was the peak of Henry Baker’s efforts to document black inventors.

When you type “American Inventors” into Google and get back a whole bunch of 19th century black inventors, that’s largely drawing from Baker’s work. (Interestingly, Google’s list isn’t quite as hilariously racially biased as it was a few years ago: while 3 of the top 4 are black, only 5 of the top 10 are black. When I first looked into this a half decade ago, only Thomas Edison and Alexander Graham Bell made the top 12, and Bell’s picture looked pretty black.)

Keep in mind that Baker’s work is a useful history and reasonably legit. For example, here’s one of his colorful anecdotes that I checked out:

This impressive man’s name was Benjamin T. Montgomery. In contrast to Baker’s account, he wasn’t owned by Jefferson Davis, but by Davis's older brother Joseph Emory Davis, a vastly wealthy planter and utopian socialist. From Wikipedia:

Joseph Davis was influenced by the utopian socialist ideas of Robert Owen, whom he met in the 1820s during Owen’s tour in the United States. When Davis established his Hurricane Plantation at Davis Bend, he worked to create a model cooperative slave community. He hoped to show that a higher functioning and profitable community could be achieved within slavery. He allowed a high degree of self-government for his 350 slaves, provided better nutrition and health and dental care, and created a communal environment. He worked closely with Benjamin T. Montgomery, a brilliant and literate African American slave, whom he allowed to establish a store on the property and who managed much of the marketing of plantation produce.

The propeller could cut into the water at different angles, thus allowing the boat to navigate more easily through shallow water. This was not a new invention, but an improvement on similar designs invented by John Stevens in 1804 and John Ericsson in 1838.(U.S. Patent 588) On June 10, 1858, on the basis that Ben, as a slave, was not a citizen of the United States, and thus could not apply for a patent in his name, he was denied this patent application in a ruling by the United States Attorney General’s office. It ruled that neither slaves nor their owners could receive patents on inventions devised by slaves.[citation needed] Later, both Joseph and Jefferson Davis attempted to patent the device in their names but were denied because they were not the “true inventor.” After Jefferson Davis later was selected as President of the Confederacy, he signed into law the legislation that would allow slaves to receive patent protection for their inventions. On June 28, 1864, Montgomery, no longer a slave, filed a patent application for his device, but the patent office again rejected his application.

But in Baker’s defense, Jefferson Davis lived next door to Joseph Davis and there was litigation among their heirs over who should inherit what.

Basically, the majority of Google-celebrated black inventors discovered by Baker were competent technologists rather than hoaxes, which by 2022 standards is impressive.

On the other hand, most patents don’t actually amount to a hill of beans in the long run. For example, in the 1920s, Albert Einstein read a tragic story in the newspaper about a family who’d died because the poisonous coolant from their refrigerator had leaked. Einstein and Leó Szilárd set about inventing the Einstein Refrigerator with no moving parts to be safer and the pair earned about 50 patents. But then somebody else invented non-toxic Freon, which proved much cheaper (but then caused a hole in the ozone layer), so we don’t have Einstein refrigerators in our kitchens. But decades later Einstein refrigerators wound up being used in breeder reactors.

My point in recounting this convoluted chronicle is that the history of technology is really complicated.

But anybody who puts in a potential contribution deserves respect.

For example, in Kenosha in 2020, after talking to Jacob Blake’s hotep dad, Joe Biden announced:

“Why in God’s name don’t we teach history in history classes? A black man invented the light bulb. not a white guy named Edison. Okay? There’s so much. Did anybody know?”

Lewis Howard Latimer didn’t actually invent the light bulb, but he was a good guy.

Whether Lisa Cook is in the same class, I don’t know.

Let me point out that this is a good example of why I like to utilize other people’s lists if possible to avoid the problem obvious in Cook’s combination of empiricist and theorist.

It’s not just that I’m lazy. Working with preexisting rankings helps avoid bias. If my thesis is, say, that the best songs from 1964-1973 were surprisingly non-leftist, I could make up my own list of the best songs to prove my point. But I might be prejudiced. On the other hand, if I work from Rolling Stone magazine’s list, which is obviously strenuously biased in the opposite direction, I’m likely to be fairer.

But if you are a Biden Federal Reserve nominee you don’t have to be as cautious because it’s racist and sexist to raise doubts about your work.