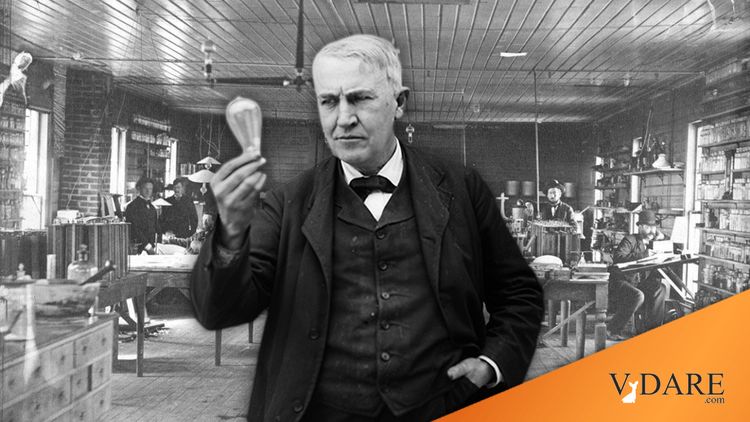 With Joe Biden announcing in Kenosha today that “A Black man invented the light bulb, not a white guy named Edison” (seriously, Joe said that), it’s worth remarking upon Edison’s central role in the history of invention. If I took more time I could find a more authoritative-sounding source than TV Tropes, but this gets the point across:

More important than the things he invented though was the technique he developed for it. After a fashion (James Burke did), you could say that Edison invented inventing. He came up with the modern R&D cycle, which consists of (as Burke put it): Identify a market, get backing before you start, publicize it ahead of time so the public is willing to pay for it, and plough back the profits into making more inventions. He also developed the world's first real R&D team—his numerous and largely unsung assistants, working hard on inventions for which Edison would get all the credit (eventually, he had the sense to start crediting things to his corporation, about which see below); before this, invention was usually one guy or a few, and it wasn't their only job.

One of the points of the once-famous story of Edison inventing the lightbulb was that the Edison laboratory had the scale and scope of workforce to make a massive effort to find the optimal material for the filament. From Amusing Planet:

Edison continued to experiment with different organic materials which he carbonized in his laboratory. He contacted biologists and had them send different plant fibers from the tropics. He sent his workers to different places around the globe looking for the perfect material. Edison estimated that he “tested no fewer than 6,000 vegetable growths, and ransacked the world for the most suitable filament material.” One of Edison’s workers, William H. Moore, sent him samples from a bamboo grove growing near the Iwashimizu Hachiman Shrine in Kyoto in 1880.

As Tesla pointed out, Edison’s weakness as an inventor was that he wasn’t a theoretician, so he often had to use brute force techniques like having his men round up 6,000 different kinds of plant (Edisonian science). But the point is that Edison had a huge team of talented men working on projects, which is not something that was common before him in the history of research and development.