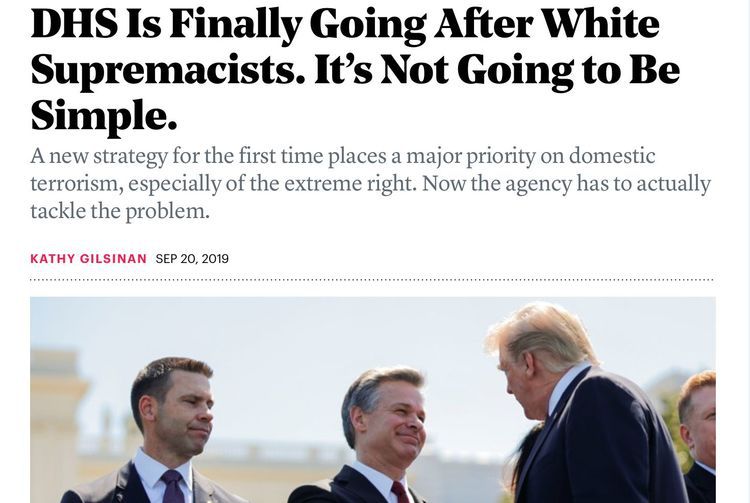 When the Department of Homeland Security (DHS) was created, it was because of the Muslim terrorist attack of 9/11. It should have been created after the first attack on the Twin Towers. While in both cases there were related immigration violations among the two different groups of terrorists, both groups were mainly illegal aliens, whether aliens in the United States without a status, or aliens who had fraudulently obtained some sort of status.

One could see both terrorist incidents as a failure of immigration enforcement, but under various administrations interior enforcement of the immigration laws, whether in the early 90s or the early 2000s, was lax at best, especially in even then de facto Sanctuary Cities like New York City.

Both attacks were perpetrated by groups of Muslim illegals. However, both groups were also the subject of Federal Bureau of Investigation (FBI) ongoing operations at the time of the attacks. Basically, both attacks happened because of FBI failures. The group that perpetrated the first attack was infiltrated by an FBI informant, though that informant was not in deep enough to know the details of the Twin Towers attack. Similarly, the FBI was conducting a below-the-radar operation to find the associates of Zacarias Moussaoui and others of the larger 9/11 attack group. That, was obviously, a complete failure. Even though the FBI failed, they were not broken up as the legacy Immigration and Naturalization Service (INS) was.

Ostensibly, the new DHS and the various immigration enforcement components were supposed to be concentrating on stopping terrorism, but those components, especially U.S. Citizenship and Immigration Services (USCIS), were complete failures in finding and preventing terrorists from entering the United States or identifying them while they were applying for immigration benefits.

But, the FBI retained the anti-terrorism portfolio after 9/11, and their failures. The FBI’s authority is to investigate, disrupt, and arrest terrorists and terrorist plots. Contrast this with DHS’ anti-terrorism responsibilities, which were nothing more than an accidental tasking coming out of the primary duty of DHS, which was to enforce immigration and customs laws. Laws which if properly enforced, could disrupt alien terrorist networks and attacks. However, under George Bush and Barack Hussein Obama, interior enforcement of immigration laws was a sad joke. So sad was interior enforcement that even those Muslim residents identified as deportable aliens under the George Bush Special Registration program were uniformly awarded legal permanent residency rather than deported.

While perhaps FBI failures might encourage its elimination in favor of a new more competent organization, DHS certainly isn’t either competent or legally able to take over the White Supremacist Terrorism portfolio, but DHS head Kevin McAleenan  does desperately want something else to do rather than arrest illegal aliens.

Kevin McAleenan took the El Paso shooting personally. The acting secretary of the Department of Homeland Security had visited the city more than a dozen times. He recalled in an interview yesterday that among his first thoughts were the safety of the DHS workforce, which numbers some 4,000 people there, many of them Hispanic.

The shooter’s motivation quickly became clear, with 22 people dead in a Walmart and an online manifesto attributed to the shooter citing an “invasion” of immigrants. “This,” McAleenan recalls thinking, “was an attack on all of us, on our family.” Speaking to The Atlantic more than six weeks after the attack, he had an “El Paso Strong” bracelet on his wrist.

The El Paso shooting figures into a new strategy to counter terrorism and “targeted violence” that the Department of Homeland Security will release today, which The Atlantic obtained and describes here for the first time. The document dwells at length on the threat of white supremacists specifically, which is surprising coming from President Donald Trump’s administration, given that one of its first counterterrorism policies was to try to ban citizens from seven Muslim-majority countries. Trump has also pushed for a border wall, which he has said will help keep out terrorists, even though most fatal terrorist attacks in the United States in recent years have been carried out by U.S. citizens or permanent residents. The DHS document is an acknowledgment that, nearly 20 years after 9/11, the new terrorist threat comes largely from within—and not as much from jihadists as from the extreme right.

The department is clearly trying to send a message that it takes the threat of violent white nationalists seriously, and McAleenan said that when leadership lays out its goals, bureaucracies tend to move.

[DHS Is Finally Going After White Supremacists. It’s Not Going to Be Simple, by Kathy Gilsinan, The Atlantic, September 20, 2019]

While McAleenan  emphasizes DHS’ support function on terrorism issue, your humble correspondent knows that the plan is to transform ICE SVU, DHS’ current sex police, into the new FBI and grab the terrorism portfolio from the Feds, as the best opportunity to further abandon immigration enforcement. No more bad publicity of arresting Guatemalans at work-sites, now ICE SVU will be breaking down the doors of White podcasters and bloggers. And this will not be the first time that ICE SVU poaches, they do it all the time, whether it is poaching from the DEA at marijuana grows or the FBI over kidnapping jurisdiction over the Lindbergh Act and the Mann Act.

And don’t say we did not warn you that DHS was not content with busting illegal aliens, it wanted to go after whites with a vengeance. They don’t like arresting browns, but whites are a different story for Kevin McAleenan .