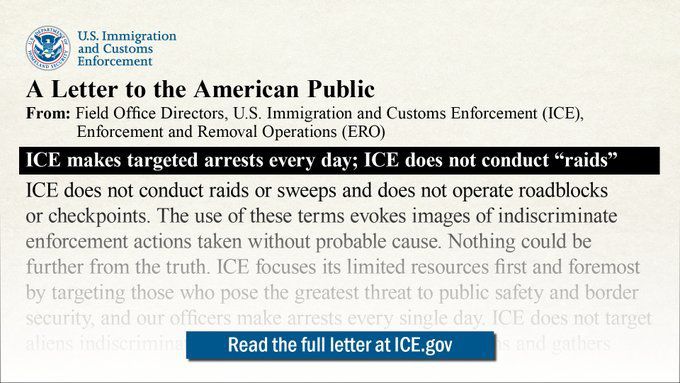 First, ICE SVU, the derogatory term I use for ICE, which stems from ICE’s obsession with sex crimes, has little interest in enforcing immigration law, but is very interested in protecting Corporate America from counterfeit t-shirts and bootleg DVDs. As if to prove my point, the new Special Agent-in-Charge of the San Francisco Field Office of ICE SVU, Tatum King, long practiced at being a lap dog of corporate power rather than taking down corporate employers of illegal aliens, launched a raid on sales of unlicensed Oakland Raiders corporate product in conjunction with, surprisingly, the Oakland Police Department, to coincide with Monday Night Football.

U.S. Immigration and Customs Enforcement have been cracking down on undocumented immigrants, but on Monday the agency’s operations at Oakland Coliseum focused on unauthorized and unlicensed NFL gear, according to a Friday news release.

ICE targeted vendors of unauthorized T-shirts, hats, caps and bandanas, and the raid was done in partnership with NFL brand security representatives and state and local law enforcement.

Officials said they seized about $11,000 worth of illegal swag — undoubtedly, most of it silver and black — during the Monday Night Football game and its pre- and postgame tailgate parties.

Now, these raids to protect corporate profits resulted in no arrests, just the seizure of allegedly counterfeit goods. Why no arrests?

Tatum King, special agent in charge of the San Francisco Homeland Security Investigations unit, said about 400 pieces of merchandise were seized but no one was arrested. NFL brand officials issued warning letters and may be pursuing civil action, he said.

So King wasted thousands of man hours on an investigation that resulted in no arrests and no enforcement action of any import. America, and the National Football League, will survive some colored people selling t-shirts and ball caps, but not an invasion. Note that illegal aliens and employers of illegal aliens are not under investigation or subject to raids by ICE SVU in San Francisco.

This is quite stunning. ICE SVU does, or is supposed to, conduct immigration enforcement raids. Though his statement is true—his office, the San Francisco Field Office, does not do immigration enforcement, but that’s because King, and his predecessor, Ryan Spradlin, were openly defiant of orders from President Trump to start doing such raids. Work-site enforcement is part of ICE SVU’s duties, but I guess Customs puke King does what he wants, not what he is told. I wonder if his hands-off approach to immigration enforcement has the approval of Acting Director Albence?

But the defiance of President Trump and his immigration enforcement strategy is not limited to ICE SVU. It appears that ICE Enforcement and Removal Operations (ERO) is in on the sabotage. ICE ERO is openly telling illegal aliens not to be afraid of raids, because ICE doesn’t do raids.

And if they were not clear enough, ICE’s love letter to illegal aliens made it plain, don’t fear us, we are going back to the Obama Regime Administrative Amnesty, only illegal aliens with criminal convictions will be deported.

ICE makes targeted arrests every day; ICE does not conduct “raids”
ICE does not conduct raids or sweeps and does not operate roadblocks or checkpoints. The use of these terms evokes images of indiscriminate enforcement actions taken without probable cause. Nothing could be further from the truth. ICE focuses its limited resources first and foremost by targeting those who pose the greatest threat to public safety and border security, and our officers make arrests every single day. ICE does not target aliens indiscriminately; the agency conducts investigations and gathers intelligence on specific individuals and targets them for immigration enforcement based solely on their violations of federal law. Targets are most frequently those who were previously arrested on criminal charges or have blatant disregard for U.S. immigration laws. The agency’s arrest statistics clearly reflect this. Nationally, approximately 90 percent of all people arrested by ICE during fiscal year 2019 either had a criminal conviction, a pending criminal charge, had illegally re-entered the United States after being previously removed (a felony charge) or were an immigration fugitive subject to a judge’s final order of removal.

There we have it, a love letter to the “law abiding” illegal aliens that the Democrats are so fond of. Also of interest is the denial that ICE is in. Were not there raids just recently in Mississippi? Is ICE ashamed of arresting illegal aliens? What is wrong with raids, sweeps, roadblocks, and checkpoints? The U.S. Border Patrol operates roadblocks and checkpoints? The press release goes on to compare ICE officers and agents with police officers who arrest people without warrants:

Local police officers don’t need a warrant when they encounter someone breaking the law in a public space, and the same holds true for ICE officers.

So, local police also do sweeps and raids besides warrant-less arrests. If warrant-less arrests are OK for local officers, then sweeps and raids are also legitimate tactics for ICE to use to make arrests and deter others from committing immigration related crime. Why is ICE so fearful of using raids, sweeps, checkpoints, and roadblocks? Obtaining compliance with immigration law by frightening illegals by use of sweeps, raids, roadblocks, and checkpoints is a legitimate law enforcement tactic and nothing to be ashamed of, but ICE is ashamed of what they do.

To make things worse, ICE SVU decided to promote one of the organizers of a campaign by ICE Special Agents-in-Charge (SACs) to sabotage immigration enforcement in defiance of President Trump, Ryan Spradlin, from a GS-15 SAC in San Francisco to an Senior Executive Service (SES)-1 SAC in Dallas, TX.

U.S. Immigration and Customs Enforcement’s (ICE) Homeland Security Investigations (HSI) announced the appointment of Ryan L. Spradlin as the special agent in charge to head the HSI Dallas office, which oversees six offices in 128 counties in North Texas and the state of Oklahoma.

Spradlin’s primary goal in his new position is to increase public awareness of HSI and its capabilities. He also looks forward to increasing partnerships with law enforcement agencies to help keep Texas and Oklahoma residents safer.

“Our HSI special agents and intelligence professionals possess unique law enforcement authorities and expertise to lead or support many types of criminal investigations,” said Spradlin. “One noteworthy example, HSI has an extremely active program to rescue sexually exploited minors and pursue prosecution against their victimizers. But we also investigate members of transnational criminal organizations and enforce intellectual property rights laws to keep unsafe products off store shelves, to name just a few.”
Before arriving in Dallas in August, Spradlin previously served as the special agent in charge of the HSI San Francisco office beginning in 2015. In this position he was well-known for being tough on crime, stressing the need to prioritize public safety over politics; he was frequently asked to speak on combatting crime/victim advocacy.

He began his federal government career as a special agent with the former U.S. Customs Service where he worked on complex investigations ranging from international drug smuggling and money laundering to counter-terrorism. In addition to San Francisco, he has held positions in Atlanta, Washington DC, and New Orleans.

It is nothing more than ongoing sabotage. Is Stephen Miller not paying attention to the personnel decisions in ICE? Why are active opponents of immigration enforcement promoted, much less hired, by ICE? The sabotage by the anti-Trump Resistance in the bureaucracy is not being punished or suppressed. It is instead being rewarded. Why?