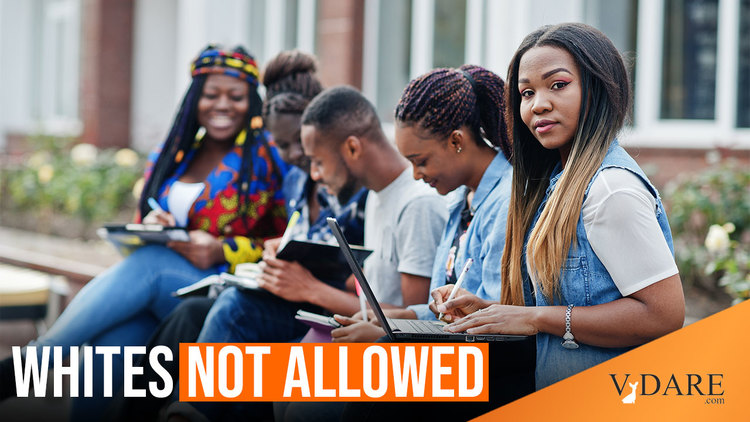 Earlier, 2003: The Michigan Mess: On Cognitive Dissidence About Quotas – And The Need For A Constitutional Amendment

The Supreme Court’s official justification for allowing college affirmative action programs to trample on the 14th Amendment’s “equal protection of the laws” clause is because diversity isn’t good for blacks, it’s good for everybody else because having lots of blacks in the classroom, even blacks who aren’t as bright as their fellow students, to share their diverse perspectives is so intellectually stimulating for everybody else.

But, over time, a trend is emerging for blacks to demand their own segregated Safe Spaces. From the student newspaper of American University in Washington DC:

Last semester, AUx launched its first Black affinity section for AUx2 after students spearheaded the effort and called for the creation of more safe spaces for Black students.

AUx2 is a course that all first-year students are required to take that examines race and racism — primarily anti-Blackness — and how it is manifested in socially constructed systems of power. The course also covers the intersectionality of race with other forms of oppression, as well as conversations on privilege and levels of access.

Like AUx1, AUx2 has peer facilitators in each class who assist the instructors in teaching the material. In the spring and summer of 2020, a group of Black peer facilitators began advocating for a Black affinity AUx2 section and were instrumental in its implementation…

Zoë Washington, a rising senior in the Kogod School of Business, was one of the AUx peer facilitators who called for a Black affinity AUx2 program.

… “We’ve definitely heard from Black students and other students of color that the material can be a lot for them because it is part of their lived experiences,” Stern said. “And we wanted to create a space where they could be together in community and have an overall positive experience with the course.”

But according to the Bakke and Grutter affirmative action decisions, that’s why most of you were admitted.

“One thing that I loved about the class was the community that it built,” Hector said. “Having an all-Black space truly changes the way you interact in that space and the level of comfort you feel.”

According to Stern, AUx conducted focus groups towards the end of the spring semester with each of the Black affinity AUx2 classes and surveyed all AUx2 students. So far, Stern said the feedback has been very positive, but some of the AUx2 students from the Black affinity sections have called for the AUx2 affinity sections to be taken a step further and expanded to other racial identities.

“Why don’t other minority groups get to have that experience?” Hector said. “Because it’s not just Black people that experience racism and that need affinity groups for these conversations because all people of color face that same experience we go through.”

Stern said that the AUx program is considering adding more affinity sections for different racial groups and hopes to do so soon.

Washington also agrees with potentially expanding the affinity program to more racial minorities, and even adding non-racially based affinity sections, such as a first-gen section or an all-female identifying section.

Eventually, the only students in a non-affinity segregated section will be straight white males, which will then cause a huge scandal over White Supremacist segregation. Because who could see that coming?

… “I would’ve wanted to find different ways to incorporate Black joy more to comeback to the trauma we encounter,” Stallworth said.

I’m guessing that when translated from Diversitese, “Black liberation and celebration” in an all-black classroom means somebody brought in a boombox and everybody got up and danced, which was probably a better use of the students’ time than whatever else was on the syllabus.

… “Students felt more comfortable sharing their experiences with other Black students because we could all relate, we could all understand and we weren’t sharing necessarily to gain something or to invalidate one’s experience,” Washington said. “We were sharing because we know we’ve all been through something similar.”

It’s almost as if Lewis Powell and Sandra Day O’Connor didn’t see that one coming.