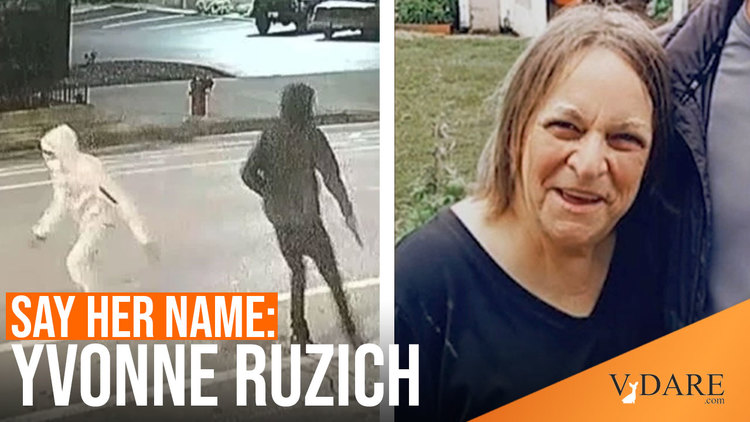 Her Name Is Yvonne Ruzich: While Waiting To Start Work At 4:25 A.m. At A Deli, 70-year-old White Grandmother "Randomly" Murdered By Two Black Males In Chicago

At a time when businesses across America are having to open later because of how few people are willing to work (instead sitting at home and enjoying free money from the government during this extended COVID-19 shutdown), a white grandmother was waiting in her car for her employer to open the deli where she worked.

It was 4:25 a.m., and 70-year-old Yvonne Ruzich was preparing to start her shift when two young blacks approached her car and “randomly” opened fire on her vehicle.

Teen charged in fatal shooting of 70-year-old woman outside of deli in Hegewisch, Fox 32 Chicago, August 27, 2021

CHICAGO – A 17-year-old male has been charged with the murder of a 70-year-old woman, Chicago police announced Friday.

The shooting occurred on Aug. 16 in the 13300 block of South Baltimore in Hegewisch.

Surveillance video showed the gunmen making a U-turn and pulling up behind Yvonne Ruzich, who was sitting in her car at 4:25 a.m., talking to her stepson in another car while waiting for her boss to open the deli that she worked at.

Moments later, two young men or teenagers, including the 17-year-old charged, walked up from behind and, without warning, began shooting.

Ruzich sped away, but lost control and hit a street sign about a block south.

The two gunmen chased her down and shot her five more times.

The juvenile faces one felony count of first-degree murder.

He was arrested Thursday and has been placed into custody.

Her name is Yvonne Ruzich. Outside of Chicago, where this black-on-white murder occurred, there’s almost zero information about what happened to her or who/whom committed the “random” murder of this 70-year-old white woman.

In the dying days of the American Empire, expect more of this “random” violence to start exploding nationwide. And expect the same silence from the regime media as was greeted by the news of Yvonne Ruzich’s murder by two black males.