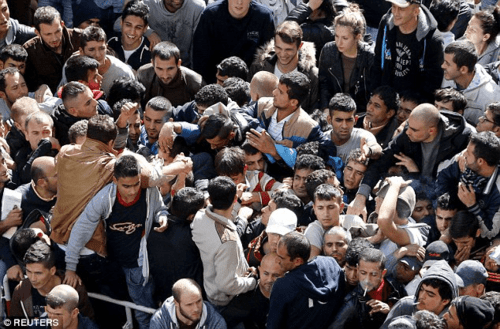 I see that thanks to Brenda Walker’s Congressman Babin’s Bill Opposing Syrian Refugees Is Noted blog yesterday we finally mentioned this interesting proposal.

This bill prohibits the admission of refugees into the United States until Congress passes a joint resolution giving the Department of Homeland Security authority to resume admitting refugees.

Requires the Government Accountability Office to report to Congress on refugees who received benefits under any of the following programs:

What a weird thing, considering the extreme danger that Merkel’s Muslim invasion will slop over into America – and the fact that the Central American Kidinvasion is continuing: Children entering U.S. illegally up in August: White House by Roberta Rampton, Richard Cowan and Doina Chiacu Reuters September 21, 2015

About double the number of Central American children entered the United States illegally in August compared to a year ago…the number rose to more than 4,000 in August from about 2,200 12 months earlier and 3,700 in July 2015, government figures show

Even odder, despite the issue being very hot in his own Spartanburg SC district (NY Times goes to Spartanburg, spin in first paragraph shows reporter’s bias by Ann Corcoran Refugee Resettlement Watch September 26, 2015) Congresscritter Trey Gowdy, chairman of the House subcommittee on Immigration and Border Security, has neither cosponsored H.R 3314 nor had any hearings on any aspect of the crisis at all (Refugee Resettlement Watch: Rep. Trey Gowdy must go beyond questions about refugee resettlement in his district to help other towns grappling with refugee overload May 5 20015). Instead he has been wasting time on the Benghazi hearings and making noises about supporting Marco Rubio for president.

Actually it is not weird or odd. The answer is in Diagnosis: South Carolina GOP Has Terminal ADD (Adelson Dollar Disorder). The big donors want Americas transformed and are very averse to anything that might stir up the peasants.

Gowdy is obeying his paymasters.

I intend to monitor cosponsors for H.R. 3314 from now on.