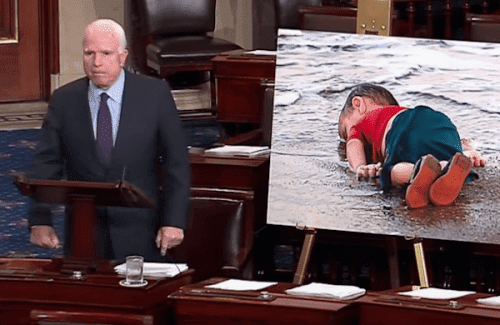 What an embarrassment it is for Arizona to have John McCain as its senior senator for all this time. There are the years of promoting permissive immigration and his promising as a presidential candidate to work for amnesty starting “the first day” in that office. Now he is moving on to refugee rescue.

McCain’s latest is using the photo of the dead Syrian kid to demand this country take in more refugees, despite the obvious national security threat from a population that cannot be properly vetted.

Plus the administration changed screening guidelines over a year ago so more Syrians could be admitted, including those with terrorist connections. Another problem is the new popularity of fraudulent Syrian passports so any Middle-Eastern-looking person can claim to be a victim refugee.

Furthermore the story about the drowned boy has unravelled considerably since the media raised a big squawk about it a week or so ago. Apparently the family members weren’t fleeing for their lives from Syria, but left safe Turkey seeking more money and dental implants for the father in Europe. Or something like that.

Senator McCain appeared with his open-borders pal Senator Graham on the Fox News morning show Saturday, where Tucker Carlson asked the questions about the push from elites to force many thousands of Syrian refugees on Americans. Incredibly, Graham twice dragged out the old Statue of Liberty canard to make his point, as if the 19th century work of art (titled Liberty Enlightening the World) has anything to do with immigration or refugee policy.

Both senators maintained they wanted to keep out the jihadists, but had no specifics about how that might be accomplished in a situation of so much chaos and fraud. Not reassuring.

CARLSON: Is allowing any refugees at all into this country in the best interest of Americans? Well, joining us now Senator Lindsey Graham of South Carolina, also a Republican presidential hopeful, as well as Senate Armed Services Committee Chairman John McCain. Welcome to both senators, good to see you. Senator McCain, first to you. It sounds like the overwhelming majority of these refugees, at least the ones fleeing Syria, are men. Probably a lot of them are combatants, that makes sense. Why is it in the interest of Americans to have them come here?

McCAIN: Well, we have always welcomed refugees under certain circumstances, but Tucker you raised the salient question here is you gotta know who these people are and to be screened. They have to be carefully examined before they would have any chance of entering the United States. If I were Mr Baghdadi I might be sending a few of my recruits as refugees to be able to come to United States.

So before we do anything I want to be sure that there is a process that makes sure that they should not going to be people that endanger the country but one other point, Tucker, this is the result of a failure of leadership. This is a result of the failure of a feckless foreign policy that has caused the greatest humanitarian crisis since World War Two. I want the problem solved and that means destroying ISIS, that means unseating Bashar Assad and that means getting up a foreign policy and strategy that would defeat the cause of this problem.

CARLSON: Right let’s that makes absolute sense. Senator Gramm to you, of course the US has let in more refugees than any other country over the past 100 years, but if you’re an American whose kids go to school that’s not that good, you pay too much in taxes, why will allowing refugees from this crisis into US to settle, how will it improve your life? Why should you be in favor of that?

GRAHAM: Well, we’re Americans. We’ve taken two thousand Syrian refugees. Two hundred and thirty thousand people have been killed in Syria. Women are being gang-raped by the thousands, so I would like to think that America’s a special place, that Americans have welcomed people in the past who have been fleeing oppression — go read what’s on the Statue of Liberty — I want to balance our national security against our character and — go read what’s on the Statute of Liberty — but I want to do one thing: destroy ISIL.

CARLSON: Senator McCain, when you read stories about law enforcement in say, Minneapolis, having to deal with people joining ISIS — that’s a result of our refugee resettlement policy — and you don’t worry a lot about that happening again or to a greater degree?

McCAIN: I worry a great deal, I worry enormously. As I said, I want to make sure that anybody who comes to this country from anywhere under any circumstances but particularly this group of refugees. And I think we have ought to have a debate and discussion in the Congress, not an arbitrary decision by President Obama. I’m not for unleashing a flood of refugees in this country.

Don’t get us wrong here Tucker, let’s not let’s not misportray especially what I’m saying. There are some refugees that I think we could take into this country as we have, as we did after the Vietnam War and we have in other places but they have to be sure that they are not a threat to the United States of America. Now what has happened is people have been recruited and radicalized by the internet. You’re talking about two different problems here, my friend.

CARLSON: Gentlemen, thanks for joining us this morning.