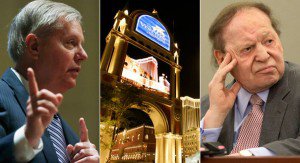 As I observed Lindsey Graham Boasts Of Being Bribed To Betray GOP Base On Immigration if there is a virtue pertaining to the loathsome Lindsey Graham (Traitor – SC) it is that he is publicizing the crucial and increasingly blatant role of leftist Jewish money in debauching the American political process, particularly in the GOP.

(Close readers will note that I am dropping the appellation of Lindsey Graham (Scalawag –SC). That is because Scalawags could at least to be said to be reverting to the concept of the former United States. What formulation of America does Lindsey Graham advocate?)

What Lindsey Graham: As president, ‘I would veto any bill’ without path to citizenship by Jessica Chasmar The Washington Times Friday May 8, 2015 proves is

There is simply NO WAY in which advocating citizenship for amnesty recipients would be popular with GOP voters – regardless of the situation in November.

But this is the AdelZuck primary. GOP voters have been repressed.

I continue to stand by Will “Sheldon Adelson Minion” Lindsey Graham Come Out As First Gay Presidential Contender?

That will really mess up the MSM.