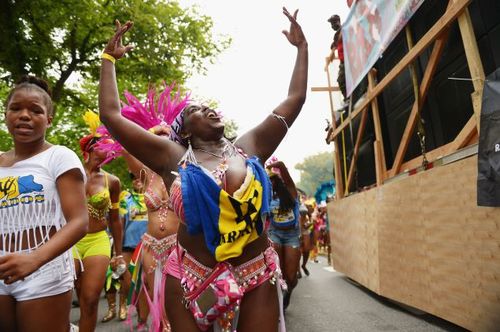 Cuomo: Must Have Gun Control Across 50 States (Because We Couldn't Possibly Suspend the Annual West Indian Day Shootout in NYC)

Gov. Andrew M. Cuomo, during a fiery eulogy on Saturday for a lawyer in his administration who died after being shot in the head, implored New Yorkers to carry on the slain man’s mission by reforming schools, fixing public housing and, above all, demanding stronger federal gun laws.

Mr. Cuomo’s remarks came in a 17-minute address delivered at the funeral of the lawyer, Carey W. Gabay, 43, who was apparently caught in a shootout between rival gangs during a pre-dawn celebration that was a precursor to the annual West Indian American Day parade in Brooklyn.

From the New York Observer:

A day after violence surrounding the annual West Indian Day Parade left one man dead and a Cuomo administration aide in critical condition, a trio of City Council members declared that the annual celebration is still safe.

Councilwoman Vanessa Gibson, the chairwoman of the City Council’s public safety committee, and local Council members Laurie Cumbo and Jumaane Williams issued a joint statement this afternoon that also called for more state and federal efforts to combat gun violence. They asked for further unspecified improvements to the Brooklyn parade.

“Statistically speaking, last year’s West Indian American Carnival celebration was the safest in recent history, and early reports indicate that this year’s was even safer–but statistics are of little comfort to the friends and families of those whose loved ones were hurt in the weekend’s senseless violence,” the Democrats said.

In the early morning hours before the parade, Carey Gabay, a first deputy general counsel at the Empire State Development Corporation, was shot in the head. Mr. Gabay, 43, was caught in the crossfire of two gangs, police said. A 24-year-old man was also stabbed to death shortly before near Grand Army Plaza. …

The parade, which brings thousands to Brooklyn’s Eastern Parkway and is regarded as the signature celebration of the city’s growing Caribbean community, has been marred by bloodshed before. Last year, a recent parolee opened fire into a crowd of revelers, killing one man and wounding several others. In 2013, a 1-year-old boy sitting in his stroller was killed by a bullet meant for his father.

Mayor Bill de Blasio dismissed any talk of ending the pre-parade festivities where violence tends to break out. Mr. Williams and Ms. Cumbo, who represent large swaths of Brooklyn’s Caribbean-American residents, also did not mention that possibility in their statement.

On iSteve back in 2011, I quoted Wikipedia’s entry on the celebrations:

In 2003, a man was fatally shot and another was stabbed in the neck.[4][5] In 2005, one man was shot and killed along the parade route. In 2006, one man was shot and another was stabbed. By the 2007 parade, there was only one report of violence, when a man was shot twice in the leg.[6][7]. In 2011 pre-dawn marches took a violent turn with the murder of one person, five instances of gunshot victims and three instances of stabbings coupled with sporadic shooting at crowds of people.

There was a big scandal in the press that year when a lot of NYPD cops posted on Facebook how sick they were of getting assigned to this idiotic event.