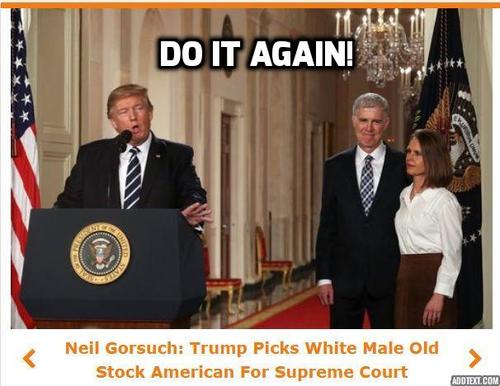 Anthony Kennedy Retires, Trump Needs To Replace Him With A Conservative White Male

Anthony Kennedy is retiring. Kennedy, appointed by Ronald Reagan after the successful attack on Judge Bork,  was known as a "swing" Justice--he might vote liberal, or he might vote conservative.

I recently wrote that

The Supreme Court has upheld Trump's "travel ban" prohibiting people from some but not all Muslim countries from coming to America.

The decisions by various judges blocking it were always crazy--see #NeverTrumper David Frum On Why The Hawaiian Judge Attacking Trump's Travel Order Is Crazy.

The Supreme Court proved to not be crazy...by a vote of 5-4.

Kennedy was one of the 5--the 4 were Sonia Sotomayor, Stephen Breyer, Ruth Bader Ginsburg and Elena Kagan.

Before the election, law professor Mark Tushnet [Email him] wrote a post titled "Abandoning Defensive Crouch Liberal Constitutionalism," about the cases that could be overruled following a Hillary victory and the appointment of a Leftist Justice to the vacancy left by Scalia.

John Derbyshire discussed it here (lengthy quote from him)

With a solid liberal majority on the Supreme Court, justices should, Prof. Tushnet tells us:

That's an executive summary of Prof. Tushnet's prescriptions last May at Prof. Balkin's blog. He closes with the following, quote:

Of course all bets are off if Donald Trump becomes President. But if he does, constitutional doctrine is going to be the least of our worries.

Oh, I do hope so, Professor!

All of which is by way of reminding you of the stakes involved in a Supreme Court pick. When Trump nominated Neil Gorsuch, I blogged about it under the heading Neil Gorsuch: Trump Picks White Male Old Stock American For Supreme Court. Trump can do that again.