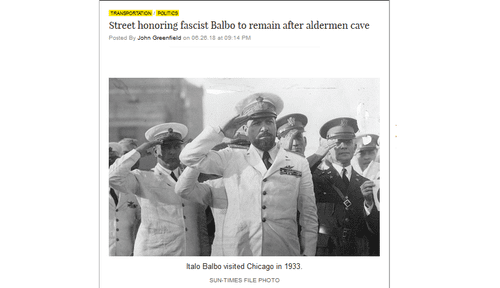 This story involving renaming Chicago streets involving Mayor Rahm and Chicago alderman will be pretty funny if you have experience driving around Chicago’s Loop. Otherwise it might seem baffling, but I’ll try to make it clear.

Back in the 1980s when I’d drive down to the Chicago Art Institute in lakefront Grant Park, I’d usually wind up parking on Balbo Drive, a street that runs mostly east-west through the park and then into the South Loop for a couple of blocks. There has recently been a move to rename Balbo Drive due to accusations that Balbo was a Fascist.

The term “Fascist” gets thrown around a lot these days, but in this case it’s utterly apt.

Balbo Drive is named after General Italo Balbo, a Fascist Blackshirt and aviator, Mussolini’s aeronautical minister and perhaps heir apparent until his death in a friendly fire incident in North Africa in 1940.

Even somebody as unwoke as me in 1985 would think to myself while parallel parking: “They’re going to change the name of this street eventually, right?”

But, so far, it’s still Balbo Drive, and there’s a Balbo Monument near Soldier Field donated by Mussolini.

Balbo caused a sensation at the 1933 Chicago world’s fair by flying in from Europe in a fleet of a dozen Italian seaplanes and landing on Lake Michigan. Balbo was the toast of Chicago.

Even his facial hairstyle became known as the Balbo Beard and is still worn under that name today.

You might thing that would be a slam dunk in 2018.

Aldermen plan to call for Congress Parkway downtown to be renamed in honor of crusading African-American journalist and anti-lynching activist Ida B. Wells-Barnett, in a move to try to prevent an election-season clash with Italian-American Chicagoans.

Lately, white people like author Laura Ingalls Wilder and Father of Silicon Valley Fred Terman have been getting the damnatio memoriae treatment for rather exigent crimes against political correctness, such as being the son of IQ pioneer/eugenicist Louis Terman (while Louis was totally wrong about heredity being important, his son Fred inherited his name and thus has been punished by the Palo Alto school board. After all, what did Fred Terman ever do for Palo Alto real estate values?)

In contrast, while the F-word gets thrown around pretty carelessly these days, Balbo was a genuine Fascist, one of the four main subordinates in Mussolini’s coup of 1922 and Il Duce’s expected successor.

But for purposes of whether or not he gets his name stripped off a public honor like Laura Ingalls Wilder, Balbo wasn’t so much racially white as he was ethnically Italian. During 2018′s Flight from White, that actually matters. Sure, he was a genuine Fascist, Mussolini’s arch-henchman, but he wasn’t some white supremacist, he was an Italian genuine Fascist. That’s kind of, you know, like … diverse!

And, remember, it’s not as if Balbo was some nativist loser who lived here … he flew in to America, which makes him sort of an immigrant.

I hope you’re not anti-immigrant, are you?

Previously, some aldermen had wanted to rename Balbo Drive downtown for Wells-Barnett.

But some Italian-American groups opposed taking the honor away from Italo Balbo, a pilot who flew from Rome to Chicago in 1933 for the Century of Progress Exposition and who was an ally of Italian fascist leader Benito Mussolini. They say the flying feat should be considered separately from his association with the dictator.

Now, Wells-Barnett supporters on Wednesday will introduce a compromise proposal to the City Council to change the name of Congress. The parkway runs west from near Grant Park downtown to connect with the expressways at the Byrne Interchange.

Mayor Rahm Emanuel notably had not endorsed the plan to take the name from Balbo, saying only that he understands the “spirit and energy” behind the ordinance and wants the city to recognize Wells-Barnett. A spokesman for the mayor did not respond to questions about whether he endorses the Congress compromise.

Aldermen likely would get their say on the proposal next month. Renaming a Chicago street is rare, and the push to officially rename Congress for Wells-Barnett is different from the many honorary street designations found across the city.

Congress emerged as a likely compromise because of its prominent downtown location and the fact few businesses on the street will need to pay to change their stationery and advertisements. Downtown Ald. Brendan Reilly, 42nd, said Congress has just five addresses.

So, Congress Parkway is the second easiest major street in downtown Chicago to change the name of after Balbo Drive.

… “It’s definitely a bigger street (than Balbo), and I think it’s a street that recognizes the great accomplishments that a woman like Ida B. Wells deserves,” King, 4th, said. “I think it’s an appropriate street; it’s a very large street that goes down the middle of the city.” …

Chicago used to have a giant monument to Mother Cabrini — the Cabrini-Green public housing project near the Magnificent Mile — but, as I may have mentioned once or twice on this blog, they tore it down.

The newly renamed street could cause potential confusion because it intersects with Chicago’s existing Wells Street. Reilly said he’s confident that can be mitigated, perhaps by spelling out the full name “Ida B. Wells” on the east-west thoroughfare’s signs.

Uh-oh … There already is a Wells Street in the Loop, just a block west of Michigan Avenue. Having two Wells downtown will cause untold confusion and probably get a few people per decade killed in car crashes. I’d suggest renaming Congress Parkway as a nice, simple, friendly “Ida Parkway.” But that likely won’t happen because the prospect of a few blood offerings to the anti-lynching crusader of random motorists and pedestrians appeals to the tastes of our time.

“We’d like to honor Ida B. Wells without controversy, because she deserves it, and her legacy deserves it,” Reilly said.

Joint Civic Committee of Italian Americans President Enza Raineri said last week that the organization wants to see Wells-Barnett “honored in a grand way.” But she said taking the street name away from Balbo isn’t the way to do it.

“History is history, and we need to learn from it,” Raineri said. “And Chicago has a special part in history because of that flight.”

On Tuesday, Raineri said she was “absolutely thrilled” about the plan to rename Congress for Wells-Barnett, but she didn’t answer directly about whether her group would consider supporting the renaming of Balbo Drive for another Italian-American.

“Right now, I think we should just be thrilled Ida B. Wells is getting this honor,” Raineri said.

King said last week that the upcoming city elections could be making officials leery of taking up the contentious issue.

“I think that probably plays a part,” she said.

Can you imagine if this controversy were instead over whether to rename as “Ida B. Wells” some street currently named not after an Italian Fascist bullyboy but after some random honorable Chicago-born non-ethnic white, say, geneticist James D. Watson, and the Joint Civic Committee of White Americans threw a hissy fit over white people being dissed?