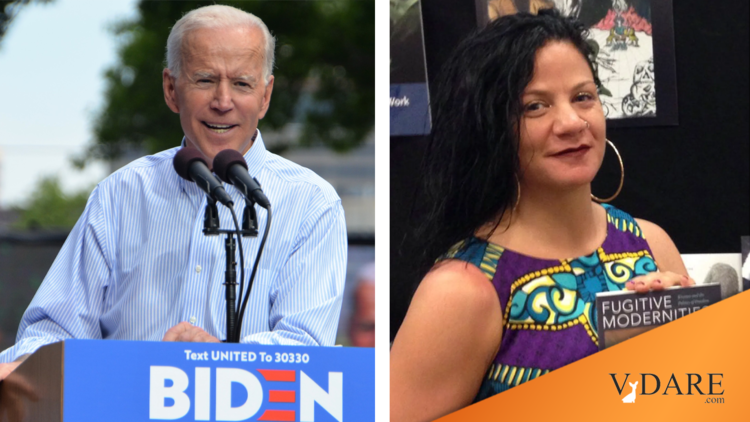 Earlier on Jessica Krug: White Jewish Professor Pretends for Years to be Puerto Rican: Did She Do It for the Affirmative Action or for the Giant Hoop Earrings?

Joe Biden needs a Sister Souljah moment in which, like Bill Clinton, in 1992, he picks out and denounces somebody for being too radical on race. But whom? Last week, I recommended Willie/Vicky Osterweil, author of the new book “In Defense of Looting” for the role. But this Professor Jessica Krug could be a better candidate:

EXCLUSIVE: Race faker Jessica Krug hailed the bodega murder of a 15-year-old member of NYPD youth program who wanted to be a cop as a ‘revolutionary moment’ claiming he was targeted because ‘snitches get stitches’

By BEN ASHFORD FOR DAILYMAIL.COM

Race faker Jessica Krug was applauded at a university conference when she hailed the murder of a 15-year-old boy hacked to death outside a New York bodega as a ‘revolutionary moment’ because he wanted to be a cop, DailyMail.com can reveal.

Lesandro ‘Junior’ Guzman-Feliz was chased though the Bronx and butchered with machetes by a Dominican street gang who mistook him for someone else in a notorious 2018 killing.

But speaking on a Columbia University panel, Krug dismissed Guzman-Feliz, a member of the NYPD’s Explorers youth program, as a ‘collaborator’ who worked against his own community and was targeted because ‘snitches get stitches’.

‘It’s so much more difficult to understand what kind of freedom we could achieve by being willing to confront those who are working against the interests of the community,’ she said, going unchallenged as she appeared to endorse the grisly murder. 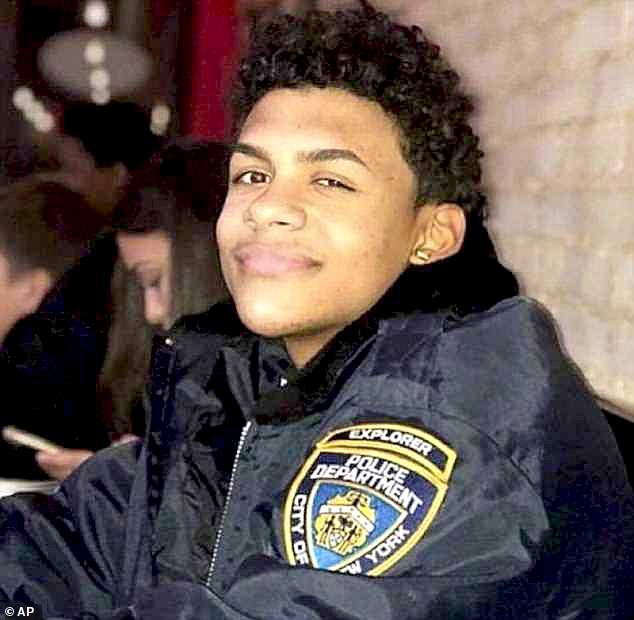 Krug, 38 – a white, Jewish woman from Kansas City, Missouri – admitted last week that she had pretended to be black for decades while becoming a prominent opponent of systemic racism and a professor of African Studies at George Washington University.

‘How many people are familiar with Lesandro Guzman-Feliz, a 15-year-old boy who was murdered in the Bronx last year,’ she says in a 2019 video clip revealed by DailyMail.com.

‘So if you’re in New York you probably heard a lot about this. And the narrative around it is that he was an innocent kid who was mistaken for a bad kid. He was the kid who was hacked apart with machetes in front of a bodega in the Bronx,’ she says.

‘The idea is that he was mistaken for someone else by Trinitarios, right, who come out of Rikers [Island jail] as most of the radical politics of New York City has done for many, many years.

‘But the part of the story that gets emphasized in different ways is that he was an Explorer, right, which is a program that the NYPD has to bring youth in to eventually work for them.’

Krug compared the frenzied attack to ‘necklacing’, the gruesome execution method used to punish black police informants in Apartheid-era South African where a rubber tire filled with fuel would be placed round someone’s neck or chest and set ablaze.

‘When I think about this politics of silence that I’m talking about in the archives and about how silence can be a really radical presence historically, I think it’s a radical presence today when people talk about snitches get stitches or when we think about a history of anti-apartheid struggle in South Africa and necklacing,’ she goes on.

‘That kind of violence against people who are collaborating or working against their communities we have to consider a radical moment in 2018 in which people are using machetes to hack apart a 15-year-old boy who’s working with the police.

‘The way the story about his innocence and the inherent violence about the people who hacked him apart become the narrative we tell, about how the loss of innocence is the story we mourn, and it’s so much more difficult to understand what kind of freedom could we achieve by being willing to confront those within the community who are working against the interests of the community as a whole at the end of a machete.’

The clip revealed by DailyMail.com ends before anyone has had a chance to ask questions but as she wraps her remarks Krug receives an enthusiastic round of applause.

She was listed as a speaker at an April 2019 event hosted by the college’s Black Studies Department to discuss ‘social solidarity and activism now taking shape across the African diaspora’.

One problem for Joe is both of the candidates, Osterweil and Krug, are Jewish.

Another is that Krug no doubt benefited from affirmative action, the existence of which Democrats and the media try to memoryhole.

Note that practically nobody in the press has mentioned racial preferences in connection with Krug.