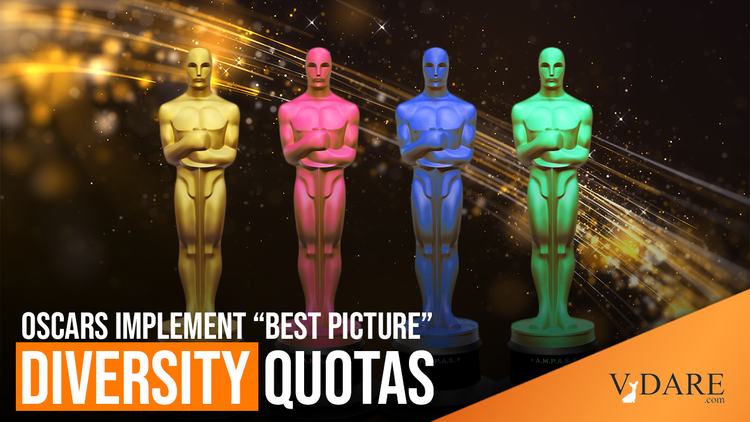 Earlier: Plaques for Blacks at the Golden Globe Awards and Awards Show Cancelled Because No Blacks Won

And the Oscar goes to … inclusion.

In the latest step in its ongoing effort to boost diversity both within its own ranks and across the film industry, on Tuesday the film academy announced new representation standards for films to be eligible to compete for best picture.

Developed over the past few months by a special task force as part of the organization’s Academy Aperture 2025 initiative, the standards encompass both representation onscreen — in the types of stories being told and the actors involved — as well as behind the scenes in the makeup of the crew and in the inclusivity of the companies involved.

To be eligible for best picture, a film must meet at least two standards across four categories: “Onscreen Representation, Themes and Narratives,” “Creative Leadership and Project Team,” “Industry Access and Opportunities” and “Audience Development.” Within each category are a variety of criteria involving the inclusion of people in underrepresented groups, including women, people of color, LGBTQ+ people and those with cognitive or physical disabilities. (Other Oscar categories will not be held to these same standards, but the contenders for best picture typically filter down to other feature-length categories.)

Previously, the only standards to qualify for best picture involved a film’s running time (over 40 minutes) and specifics about how, where and when it’s screened in a public venue.

It’s hard enough to make good movies as it is. Is adding more bureaucratic obstacles to the process like these new Diversity guidelines going to help more good movies get made?

Most of the best movies of 2019 were close to all white:

Good movies tend to be period pieces that are fairly honest in their depictions. How exactly are you supposed to wedge Diversity into times and places where it didn’t exist?

“Diversity” used to mean, well, diversity. But now it means Not Whiteness.

That’s what “diversity” used to mean: being diverse. Now, Diversity means: black is best and white is worst.

A 100% Korean movie like “Parasite” represents Diversity. The only way “Parasite” could be more Diverse is if the cast were all black.

In Tom Wolfe’s “Bonfire of the Vanities,” the NYC mayor asks his chief of staff what’s on the agenda: “Whadda we got this morning, Sheldon?” “Mainly plaques for blacks,” said Sheldon….

Mexican-Americans are definitely under-represented: they aren’t even in Fast & Furious movies. Puerto Ricans and Cubans are often cast as Mexicans (e.g., Jennifer Lopez as Selena, Benicio del Toro’s Oscar-winning Mexican detective in Traffic). But nobody cares.

Oscar movies are mostly a luxury product subsidized by the huge revenue on comic book movies and the like. You could argue that the nonwhite masses are unfairly paying for talented whites to make high quality movies that, lacking in capes and explosions, bore them.

The problem of the moment in culture is that most of the great things of the last 600 years were accomplished by today’s most hated minority, white men.

Wouldn’t it be simpler just to hand out an Oscar every year to “Best Black”?