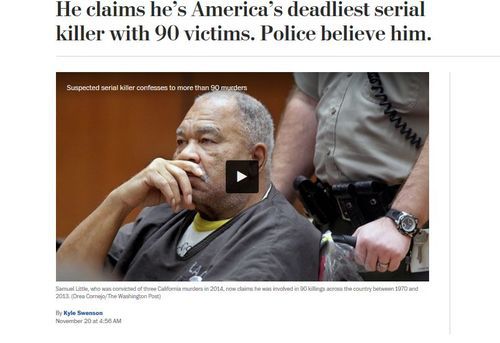 This story about black serial killer Samuel Little does not use the words "black" or "white" except in reference to a victim's dress:

A group of friends slashing their dirt bikes through the woods outside Saucier, Miss., found Julia Critchfield. It was January 1978. The 36-year-old mother of four was naked, her body sprawled on a roadside. She had been strangled. Her killer had draped a black dress over her frame.

Nearly 500 miles away and four years later, Rosie Hill’s body was discovered near a hog pen in Marion County, Fla. The 21-year-old was last seen four nights earlier leaving a bar with a stranger in August 1982. She also had been strangled.

Nearly 700 miles west, Melissa Thomas turned up in a church cemetery in Opelousas, La. It was January 1996. Again, strangled.

The three cases — separated by hundreds of miles and spread over three decades — each stumped local law enforcement. Eventually, the crimes slid into obscurity. The passing years chipped away at witnesses’ memories. Evidence sat in storage, or was misplaced, or swallowed up by hurricanes. Family members mourned publicly, then sank into the private ritual of grieving for the victim of an unsolved crime. Over the years, cold case detectives would try to kick loose new information. A local television station might run a story to mark a grim anniversary.

Unknown to anyone, there was an invisible thread running through each murder — and possibly many more. Authorities only learned about the link this summer, when a 78-year-old serial killer began talking in his Texas jail cell.[More]

A brief list of VDARE.com posts on this subject:

Check out our tag on black serial killers. Also this archive.