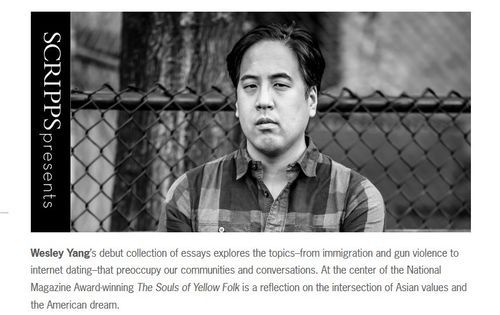 From my new book review in Taki’s Magazine of Wesley Yang’s fine collection of essays entitled The Souls of Yellow Folk:

My impression from hints Yang has dropped is that he has tried out numerous self-improvement regimens of the kind that attract right-wing men, such as the study of pick-up artistry (the subject of one essay in his book), weight lifting, and the wisdom of Jordan Peterson...

A tweet by Yang endorsed the opening of weight-lifting coach Mark Rippetoe’s increasingly famous book Starting Strength: Basic Barbell Training as “one of the great lead paragraphs in any nonfiction book”:

Physical strength is the most important thing in life…. A weak man is not as happy as that same man would be if he were strong. This reality is offensive to some people who would like the intellectual or spiritual to take precedence. It is instructive to see what happens to these very people as their squat strength goes up.

Rather like another Rippetoe fan, Nassim Nicholas Taleb, Yang appears to be moving from the center to the right over the decade of essays in his book.