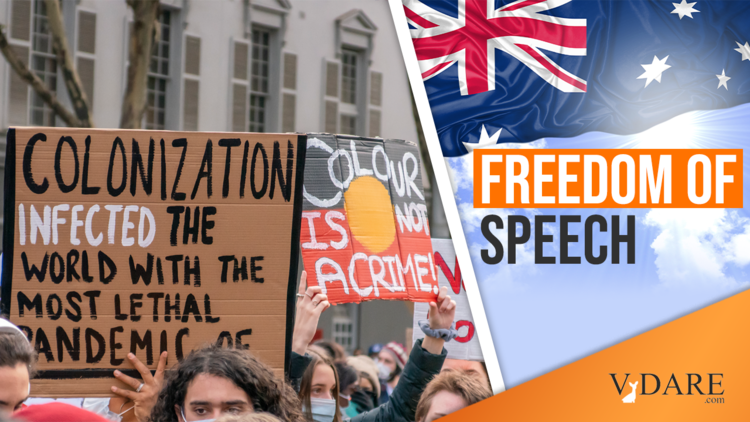 Australia’s citizenship test has just been revised to include an applicant’s understanding and acceptance of “national values,” and the woke left is, naturally, having a fainting fit at the very concept of national values which, according to the logic of  anti-Western, anti-White “global citizens,” must be xenophobic and aimed at  the “government’s use of citizenship as a mechanism of exclusion of marginalized colored peoples from a wickedly white Australia [The new Australian citizenship test: can you really test ‘values’ via multiple choice?, by Alex Reilly, The Conversation, September 22, 2020].

In what is basically a policy sop to the populist masses who don’t think that Australian citizenships should be handed out like confetti, the new test bar hasn’t exactly been raised to Olympic heights.  The newly added questions on national values are multiple-choice and they are all no-brainers such as the importance of voting and the importance of speaking English, whether violence is justified in response to perceived offense or political disagreement and whether a husband is entitled to physically punish his wife if she has disobeyed or disrespected him, the importance of “mateship” (“we help each other in times of need”) and whether the lawful actions of the police should be supported, and whether freedom of speech should be respected.

Just in case the correct answer doesn’t stick out like a dog’s hind leg, the government has helpfully provided a “resource booklet“ and online practice tests with the correct type of answer.  Those who still struggle with the test will presumably be coached by immigration advocates or their ethnic kin who know the ropes.  So citizen-hopefuls from certain countries and cultures (think Nigeria, not Norway, for example) will simply lie on the values test whilst continuing to retain their backward, illiberal, anti-democratic and un-Australian beliefs and cultural ways.

There is, however, one group of people who would fail the new citizenship test—angry woke white Australians.  As VDARE.com’s  Lance Welton has valuably documented from the scientific literature (here, here and here, for example) concerning their American counterparts, particularly the young female variety, the “aggressive, virtue-signaling, emotionally-incontinent woke liberal” often develops the clinical symptoms of a real politico-psychological disorder.  Full of moral self-righteousness and militant denunciation of blasphemy against the “social justice” catechism, the angry woke liberal’s default mode of discourse is  profanity-laced rage derived from political resentment whilst their tactical debating armory in the Culture Wars is based on their preferred weapons of mass silencing—Big Tech censorship, cancel culture and no-platforming.

When faced with, for example, the question:

Which of these statements best demonstrates Australian values about freedom of expression?

the angry woke liberal, based on their actual political behavior and culture wars practice, may be torn between the two incorrect answers (b and c) but they should definitely rule out the correct answer (a) and would thus fail the citizenship test.

As a nation giveth citizenship (as a privilege, hard-earned) so, too, should it be able to taketh away.  The angry woke liberal should be high on the latter list of candidates.