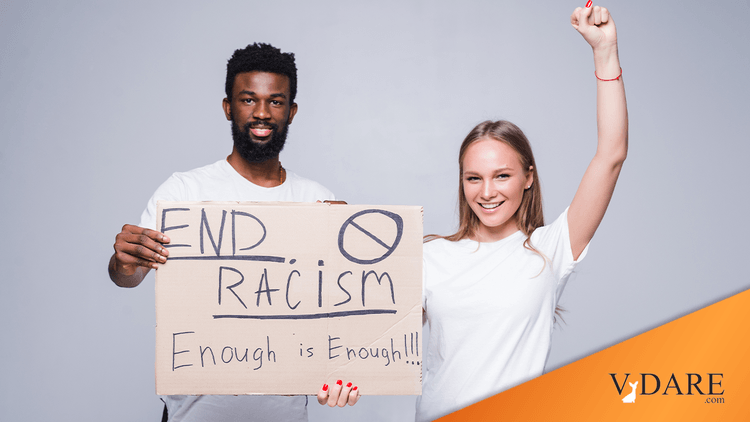 From: Chris Roberts, Director of Special Projects at American Renaissance [Email him]

I only just now noticed that back in August, John Derbyshire addressed a blog of mine at American Renaissance: "What Is Wrong with White Women?"

1) Mr. Derbyshire credits me with coining the phrase "Mad Sow Disease"—but I must confess: that was the brainchild of my fearless leader and editor Jared Taylor.

2) The Derb mentions that many of the woke women in the photos I put together are attractive, and maintains that in general, plenty of woke women are good looking. I agree, but it seems as though Mr. Derbyshire thinks I disagree, writing:

"I must say, though, with all proper respect to Chris, who is doing God's work over there at AmRen, I must say that the women in those thirty-odd pictures at the AmRen post are, for the most part, not unattractive. Their figures are trim and their features, so far as you can tell with all the masks, pleasant and regular." [Radio Derb: Kamala Controversies, United States Of Antifa, And Totalitarianism Lite, Etc., August 14, 2020]

I appreciate his praise, but again, I'm not sure why he thinks I believe woke women are unattractive. In my blog, I noted, "White women—young and old, fair and homely, around the world—especially lack a racial consciousness." [emphasis added]

At any rate, let me state for the record:

Among the fairer sex, I have never found a strong correlation between beauty and political beliefs. Many insufferably woke women are hot. For better or for worse, I know (in the Biblical sense) this to be true.

John Derbyshire replies: The connection between female attractiveness and political orientation is one of those mysteries, like the origin of the universe or the nature of consciousness, that will forever elude our understanding. There are some doors Man was never meant to open.

I pushed at this particular door twenty years ago, at the beginning of the Bush 43 Presidency.

The main thing that caught my febrile adolescent attention was the very striking difference in the female population of these two political tribes. The conservative women were much prettier, but the socialist girls were much looser. The star of the latter set was actually a girl named … well, never mind her name. Her nickname was "Nookie," and for very excellent reasons. Though far from being a beauty queen, and even further from being obsessive-compulsive about personal hygiene (regarded in this set as a contemptible bourgeois affectation), this young lady, not to obscure the matter behind any veil of false delicacy, banged like an outhouse door in a force nine gale. Well, youth has its own priorities. I became a socialist, and remained one well into my twenties.

I have shaken off my youthful leftism, but not the conviction that conservative women are prettier, and more moral, than their sisters on the Left. [Hillary's Style Crash, National Review Online, February 6, 2001]