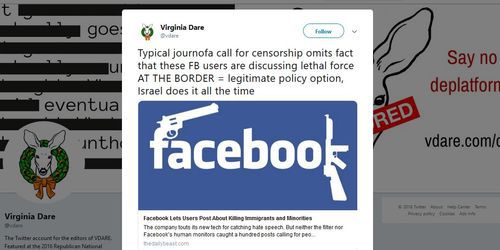 A Normally Friendly Reader Flinches From Lethal Force At The Border; Peter Brimelow Asks If Americans (Unlike Israelis) Should Be Guilted Out Of Their Country?

"Typical journofa call for censorship omits fact that these FB users are discussing lethal force AT THE BORDER = legitimate policy option, Israel does it all the time"

Typical journofa call for censorship omits fact that these FB users are discussing lethal force AT THE BORDER = legitimate policy option, Israel does it all the time https://t.co/tkPjb5m8nV

Lethal force at the border is only justified for the same reason it's justified anywhere else in the US: in order to neutralize an imminent threat of death or bodily harm by a criminal aggressor. Shooting nonviolent people is illegal and, especially when it comes to nonviolent children, morally reprehensible. Securing the border is not mutually exclusive with refraining from excessive force. Unless you fire the idiot who posted this and publicly apologize, VDARE.com will have lost all moral legitimacy with this tweet.

VDARE.com Editor Peter Brimelow replies: I’m sorry that this reader, normally friendly, is upset. But not everyone is perfect.

I believe, to the contrary, that it is precisely because VDARE.com is prepared to think the (to the conventionally-minded) unthinkable that we have “moral legitimacy.”

Seven Palestinians were killed in violent protests along the border fence, in a continuation of the "March of Return" protests. According to the IDF, "The rioters are burning tires and are hurling rocks, explosive devices, firebombs and grenades at IDF troops and the security fence".[254] The demonstrations were arranged by Hamas, with the aid of special units formed to expand the protests. Four Palestinians were shot dead after they crossed into Israeli territory and approached a sniper's post.[255]  (Emphasis added).

Of course, Conservatism Inc. has responded to the contrasting Israeli and U.S. border crises with complete hypocrisy—one reason that it no longer has “moral legitimacy”: 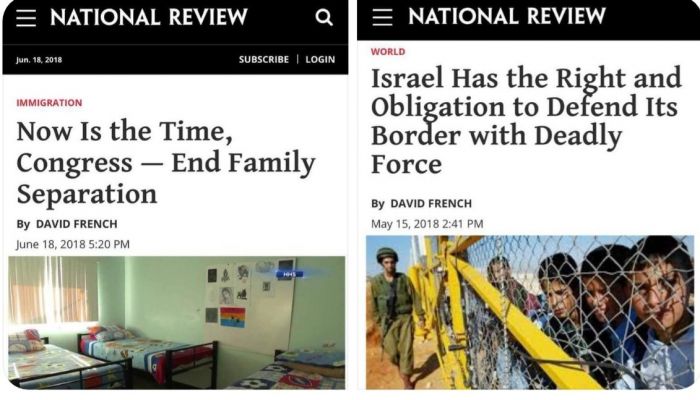 At VDARE.com, we won’t do that. We commend the Israelis for refusing to be guilted out of their country (see here and here) and for having the moral courage to face one implication: lethal force at the border.

I said after witnessing President Trump’s inauguration that the Left’s hatred for America would come to blood—as it already has, e.g. with the GOP Congressional baseball team shooting, which of course went straight down the MSM Memory Hole.

Maybe the southern border is the place to start.