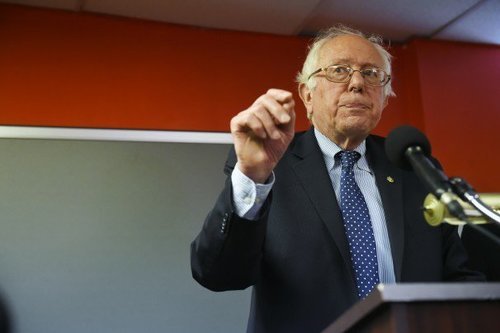 In Europe, the talk is of rising right wing nationalism and left wing revolution [Europe’s leaders are openly worrying about ‘violence’ and ‘revolution’ if Greece goes wrong, by Jim Edwards, Business Insider, July 17, 2015]. And the center can’t hold even in the United States, as the rise of Donald Trump in the GOP primaries and Vermont Senator Bernie Sanders among Democrats shows the instability of the American political system [Candidates caught in the middle as words ring hollow to activists, by Jonathan Martin and Maggie Haberman, New York Times, July 25, 2015]. Yet even as onetime President Presumptive Hillary Clinton faces an unexpected challenge, economically struggling Americans should not be fooled—the self-proclaimed socialist Sanders stands for business as usual when it comes to the most regressive issue of all: mass immigration.

This may seem surprising. Sanders, an “independent” who caucuses with the Democrats, has occasionally spoken sense on immigration. He has openly identified the desire for cheap labor motivating the corporate push for more foreign guest workers, even in jobs like ski instructors or lifeguards that could easily be filled by American students. Sanders rails against stagnant wages for high-skilled workers, high unemployment for low-skilled workers (especially nonwhite Americans). He understands that, in his words, “If you need to workers in a certain area, you need to raise wages.”

Indeed, Numbers USA awards Sanders a relatively high “B+” rating for opposing “unnecessary worker visas” over the course of his career and an “A+” for his recent efforts to reduce the visa lottery.

But if the occasional piece of rhetoric about defending American workers was enough, then Jim Webb would be the leading presidential candidate for President. As with Webb, despite the occasional show of promise, Sanders is MIA when it comes to taking a principled stand against mass immigration and amnesty for illegal aliens—thus rendering the rest of his “pro-worker” platform irrelevant.

Thus when it comes to opposing immigration in general, Sanders receives a career “D” from Numbers USA. He also receives the lowest possible rating for consistently voting against any measures that would reduce illegal immigration at the border. He even voted against making English the official language of the United States in 2007 [United States Senate Roll Call Vote 198 110th Congress, 1st Session, United States Senate, June 6, 2007].

In 2013, despite criticizing “a massive effort to attract cheap labor,” Sanders voted in support of the 2013 Amnesty/Immigration Surge [Senate roll vote for immigration bill, Fox News, June 27, 2013]. During the debate surrounding so-called comprehensive immigration reform, Sanders supported the DREAM act and a “pathway to citizenship” (aka Amnesty) for illegals.

Most importantly, despite his general critique of corporations’ refusing to raise wages and hire Americans, Sanders supported immigrant workers for the dairy industry in his own state. (See Family Dairy Farms: Killed by Illegal Immigration by Patrick Cleburne.)His explanation: “Here in Vermont, while I wish it were the case that kids would go into dairy, they do not” [‘This is a massive effort to attract cheap labor.’ Why Sen. Bernie Sanders is skeptical of guest workers, by Dylan Matthews, Washington Post, May 25, 2013].

Still, Sanders, 73, is perceived as out of step with the multiculturalism-dominated Democratic Party of 2015. Sanders once argued, “You should not be basing your politics based on your color” and even talked about the importance of helping “White, working class people” [Sen. Bernie Sanders on how Democrats lost White voters, by Steve Inskeep, NPR, November 19, 2014].

Because of Sanders’s traditional focus on economic populism rather than La Raza ethnic chauvinism, Luis Gutierrez sneered, “I don’t know if he likes immigrants because he doesn’t seem to talk about immigrants” [House Dem: I’m not sure Bernie Sanders likes immigrants, by Jonathan Easley, The Hill, June 11, 2015]. Sanders was also attacked for initially not featuring immigration in his stump speech, in contrast to “Democratic rivals Hillary Clinton and Martin O’Malley [who] have aggressively tackled the issue” [Bernie Sanders and Immigration? It’s complicated, by Seung Min Kim, Politico, June 19, 2015].

Of course, this kind of rhetoric may tempt some economic progressives who oppose immigration (they do exist) to support Sanders, despite his overall record, trusting him to put populism over identity politics. But the Vermont Senator has proven quite willing to surrender his principles to his ambition in the past, and he’s doing it again when it comes to seeking the nomination of a Democratic Party now defined by anti-white animus rather than any coherent economic program [Bernie Sanders is in with the enemy, some old allies say, by David Fahrenthold, Washington Post, July 25, 2015].

In a speech before the National Association of Latino Elected and Appointed Officials on June 19, Sanders claimed it was time to “end the discussion” about restricting immigration and deporting illegals and boasted he would build upon Barack Obama’s unilateral Amnesty/Immigration Surge [Bernie Sanders: Illegal immigrants ‘reviled by many for political gain,’ by Ariel Cohen, Washington Examiner, June 19, 2015].

Sanders has also repeated the usual clichés about bringing illegals “out of the shadows,” called for a path to citizenship for illegals and demanded the “Republican majority in both the House and the Senate needs to let us debate and pass real immigration reform” [Where Bernie Sanders disappoints liberals, by Dan Merica, CNN, June 22, 2015].

But even as Sanders moved to guard his left flank on immigration, he was tripped up again by black protesters at the recent leftist Netroots Nation conference who interrupted his speech, leading to Sanders shouting them down. Significantly, after being accused of “talking down” to the activists who screamed at him, Sanders has begun incorporating their rhetoric, working “black lives matter” into his speeches and campaign propaganda [Netroots disruption energizes black activists, by Maya Park and Daniel Strauss, Politico, July 25, 2015].

Sanders is also campaigning on the apparently urgent need for America to “apologize” for slavery.

However, despite all of this, Sanders is still losing non-white voters to Hillary Clinton by more than 55 points in a recent poll and has been characterized by both progressives and conservative critics as the candidate of affluent white liberals [Bernie Sanders makes direct appeal to black voters, by Alex Seitz-Wald, MSNBC, July 26, 2015].

And no matter what Sanders does or says, he remains a Senator from one of the whitest states in the union—leading even some of his supporters to say he will have a problem “relating” to blacks [Can Bernie Sanders Be Less White? By Barrett Holmes Pitner, Daily Beast, July 22, 2015].

The ultimate problem: Bernie Sanders’s vision of socially liberal Scandinavian style democratic socialism only seems to work in countries with Scandinavian style demographics (at least before countries like Sweden decided to abolish themselves with Third World immigration). In multicultural societies, as the late Lee Kuan Yew warned, people vote in accordance with race and religion rather than economic interests.

But this doesn’t mean Sanders is sunk. In contrast, it makes him a greater threat in the short term. As he continues to surge in the polls, Sanders may come to represent a more coherent form of “racial socialism” than even Barack Obama has represented, as he can promise an (unworkable) socialism that will undertake somehow deliver all things to all people.

And it’s important to note the GOP Establishment has in some sense created Sanders, just as it has created Trump. If Sanders can build a political coalition behind the racial grievances of blacks and Hispanics and tap into White discomfort about income inequality, he could prove a huge threat to a GOP Establishment seemingly determined to fit the progressive caricature of Republicans as plutocratic cronies. It’s no coincidence Bernie Sanders began to be taken seriously after his crusade against the Trans-Pacific Partnership, which the Republican leadership passed by siding with President Obama against the conservative base [The TPP Must Be Defeated, by Sen. Bernie Sanders, Huffington Post, May 21, 2015].

Of course, the Republicans have an easy counter to all of this. The competing demands within Sanders’s political coalition are irreconcilable, His candidacy would be highly vulnerable to an enthusiastic pursuit of the white vote. The GOP in its implicit GAP mode could campaign against mass immigration and talk about its impact on wages, push back on multicultural extremism and stand for law and order, and paint Sanders as a flip-flopping champagne socialist more interested in appealing to fringe Leftist activists than helping American workers and families. Sanders’s record of hypocrisy when it comes to American workers would make him highly vulnerable to even a minimally competent campaign.

But if the GOP takes the white vote for granted, and if Hillary blows the Democratic nomination, that could open the door for the victory of an outright Socialist. It would be a catastrophe for the historic American nation and something patriots need to start worrying about.

Because if there is one thing the Republicans know how to do, it’s seize defeat from the jaws of victory.