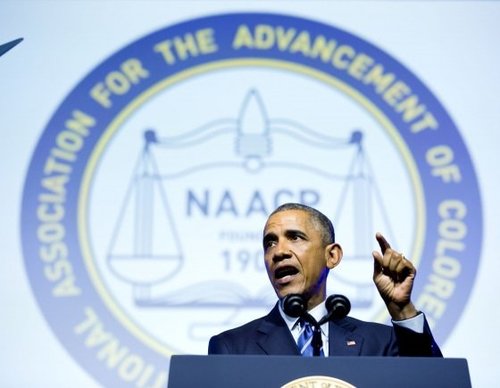 See earlier by Thomas O. Meehan: Obama’s Clemency Initiative—Putting Black And Hispanic Drug Distributors Back On The Streets Just In Time For The Riots

President Obama is commuting the sentences of drug dealers again, calling it part of a criminal justice “reform” package he outlined in a speech before the NAACP’s national conference on July 14, 2015.[Text | Video ] He wants Americans to believe that he is righting historic wrongs, and he’s particularly concerned with what he believes are disproportionate sentences meted out to 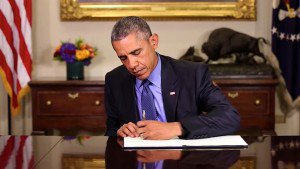 non-white drug dealers. Obama also frets about job prospects for the criminals he wants to liberate—it seems that racist white employers are loath to hire criminals. And he calls our incarceration rate “a source of inequity that has ripple effects on families and on communities and ultimately on our nation,” as if non-white criminals spring from intact families within functional communities that mesh seamlessly with the rest of our nation. [President Obama for the prisoners, The Economist, July 16, 2015]. What are his true motives and mentality?

On July 15, the president commuted the sentences of 46 inmates. It’s no surprise, given the president’s preoccupation with his own race, that 78 percent of them are black. Surprisingly, only four percent are Hispanic. Even more surprising: Only three are women. Does Michelle know this?

Back on March 31, Obama commuted the sentences of twenty-two inmates. Seventy-two percent of these were black. And again, only four percent were Hispanic. Only one woman got lucky that time.

It seems that white drug pushers, unlike black drug pushers, deserved their long sentences. Their commutations never get above single digits.

A revealing stat in the commutation records: the mean age of the perps. Using Inmate Locater, I was able to find the age of each prisoner in the commutations and determine the mean of each group. For the first group, the mean was 47 years old. It’s 49 for the second. (See a similar analysis from the leftwing Clemency Report website: Mostly black, mostly crack, July 16, 2015)

The president would say these prisoners were released at this relatively advanced age because they had been in prison too long for justice’s sake. But as a former law enforcement official, I can offer a more pressing and honest reason: Middle-aged and older inmates have reached the point where they are less dangerous, while starting to exhibit expensive medical issues, issues the Bureau of Prisons would rather not deal with.

What I detect in all these commutations: cynical mummery. I have little doubt that Obama would like to soften the effect of our justice system on all those “brothers” he doesn’t really know. He really does hope to divert his people from prison to a new system of treatment centers, drug courts, and halfway houses.

These will not work any better in the future than they do now, but they may be his legacy. In order to show his sincerity and to keep his Leftist fans happy, he is willing to put on this show. He gets to spring some soul brothers; the prison system gets to unload some old cons; and his fan boys and girls get to see themselves as part of his revolution.

Let’s look at a brief list of Obama’s other proposals as outlined in his speech to the NAACP.

President Obama also wants more drug programs and job training. But job training is a colossal failure and nothing will change that. Besides, the inmates get all the drugs they want in jail. How long would it be before Obama himself would be back on weed if he were stuck in the clink?

Surely Obama jests about job training. The only jobs most career criminals can hope to fill are in things like warehousing and landscaping. But those jobs are already filled by Latin American illegals, another component of Obama’s Coalition of the Fringes.

In order to fully integrate all those inmates sprung under Obama’s reforms, they need to hide their criminal records. That is, unless they want to work for Obama’s government. Then, we can’t be too careful.

And lest you are tempted to vote against these policies, Obama also wants to make sure felons can vote so they can cancel out your input.

All of this should be put in the context of in the larger deterioration of the rule of law created by President Obama’s refusal to enforce immigration law.

Remember, all the long-serving inmates he is rescuing were sentenced according to fully ratified law. If they are indeed victims, why not change the laws and sentencing guidelines for everyone instead of randomly freeing a few? Instead, Obama prefers to act the African Big Man and just do it himself, curious behavior for an alleged constitutional law scholar.

Obama has commuted more sentences than any president since Lyndon B. Johnson. But he also has some Republican supporters. Could it be some of these Republicans are connected with the private prison/community treatment industry? Can some be more interested in budget squeezing than public safety? I doubt that many of the released inmates will be moving into the same neighborhoods as the GOP lobbyists. I presume also that the Koch Brothers have plenty of security.

It’s clear that we have an alliance of the worst of both the amoral libertarian Masters of the Universe, and the subversive, racially aggrieved Left. They all get a prize in Obama’s reform bag.

The Left doesn’t even try to hide its desire to swell the ranks of welfare state via “reform.” It not only wants ex-inmates to legally hide their status from employers, but it wants them to vote as well.

The President of the United States is supposed to be the chief magistrate. Instead, he sounds like a public defender, explaining away criminality as simply a “mistake.”

What is entirely missing from this debate is the moral dimension. President Obama is full of empathy for the criminals. He seems to have none for their victims. But then, just as he saw his hypothetical son in Trayvon Martin, he sees himself in his fellow blacks that he’s freeing from prison. He just doesn’t see the historic American nation as part of his responsibility at all.