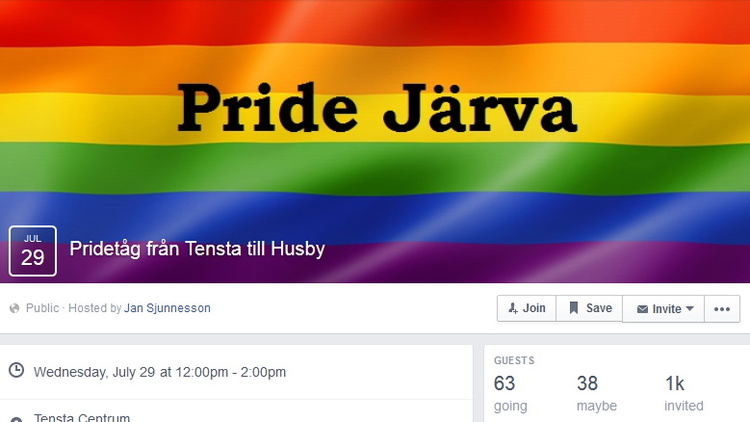 The Coalition of the Fringes is having trouble keeping it all together.

On July 29, a gay pride parade is scheduled in Sweden.  But, you see, this is no ordinary gay pride parade.  This gay pride parade was created by Jan Sjunnesson, former editor-in-chief for the Samtiden newspaper in Sweden, which is owned by the nationalist Sweden Democrats party (for our Canadian readers, think of the Sweden Democrats as being kind of like the Conservatives orthe Canadian Action Party, which means that they’re considered “extreme far-right” in Sweden). The parade is scheduled to go through Tensta and Husby – two areas where Muslim immigrants are more than 75% of the population.

On the event’s Facebook page, the organizers state that there will be public “kissing” and “singing”.

The Facebook page is absolutely filled with angry comments from leftists, attacking the “xenophobic right-wing nationalists” for organizing a gay pride parade through Muslim areas. Since Islam holds that gays should be executed, something like this is obviously an attack on Muslims and should therefore be outlawed. At least, that’s what Swedish leftists – and, indeed, Swedish gays – are saying.

RFSL, for those who don’t know, is a taxpayer-funded gay rights group (one of the oldest gay rights groups in the world, established in 1950), and they have publicly attacked this gay pride parade through Muslim areas as a display of racism and white privilege.

Many leftists are also calling for the parade to be legally banned, and for the people who organized it to be arrested for “hate speech” against Muslims.

But thinking through to the logical conclusion of all this, why, precisely, are leftists angry? As more Muslim immigrants are imported into Sweden, the society will become less socially liberal. As demographics change, eventually, homosexual rights will be rolled back.

They may be assuming that Islamic immigrants will eventually abandon their religion and become good little post-modern, deracinated consumers. But the process seems to be working in the opposite direction. After all, Sweden's expert on "Islamophobia," a native Swedish convert, eventually left the country to fight for the Islamic State.

What this shows is that the Left doesn't really believe anything it says about defending homosexuals or women's rights. It simply cares about undermining the traditional cultures of the West. And once those are destroyed, anti-Swedish and anti-Western leftists don't seem to care about what kind of a society will come next.