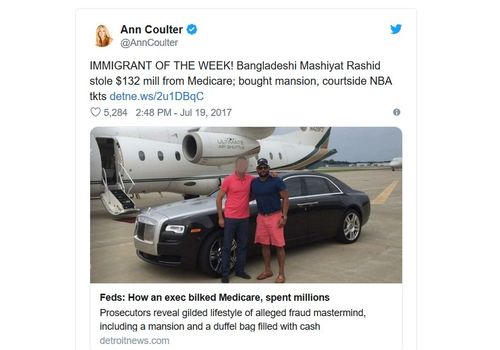 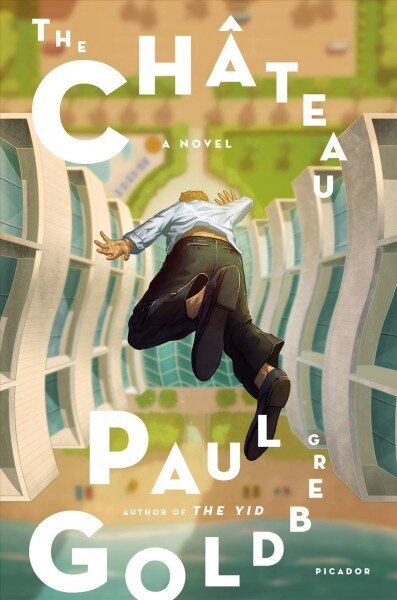 About $60 billion in “improper payments” due to fraud, waste and abuse are made annually in the Medicare program.[Medicare Funds Totaling $60 Billion Improperly Paid, Report Finds,  By Jim Avila, Serena Marshall and Gitika Kaul, ABC, July 23, 2015] Medicaid has its own similarly huge amount of “improper payments”. And all that money is simply “abandoned property” available for the taking, according to a character in the recently-published comic novel, about Russian Jewish immigrants: The Chateau by Paul Goldberg. Seems about right: Medicare fraud is dominated by immigrants, mostly Soviet Jews, but some Muslims and Africans. Even the few Anglo names, when investigated, invariably prove to be Third Worlders

Goldberg’s character puts it like this: as a surefire path to advancement for immigrants from the former Soviet Union

[F]raud is always the answer, and Medicare the target of choice. Medicaid too can be lucrative. Being litigious works. Medical malpractice and employment discrimination suits are fine…How can a smart man not accept things that—like Gogol had it—swim into your hands?

The Main Stream Media seems to regard this type of crime as somehow “natural”, barely worth noticing and, if reported at all, certainly without too much detail about exactly who is involved.

Thus, USA Today can report on a federal takedown by the late lamented Jeff Sessions’ Justice Department of Medicare and Medicaid scams that totaled $1.3 billion in stolen funds—and resulted in thousands of lives damaged or lost due to opioid abuse—without providing the name of a single perpetrator! [Jeff Sessions: 400 medical professionals charged in largest health care fraud takedown, by Kevin Johnson, July 13, 2017]

In fact, very few major media outlets named names in the coverage of the massive 2017 Medicare/Medicaid fraud investigation. And if an individual was mentioned, it was as close as possible to being a Tom Wolfe-type Great White Defendant—thus the New York Times named a man named Eric Snyder, but not Asif Uddin Alap Shah, or  Alexandria Suhanov.. [U.S. Charges 412, Including Doctors, in $1.3 Billion Health Fraud, By Rebecca R. Ruiz, July 13, 2017]

The reporting wasn’t always so muzzled.

The last time the New York Times reported in detail on Medicaid and Medicare fraud with anything like a realistic context was in 2012. Then it said frankly that “immigrants from the former Soviet Union have often dominated such schemes in the city.“ It continued:

Brighton Beach has one of the highest rates of health care fraud in the nation, according to federal statistics. In fact, an analysis of data from the Centers for Medicare and Medicaid Services, the federal agency that regulates those two programs, shows that more health care providers in the Brighton Beach ZIP code are currently barred from the programs for malfeasance than in almost any other ZIP code in the United States.

(The ZIP code with the highest level of medical fraud is in southern Florida, setting of The Chateau and a popular retirement spot for Brighton Beach residents).

But even the 2012 New York Times article was Politically Correct in that it failed to note that most of what it called the “Russian-speaking immigrant population” in Brighton Beach are Soviet Jews—a direct result of U.S. refugee policy. Still, at least it provided names.

CNN in its coverage of a 2016 crackdown did not name defendants but listed the areas where this type of fraud is most likely to flourish: California, Illinois, New York, Texas, Michigan and Florida. No surprise here for VDARE.com readers. [Hundreds arrested for $900 million worth of health care fraud, By Joshua Berlinger, CNN, June 23, 2016]

Yes, I know it might not be practical to list the hundreds of names involved, but journalists usually explain broad criminal schemes by profiling the actions of a typical criminal—you know, the “human interest” angle. Or maybe just give the names of individuals whose theft exceeds a certain threshold, say $30 million or so.

Never anything like that with the Medicare/Medicaid fraud story.

I decided to explore press releases since 2012 in one of the fraud hotspots noted in the CNN, the U.S. Attorney’s Office, Southern District of New York.

Here are names pulled from a search of press releases about Medicare/Medicaid fraud from 2013 to 2018 on the DOJ Southern District of New York website:

Except for growing ever larger, not much has changed in health care fraud since the Times’ 2012 story. Only the reporting has changed.

Consider, while combing through court records related to the media’s obsession du jour reporters would have stumbled across a cast of characters stealing hundreds millions of dollars from US taxpayers. What more could an investigative reporter want?

Especially given the incredibly light sentences for millions stolen in white collar crime, the certainty of fraud-caused opioid deaths, even the shameless use of the homeless(!) to further the fraud. One “light sentence” example: Haitian-educated “Long Island” Dr Ewald J. Antoine was sentenced to a year and a day for his role in  the  thirty million dollar scheme above. [Doctor Sentenced For Participating In $30 Million Scheme To Defraud Medicare And Medicaid, DOJ Press Release, August 21, 2018]

A Russian source tells me recent busts have been so significant they affected the supply of black-market American opioids in Moscow. But, alas, not even a Russian connection could interest our detectives hot on the hunt for how much Paul Manafort paid for a dress shirt.

In fact, of course, the truth is well-known to the MSM. It just downplays, filters, slants or ignores them in its self-appointed role as inter-tribal peacekeeper.

However, as often happens, the local upstate New York media apparently didn’t get the memo about the news filter. Thus a fraudulent medical ambulette operation that provided “taxi service,” reimbursed by Medicaid, in Adirondacks hamlets and in places associated with the French and Indian War and the American Revolution, such as Ticonderoga and Port Henry, was busted in May 2018. The names of the operators were all over the local media [UPDATED: Twelve face charges in Medicaid cab fraud case, by Don Lehman, PostStar.com, May 23, 2018] and in the Hearst Media paper The Albany Times Union. [Adirondack cab companies defrauded Medicaid of millions, IG says, By Bethany Bump, May 23, 2018]

A final note about  names—readers will wonder if a Dr. (to give a random immigrant name) Jahangir is actually an immigrant, or a second-generation American, raised in the Midwest. Since MSM sources never give this information, the answer is to search for their name on medical websites. When you find that they graduated from Ameer-ud-Din Medical College in Lahore, that shows that they’re an immigrant.

Mark Antonov [email him] has experience from the inside of refugee resettlement as a professional translator.