A couple years ago I wrote that immigrants are overrepresented among poachers because many cultures do not value species protection: Diversity Is Strength! It's Also Poaching.

(In contrast, American hunters and fishermen are some of our best conservationists because they want their sports to continue.)

Russians are known to fancy sturgeon, and fish eggs of the species (aka caviar) can bring a poacher $150-200/jar on the black market (particularly among immigrants), and a whole fish can be worth $2000 to $4000. Unsurprisingly, Russian immigrants have brought a penchant for poaching sturgeon to northern California, and several criminal rings have been arrested since at least 2005.

The latest arrest was of seven Russian men residing in the Sacramento area who were taken into custody April 10 in Colusa County for poaching. (Around 75,000 to 100,000 recent immigrants from the former Soviet Union live in the area.)

Those arrested used juvenile salmon as bait for sturgeon and sold the illegal catches for profit, the state Department of Fish and Game said in a prepared statement. Most of the fish were taken from the Sacramento River in Colusa County, according to the department. [Wardens reel in poaching suspects, Marysville Appeal-Democrat, April 11, 2009]

Sturgeon were quite plentiful in northern California a century ago, but now have been fished to dangerously low numbers.

The fish were sold illegally in Sacramento County, Laughlin said. "Sturgeon are on the verge of being listed as a protected species by the federal government," Laughlin said. "The commercialization of wildlife could lead to the end of sturgeon in my lifetime, unless people like this are stopped."

Sadly, California has only one game warden for each 198,000 residents, the lowest proportion in the United States, so the bad guys have a big advantage. Congratulations to the hard-working Fish and Game officers for catching these thieves who are thought to have been taking sturgeon for years.

The arrested men's mug shots are below. 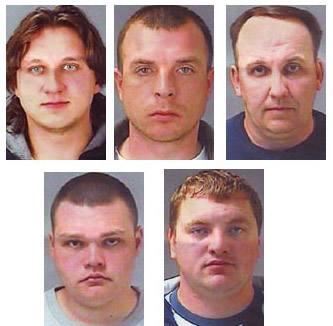