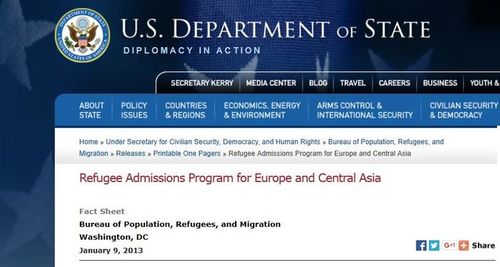 We are confidently told that religious tests have never been used in determining who gets into America and therefore America must take in any Muslim not currently wearing a suicide bomb vest. Or something.

But a reader points out the U.S. State Department’s Religious Minorities refugee program under the Lautenberg Amendment.

Since 1975, the U.S. has resettled over 900,000 refugees from Europe and Central Asia. Approximately two-thirds of this number came from the countries of the former Soviet Union, and the balance from other parts of Europe. Since 1989, the U.S. has admitted more than 440,000 refugees processed according to standards of the Lautenberg Amendment, which applies to members of specified religious minorities (Jews, Evangelicals, and certain members of the Ukrainian Catholic or Ukrainian Orthodox Churches) from the countries of the former Soviet Union. In FY 2012, the U.S. admitted 1,129 refugees from 11 countries in Europe and Central Asia, including those under the Lautenberg Amendment in-country processing program.

This is the program most akin to what should be done for Syrian “refugees,” if there are any. The Iranian Religious Minorities Program allowed only those who were just that, religious minorities (non-Muslims) to come to the US through the program. Most of those who benefited were Armenian Christians, Assyrian/Chaldean Christian, Jews, Zoroastrians, Bahais. … and only … two or three actual Persian Moslems who took advantage of it, and they were married to minorities.

There are a couple of interesting angles to this.

The second is that most domestic rhetoric these days is about protecting minority rights rather than about benefiting the majority under utilitarian greatest good for the greatest numbers rhetoric. The not very controversial Lautenberg Amendment extends that pro-minority bias to refugee programs. Obama could have called for making the refugees he wants to bring in from Syria be religious minorities, who, after all, are now often being violently persecuted by the Sunni Muslim majority. But instead Obama has made clear he rejects focusing on minorities from Syria and wants the majority of the beneficiaries to be from the majority on the grounds that to help Christians and the like would be discrimination.

After all there are 1.6 billion Muslims (or whatever) and we better not make them sore at us!

If you are looking for an Occam’s Razor explanation for this seemingly contradictory reasoning, well, it’s just Who? Whom?