Why Are Woke Leftists So Ugly?

Above: Steve Sailer has been pointing out for years how Democrats are driven crazy by Mitt and Ann Romney’s annual Christmas card featuring all their handsome grandchildren: those Republicans are trying to breed their way to victory. The Romneys, though not as conservative as us, look like the best type of American.

Let’s face facts: Compared to conservatives, Leftists aren’t very good-looking, at least when you control for socioeconomic status. This is nowhere more obvious than when it comes to two very famous “First Daughters.” The difference between Ivanka Trump—even if she has had some work done—and Chelsea Clinton is striking.

This difference is also obvious if you compare those who attended pro-life and pro-choice rallies after Roe v. Wade was overturned. Exceptions notwithstanding, conservative men and women are better looking. Conservative men are also more muscular and taller.

British evolutionary psychologist and (possibly unwitting) comedian Prof. Edward Dutton spoke about it at length on his YouTube channel, The Jolly Heretic, which promotes itself as an online English “pub.”

Dutton, who has written many times for VDARE.com, began Goblins: Why Are Extreme Leftists Often So Hideously Unattractive? by dressing as a goblin while pretending to be a not-very-easy-on-the-eye) leader of “Hope Not Hate.”

This organization seems to be the British equivalent of the Anti-Defamation League or Southern Poverty Law Center, but  has lost much credibility after being  exposed in a sting operation by British right-wing activist Tommy Robinson. One of the Hope Not Hate activists in Dutton’s thumbnail, Matthew Collins, really does resemble a goblin. 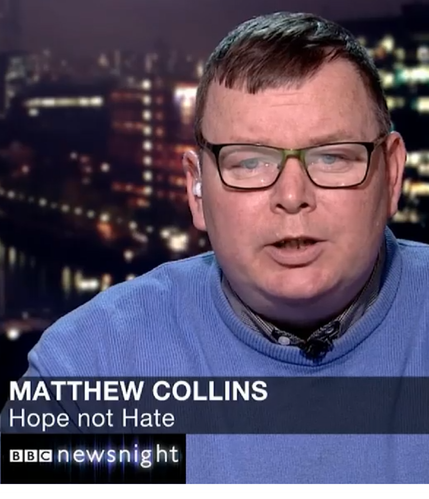 He is strikingly ugly.

But then we get to the meat of it: Dutton’s video sets out the growing body of academic studies that prove that Rightists are objectively better-looking—in terms of facial symmetry and other traits regarded as attractive—than Leftists. It’s something we kind of all know, but it’s amazing to see it so clearly proved.

Another study published the same year looked at Rightist and Leftist politicians in the United States, the United Kingdom, and Australia and found that “politicians on the right look more beautiful” [The Right Look: Conservative Politicians Look Better and Voters Reward It, by Niclas Berggren, Henrik Jordahl, and Panu Poutvaara, Journal of Public Economics, February 2017].

And voters, perhaps unconsciously, know this. The authors say they “use beauty as a cue for conservatism in low-information elections.” In other words, they assume that the more attractive candidate is more likely to be conservative.

But conservatives aren’t just better-looking. Another study from 2017, this time in Evolution and Human Behavior, found that conservative men not only have more attractive and manly faces than leftist men, but also more muscular bodies [Is sociopolitical egalitarianism related to bodily and facial formidability in men?, by  Michael E. Price, Jennifer Sheehy-Skeffington, James Sidnaius, and Nicholas Pound, September 2017]. Put simply, in the terms of the Chad-Virgin Twitter meme, conservative men are “Chads”; Leftist men are “Virgins” [The Virgin vs Chad meme, explained, Daily Dot, November 7, 2017].

Unsurprisingly, conservative men are also taller than Leftist men. A study based on a large sample and published in the British Journal of Political Science reported that “taller individuals are more likely to support the Conservative Party, support conservative policies and vote Conservative; a one-inch increase in height increases support for Conservatives by 0.6 per cent” [Height, Income and Voting, by Raj Arunachalam and Sara Watson, October 2018].

To understand this relationship, Dutton presents a number of related findings. Conservatives have better mental health than Leftists. But the direction of causation, a study published just last month showed, is the opposite of what we might expect. Becoming a conservative, and doing “conservative” things like going to church or being involved in civic life, does not make people significantly more mentally healthy. Rather, people who already have good mental health are more likely to be conservative—implying that the mechanism is strongly genetic [A Longitudinal Test of the Conservative-Liberal Well-Being Gap, Salvador Vargas Salfate, Sammyh S. Khan, James H. Liu, and Homero Gil de Zúñiga, Personality and Social Psychology Bulletin, July 7, 2022].

Additionally Dutton presents research, also published in Personality and Social Psychology, implying that we are instinctively conservative; conservatism, in other words, is our evolutionary norm [Low-Effort Thoughts Promote Political Conservatism by Christian S. Crandall, Jeffrey A. Goodman, and John C. Blanchar, March 16, 2012]. We become more conservative when we act impulsively, when we are stressed and when we are drunk, meaning that our inhibitions are down.

Taking all of this together, Dutton presents his theory to explain why conservatives are more attractive than Leftists, which is also set out in his new book, Spiteful Mutants: Evolution, Sexuality, Religion, and Politics in the 21st Century.

Drawing on the Moral Foundations model of Jonathan Haidt, he argues that we have five moral foundations, reflecting the fact that we are pack animals competing for status within the pack’s hierarchy.

The group-binding foundations are Obedience to Authority, In-group Loyalty and Sanctity vs. Disgust, the latter playing a significant part in wanting to repel outsiders. The “Individualizing” foundations are “Equality”—if you bring everyone down to your level then you get proportionately more—and “Harm Avoidance,” which also avoids harm to you.

Dutton argues that the evolutionary “norm” is, therefore, conservatism. Until the Industrial Revolution, we were under “harsh Darwinian selection” and the child mortality rate was about 50%. We were also under group selection; the more group-oriented tended to triumph. With the collapse of child mortality to 1 percent, we saw the rise of genetically sick people who would have died as infants under harsher conditions.

In that about 84 percent of genes relate to brain functioning, the brain is a massive target for mutation. So, if you have “mutant genes of the body”—leading to a poor immune system—you will certainly have them in the mind.

He further argues that mutation of the mind tends toward Leftism, as we were previously so strongly evolved to conservatism, and it seems to be mediated by mental illness, which strongly predicts Leftism, possibly because it involves strongly negative feelings, such as jealousy and paranoia.

Thus, Leftists desire power over everyone else and deeply hate those they see as powerful. Or maybe depression makes Leftists unhappy. They cope with this by telling themselves that they’re morally superior to everyone else, turning them into Narcissistic Woke campaigners.

So, there you have it. Woke people, science shows, are as ugly as we thought they were. And a key reason is that, both mentally and physically, they are mutants who wouldn’t have survived infancy without the scientific breakthroughs of the Industrial Revolution.

They are ugly, inside and out.