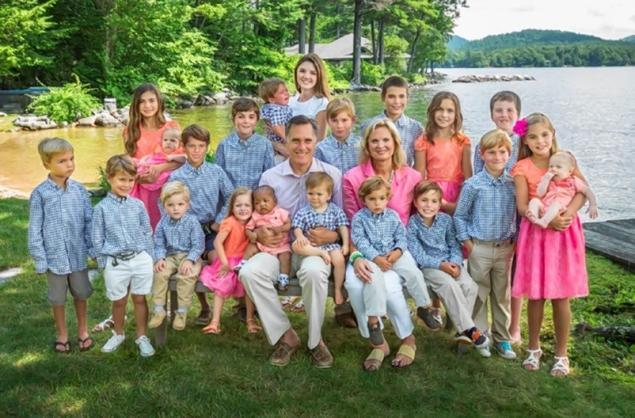 I pointed out years ago that Democrats are driven crazy by Mitt and Ann Romney's annual Christmas card featuring all their grandchildren: those Republicans are trying to breed their way to victory. Don't those Aryan crypto-Nazis know that the only legitimate way to win elections is to import foreigners illegally to vote for you?

Now, one of the five Romney sons has adopted a black child. So, when a half-black talking head on MSNBC named Melissa Harris-Perry invited a claque of minor comedians to fill some dead air by making fun of the latest Romney Christmas card, conservatives went nuts in response since there's now a black individual in the Romney family picture for them to defend, allowing them to accuse Harris-Perry of "racism."

Glenn Beck, in contrast, defended Harris-Perry sensibly, saying, "She apologizes, for what? It was a break with comedians."

More generally, interracial and international adoption is a fraught topic since it exposes obvious flaws in the group giving up their children.

The classic example is South Korea, which was a poor country with little altruism for non-family members. The typical pattern is that nice white people in America find out about a country or culture that doesn't do a good job of taking care of its orphans and they start adopting that culture's unwanted children and giving them good homes. Eventually, the donor country starts to become ashamed by the fact that the American adopters are better people than they are, and decides to get its house in order and do a better job of taking care of its own orphans.

Being human, the ashamed donor culture lashes out at the evil Americans who are taking their unwanted rejects into their own homes and raising them in an atmosphere of love. But, hopefully, the chastened donor culture gets its act together and does better by its own orphans.

That seems to be going on right now with Russia, for example. After an era of dissolution, the Russians are now ashamed and incensed that they let two perverts in the West adopt a Russian child in 2005 for use in their sick games, and so they are turning against foreign adoptions and have banned gay adoptions altogether

(This Russian ban on homosexuals adopting of course is one of the talking points for the Washington-Wall Street axis that wants to stir up a World War G with Russia. For example, Glenn Beck is jumping on the bandwagon of having a new Cold War, this time over gays:

A lot of money was made off the last Cold War. A new one waged against "Hetero-Fascism" sounds like a real geyser of cash for the well-positioned.)

Anyway, part of the Black Pride movement of the 1960s-early 1970s was opposition to whites adopting African-American babies. But this healthy emotional reaction ran into the reality that blacks weren't really ready to go to all the trouble of taking care of all black babies, so this attempt at a ban on interracial adoption fell apart. But that won't stop black people from feeling embarrassed and thus angry at nice white people like the Romney son who adopt a black child.