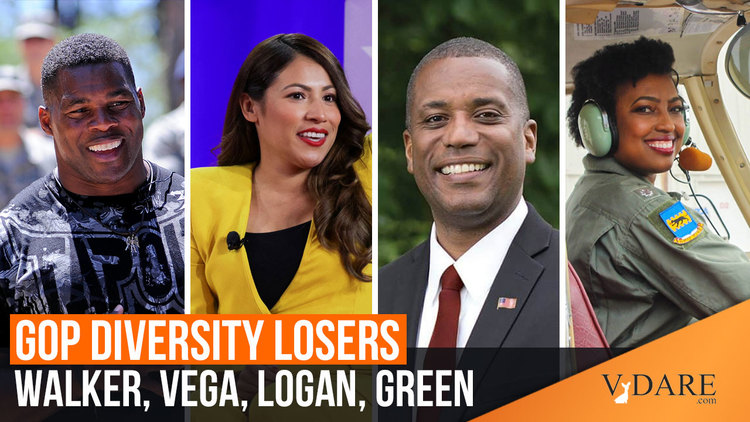 The results of the 2022 midterms hang in the balance, but a few things are clear. The GOP proudly touted minority outreach and all its non-white candidates, but this diversity push didn’t pay off. Many of the non-white candidates favored by GOP consultants (cf. U.K.) lost winnable races, and the GOP’s modestly higher minority support (probably not due to these candidates anyway) didn’t translate to victory. Diversity isn’t a strength for either the GOP or America.

The GOP earned rare praise from the leftist Mainstream Media for its diversity push this year. By the party’s own estimate, it fielded at least 67 non-white candidates for House races. The New York Times said this put the party on the “path to diversity” [Dozens of Candidates of Color Give House Republicans a Path to Diversity, by Jonathan Weisman, New York Times, October 11, 2022]. Jason Riley, the Wall Street Journal’s Professional black conservative, predicted that a more diverse GOP was a “nightmare scenario” for Democrats [The GOP’s 2022 Midterm Slate Is More Diverse Than Ever, October 25, 2022]. Just a few days before the election, lady GOP strategerist Sarah Chamberlain warned that the diverse slate of candidates was “bad news for Democrats” [Most diverse slate of Republican candidates is bad news for Democrats come November, Fox News, November 2, 2022].

Republican hopes of huge Latino gains realized in Florida but less evident around the country so far https://t.co/I92OKqqGSf

The GOP didn’t just run a host of non-white candidates. It also invested heavily in minority outreach this cycle. The party spent millions on Outreach Centers in black, Asian, and Hispanic communities that provided an array of services, including assistance to help immigrants naturalize so they could vote. Assisting future Democrats to naturalize is a pretty stupid idea, but then again, we’re talking about the Stupid Party here. “We’re having a permanent presence and having a permanent conversation in Spanish, in English, about the values that the Republican Party brings, which are very much in line to the values that generally you hear from Hispanics,” Georgia Republican official John King said earlier this year [Republicans have invested millions in nonwhite voter outreach ahead of the midterms, by Stephen Fowler, NPR, August 31, 2022].

My latest for @NPR: After making gains in 2020 among voters of color, the @GOP has invested in expanding minority outreach centers in places like Georgia and Pennsylvania, committing to year-round organizing led by local nonwhite conservatives. #gapolhttps://t.co/N2cgUP0Mjr

Maybe King, Riley, and Chamberlain should have a “permanent conversation” with white voters to find out what they want.

The GOP did have some success with minorities last Tuesday. Republicans earned record high support among Hispanics at 39 percent. But numbers elsewhere didn’t really improve. An NBC poll found that Republicans did slightly worse among Asians this year (32 percent versus 34 in 2020) [Asian Americans favored Democratic candidates in midterms, exit polls say, by Kimmy Yam, November 10, 2022]. Greater Hispanic support only seemed to translate into wins in Florida, where the party made significant inroads in historically Democrat areas in South Florida, but not elsewhere [GOP hopes of huge Latino gains realized in Florida but less evident around the country so far, by Eric Bradner, CNN, November 9, 2022].

It may make sense to run Hispanics in Hispanic plurality areas. But Republicans also ran non-whites in white districts with mediocre results. Four non-white candidates did worse than any hypothetical white candidate.

Despite these setbacks, Walker still forced a runoff against Democratic incumbent Raphael Warnock. But he ran well behind Brian Kemp in the gubernatorial race. An Establishment squish hated by Trump, Kemp still decisively beat Stacey Abrams by 8 points.

The Georgia GOP Establishment could’ve run any white candidate—whether David Perdue or Doug Collins—and easily won the Senate race. Now it goes to a runoff, where Walker’s chances are uncertain.

A sheriff’s deputy and district supervisor in Prince William County, Vega was the Republican nominee in Virginia’s 7th congressional district. She heavily touted her “Latina” heritage, despite the white majority district being only 9 percent Hispanic. Vega received a large boost from the conservative movement through an appearance at CPAC and praise from conservative media due to her race [Virginia’s Yesli Vega boosts national profile with CPAC appearance, by Meagan Flynn, Washington Post, August 5, 2022]. She emphasized her support for a no-exceptions abortion ban, presumably federal, in a blue-leaning district filled with white moderates. The district was thought to be a likely Republican pickup, but incumbent Abigail Spanberger won reelection by more than 4 points.

Logan was the black Republican nominee for Connecticut’s 5th district (previously home to VDARE.com Editor Peter Brimelow). It’s the lone district in the blue state that Republicans could have won because it barely leans Democrat. The district is more than 70 percent white and only 6.5 percent black. Yet the only choices in the district were two black candidates. Logan lost a nailbiter to incumbent Jahan James. Perhaps if Republicans had picked someone who looked more like the district, they could have won.

Green was the black Republican nominee for Indiana’s 1st district, a highly prized possible pick up. Green received praise from conservative media because she’s a black veteran [Jennifer-Ruth Green’s Surprising Flight Plan to Win in a Democratic District, by Adam Wren, Politico, October 7, 2022]. The district is represented by a white Democrat, Frank Mrvan, and is more than 70 percent white, but it does have a sizable black population of just under 20 percent. The area leans D+3. But despite the national backing, Green lost by more than 5 points.

Now, some non-white candidates were solid and/or won their races. John James, who has run for U.S. Senate in Michigan twice before, was elected in Michigan’s 10th congressional district. The area is 88 percent white but only barely leans Republican. The black Republican won by an extremely narrow margin over his Democratic opponent. James is not a solid immigration patriot by VDARE.com’s standards, but it is fair to note his victory.

John Gibbs, on the other hand, is a certified immigration patriot. The black Republican ran in Michigan 3, which is solidly Democratic because of redistricting. He lost his race due to the newly redrawn borders. It was previously represented by Never Trumper Peter Meijer, whom Gibbs defeated in the GOP primary. If the 3rd had remained solid red, Gibbs would’ve probably won [John Gibbs: New Third District leans left, but it’s not unwinnable, by Doug Reardon, Fox 17, October 26, 2022].

One of the bright spots for Republicans from Tuesday: pick-ups in New York. But with the exception of one Hispanic Republican who won his race, the state party ran white candidates against tough Democratic challengers. Three of the white Republicans won and added seats to the Republican congressional caucus [Republicans pick up 3 New York House seats with Long Island sweep and defeat of DCCC chair, by Joseph Spector, Politico, November 9, 2022].

More proof that white voters call the shots: Ron DeSantis’ shellacking of Charlie Crist in Florida. DeSantis pulled 65 percent of the white vote: 72 percent of white men and 58 percent of white women. Compare those totals to 2018 when he barely squeaked by Andrew Gillum. In other words, mobilizing the white base—what VDARE.com calls “the Sailer Strategy”—still rules.

It would be far better if the GOP saved its money on offering naturalization courses to immigrants and focused on white suburbanites. It would also be a smart idea to run competent whites to represent whites rather than fielding clowns like Herschel Walker.

A more diverse GOP isn’t the path to victory. A GOP that gets more of the white vote is the only way forward.