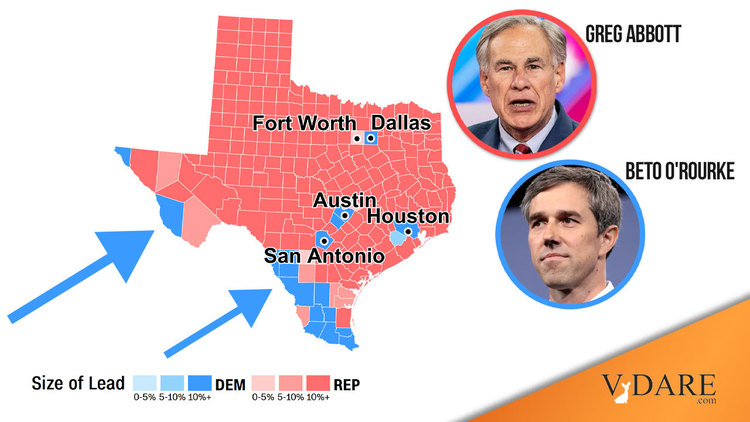 So Much For The Hispanic Vote In The Rio Grande Valley

I hear that in person, both Democrats Henry Cuellar and Vicente Gonzalez are nice people. Then too, no less a source than Tucker Carlson has said that Joseph Biden is nice in a one on one setting. However, I never cared to vote for politicians based on how nice they are.  We shouldn't be picking our CEOs, our sports team coaches, or our politicians based on how nice they are. If they are going to be good, they will be angering one athlete or another, one employee or another, one part of the electorate or another. Politics shouldn't be a popularity contest based on personality.

With Henry Cuellar in particular, I've had friends who have met him in person and intended to vote for him. Come election time, Cuellar pays lip service to border enforcement. However, he has a solid F- rating from NumbersUSA. I did see Cuellar on Fox News claiming that he was going to advance a bill to hire more Border Patrol Agents. I question what good that will do.

I remember talking to a retiring BP Agent on the northern border. He told me that his station caught more illegal aliens when the station had three Agents than when it had twenty. Of course, the Agents were allowed to do "farm and ranch" check back then, and they would go sack up French Canadians at logging camps and illegal Mexicans harvesting blueberries. It was a change in policy that caused the decrease. Hiring more Border Patrol Agents to do diaper duty is not going to stop the invasion. A change in policy is what is necessary, and, judging from Cuellar's voting record, he doesn't want the policy to change.

Vicente Gonzalez also has an F- rating from NumbersUSA. He defeated conservative media darling Mayra Flores. Mayra Flores is the immigrant from Mexico who married a Border Patrol Agent. Funnily enough, I've worked with Border Patrol Agents who grew up in Mexico and migrated to the United States, then joined the Border Patrol. Many of them were useless in the field, but some were very good hardworking Agents too. It might seem surprising to some up north that an immigrant from Mexico would be more hardline against illegal immigration than a native born American (certainly than any Democrat), but down in the Valley, it's not that unusual. Of course, she wouldn't be as against immigration as a conservative white Republican. After all, she did immigrate to the United States, and she would never have been for an immigration moratorium, which is what the country really needs.

So, in defiance of the Sailer Strategy, the GOP dumped a bunch of money into south Texas in the hopes of picking up three Republican seats. They got one, Monica De La Cruz. ("Now don't be sad, because one out of three ain't bad?" Is that how the song goes?) [ GOP makes history in South Texas congressional race, despite other losses, by Monica Madden, ValleyCentral, November 10, 2022]

And as Ann Coulter pointed out, Beto O’Rourke crushed Abbott in the actual Border districts:

One wonders what would have happened if the Republican party had dumped more money into competitive races up north between white candidates that were close.

I guess the establishment Republicans proved to themselves that they weren't racist and, to them, that's far more important. I prefer the J.D. Vance tactic of confronting the racism charge head on.