Sailer In NEW YORK Magazine: Reporting, But No Links—Read Sailer's Book For More

I've looked at this article in New York magazine, and the first thing that strikes me is that while it has a few links to people who've quoted Steve Sailer,  it has no links to anything he's written on either VDARE.com,  Unz.com, or anywhere else. See Steve Sailer's post below for more links.

However, the authors do get the basic point:

After Mitt Romney’s 2012 loss to Barack Obama, the Republican establishment undertook a rigorous postmortem and, looking at demographic trends in the United States, determined that appealing to Hispanics was now a nuclear-level priority. And yet their successful candidate in the next election won by doing precisely the opposite. The Trump strategy looked an awful lot like the Sailer Strategy: the divisive but influential idea that the GOP could run up the electoral score by winning over working-class whites on issues like immigration, first proposed by the conservative writer Steve Sailer in 2000, and summarily rejected by establishment Republicans at the time. Now, 17 years and four presidential cycles later, Sailer, once made a pariah by mainstream conservatives, has quietly become one of the most influential thinkers on the American right.

The Man Who Invented Identity Politics for the New Right, By Park MacDougald and Jason Willick, April 30, 2017 (Emphasis added.)

While the Sailer Strategy was invented by Steve Sailer, it was first described as such by VDARE.com editor Peter Brimelow. On November 9, 2016 Sailer wrote:

Here’s part of a VDARE column I wrote in November 2000, during the Florida Recount, with the germ of what Peter Brimelow took to calling the Sailer Strategy: 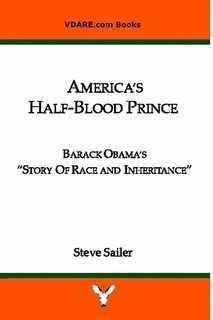 That, by the way, is the link New York should have put in on "first proposed by the conservative writer Steve Sailer in 2000," but didn't.

The Sailer Strategy was vindicated in a positive way by Trump riding it to victory, but also vindicated in a negative way by John McCain and Mitt Romney riding its opposite to defeat. (As MacDougald  and Willick say, above, the GOP leadership wanted to do it again, nominating Jeb Bush, who thought illegal immigration was "an act of love.")

In both those elections, the GOP tried to convince groups that have never voted for them and that represent small minorities of the American electorate to change their votes, while refusing to ask for the votes of whites-because that was racist. And they did this when the candidate was a minority who was running against white America on what Steve called a "Coalition of the Fringes".

As proof, by the way, that "Identity Politics" was not invented by wicked white people, you should consider reading Steve Sailer's 2008 Obama book America's Half-Blood Prince available when you donate to VDARE.com.