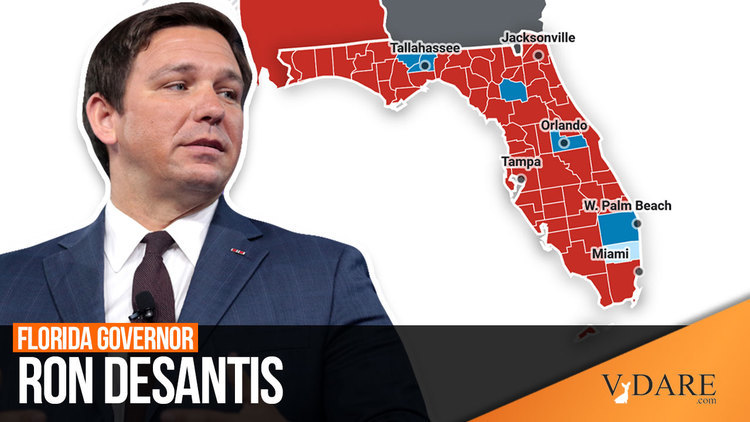 I think a lot about a speech I gave at the Berkeley Springs Castle back in April of this year, at the first VDARE Conference. I asked those in attendance if they could recall the number of votes Ron DeSantis had defeated Andrew Gillum by in 2018.

For those wondering, DeSantis won by less than 33,000 votes. It was an incredibly close victory in 2018 over a black candidate who many thought would be presidential timber for the Democrats (cut down by rumors of homosexual infidelity being true).

Coming off an incredible victory in the 2022 Florida gubernatorial race, it’s vital to point out the difference in DeSantis’ razor thin 2018 victory and his dominating performance this year: the white vote.

In 2018, whites represented 66 percent of the electorate in Florida. DeSantis received:

In 2022, where DeSantis beat his Democrat opponent 59%-40%, the importance of winning the white vote and its correlation to this landslide victory couldn’t be clearer. Whites represent 64% of the electorate in 2022:

In a white majority state and nation, increase the white share of the vote, and win an election by a landslide (instead of barely beating a closeted homosexual black degenerate the media had anointed as Presidential stock).

We call it the Sailer Strategy. Simply put: It’s how to save the Historic American Nation, and it’s the reason DeSantis dominated in 2022.