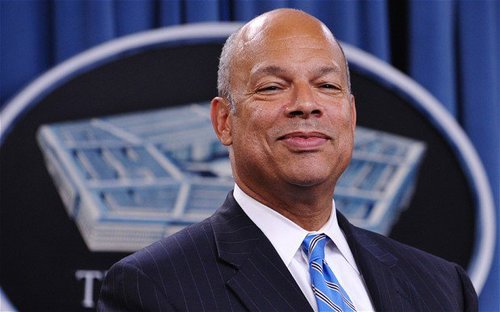 The American public and Capitol Hill politicians should have been more vigilant about vetting Obama's vetters in the first place. What do you expect when you put crony know-nothings, political hacks and identity politics zealots in charge of our safety?

In case you'd forgotten (or never paid attention), Obama campaign finance bundler Jeh Johnson snagged the top DHS post two years ago thanks to Harry Reid's rigging of Senate filibuster rules. Johnson's a "diversity" relic from the Clinton era with zero experience in border security, port security, airport security or immigration enforcement. So what is his main qualification for overseeing the $40 billion, 240,000-employee homeland security bureaucracy? Besides dumping gobs of money into Obama's coffers, he's the "first African-American" to hold the job, as the White House trumpeted.

In case you'd forgotten (or never paid attention), DHS undersecretary Alejandro Mayorkas, the No. 2 in charge of the department, was also a beneficiary of Reid's lowered nomination standards. Like Johnson, Mayorkas was an Obama bundler early and often. He slithered into the job in 2013 while still under investigation by the DHS inspector general for his role in facilitating EB-5 foreign investor visa scams over the vehement objections of homeland security staff.

As my co-author John Miano and I point out in our new book, "Sold Out," on systemic visa corruption, federal investigators interviewed more than 15 whistleblowers ranging from rank-and-file employees to several senior managers in California and at the D.C. headquarters who accused Mayorkas of bestowing both preferential access and preferential treatment to politically connected EB-5 applicants and stakeholders. They detailed how Mayorkas "created special processes and revised existing policies in the EB-5 program to accommodate specific parties" while serving as director of the U.S. Citizenship and Immigration Services.

"Their allegations were unequivocal," the inspector general concluded, and the corruption under Mayorkas was systemic.

That's right. A zealous advocate of sanctuary city policies, Fong now oversees outreach to nearly 18,000 state, local, tribal and territorial law enforcement agencies nationwide. This enforcement obstructionist is in charge of terrorism prevention policies and coordination and distribution of intelligence between DHS and localities. Her main qualifications? Being the first woman and Asian-American to lead the SFPD, whose rank-and-file despised her.

In case you'd forgotten (or never paid attention), Assistant Secretary for International Affairs and Chief Diplomatic Office Alan Bersin was implicated in a scheme to manipulate the DHS hiring process to try and secure jobs for at least three political cronies who worked with Bersin on the Obama 2008 campaign, according to the Office of Special Counsel. Two of those pals did not even meet "the minimum qualification requirements for their respective career positions," OSC's complaint noted, because they lacked at least one year of relevant experience.

Bersin moved up the DHS ladder; a lower-level scapegoat was exonerated in court; and a key figure in the patronage plot was allowed to retire.

As the Washington Times reported, Marrone "admitted in court to collecting a taxpayer salary while supervising the senator's private home renovations, hiring a private eye to dig up dirt on a political rival and serving as president of a company that used nonprofit urban revitalization money for a for-profit venture." At trial, Marrone acknowledged doing Fumo's rotten bidding because "that was the culture at the office ... there were no boundaries."

Marrone walked away after claiming he was a victim. And now, this go-along, get-along toady willing to violate the law to please a boss serves as Johnson's right-hand man and the No. 3 official at DHS.

These hacks won't even vet each other. They place "optics," "diversity" and political protectionism above national security. Forget the red flags over San Bernardino. It's the giant white flag of surrender waving over DHS that's the real threat to our well-being.