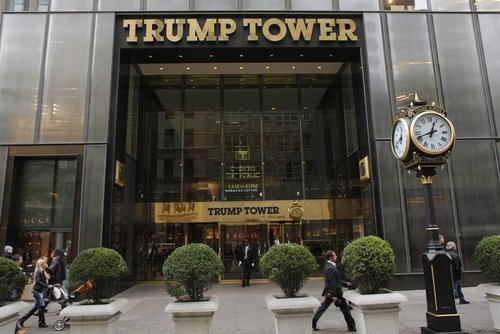 Elites To Trump: Nice Little Business You Got Here, Shame if Something Were to Happen to It

Real estate companies, furniture makers and other businesses that have emblazoned the Trump name on their properties and products ought to think hard about whether they want to be associated with the outrageous things coming out of Donald Trump’s mouth as he campaigns for the Republican nomination for president.

Some businesses like NBC, Serta and Macy’s wisely distanced themselves from Mr. Trump and said that they would discontinue products that bear his name after he called Mexicans criminals and rapists earlier this year

… That’s why one Dubai-based retail company quickly removed Trump merchandise from its stores after Mr. Trump said Muslims should be barred from coming to the United States until officials “figure out what is going on.”

… His licensees should ask themselves if they want to be linked to a brand that carries those connotations.

In contrast, the New York Times brand is linked to its financial savior and largest individual stockholder, the Mexican oligarch Carlos Slim who has risen to be one of the richest men in the world by using his ill-gotten monopoly, bought cheap from the murderous Salinas regime, to rip off Mexicans. The recent revelations that the Slim dynasty has strong ties to literal Fascism with a capital F, ties that he has never publicly repudiated, only adds to the connotations.
[Comment at Unz.com]