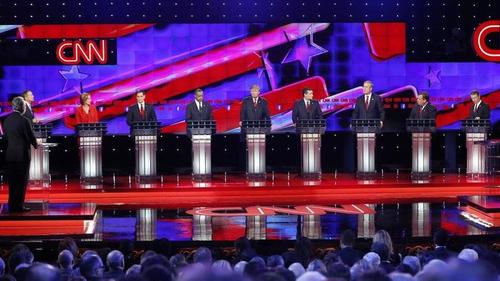 Ann Coulter: It’s Time For The Other 13 Candidates To Drop Out

At what point in Donald Trump's inaugural address do you figure the GOP Establishment will finally will grasp what's been happening?

The Establishment—not "elites," because they're mostly bland functionaries who went to third-rate schools—have thrown absolutely everything they have at Trump. I've never seen so many Republicans featured on MSNBC.

At least no one will be able to say the Republican National Committee didn't give it the old college try (and, again, that would be third-rate colleges).

Trump is a runaway hit with Americans for the simple reason that he's the only candidate saying anything Americans care about.

The other candidates responded by attacking him viciously. Now, the eunuchs are duking it out over who has the most aggressive approach to ... fighting ISIS!

Asked why he called Trump's proposal "unhinged," Jeb! explained: "Well, first of all, we need to destroy ISIS in the caliphate."

Marco Rubio said: "The problem is we had an attack in San Bernardino," adding that "what's important to do is we must deal frontally with this threat of radical Islamists, especially from ISIS."

Ted Cruz said: "We need a president who understands the first obligation of the commander in chief is to keep America safe. If I am elected president ... we will utterly destroy ISIS." [Transcript]

Why are Republicans talking about starting a war in Syria to stop Muslim immigrants from killing Americans in America? Is it our job to straighten out Syria? Can't our government just stop bringing the terrorists here? If Rubio thinks he knows how to govern Syria, he's free to run for president there. (Except he'd have to stop talking about his dad the bartender because Muslims don't drink.)

Republicans love pointing out that all the gun restrictions proposed by Democrats after every mass shooting would have done absolutely nothing to stop that particular mass shooting.

But the GOP's demand that we take out ISIS would also have done nothing to prevent the San Bernardino attack. As we know from Jim Comey, the director of the FBI: Syed Farook and Tashfeen Malik were planning a terrorist attack against Americans before ISIS existed.

It's as if there's a law of toughness conservation: The weaker a candidate is on protecting our borders, the more aggressively he talks about bombing foreign countries, a move known as "the Lindsey Graham."

The GOP's conservation of toughness has led them to such macho positions on Syria that even our feckless commander in chief is able to checkmate them.

Here's an idea: We let backward, poverty-stricken, misogynistic, clitorectomy-performing Third Worlders scratch out a living in their medieval hellholes, and just keep them out of our country. Also known as: the Trump Plan.

Except the fun parts when Trump was speaking, the candidates talked about almost nothing else at the debate but carpet-bombing the Middle East, taking out this leader or that group, sending American forces to train Sunni Arabs, touting the Kurds, announcing their specific strategies for defeating ISIS, giving perfect little answers about our nuclear throw-weights and the "nuclear triad" and correctly identifying the "good guys" and "bad guys"—all of whom live 7,000 miles away from us.

When do we get to talk about Americans?

"In my opinion, we've spent $4 trillion trying to topple various people that frankly, if they were there and if we could've spent that $4 trillion in the United States to fix our roads, our bridges, and all of the other problems; our airports and all of the other problems we've had, we would've been a lot better off. I can tell you that right now ..."

The nice thing about having your own helicopter is you can see the terrain below. The rest of them keep bumping into one another, as if they're 9-year-olds trying to out-precocious one another on knowing unimportant military terminology and the pronunciation of foreign names.

As we learned from Spelling Bee champ Rubio, the "nuclear triad" refers to the fact that we have nukes on (1) the ground, (2) airplanes and (3) submarines.

Wow, isn't that fascinating? Having learned it, I now have to excise it from my brain, as Sherlock Holmes would, as useless knowledge.

Did FDR know how to change the oil on a landing craft vehicle?

These debates have turned Republicans into self-parodies of wonkery over common sense. Without Trump in the debate, the entire audience would have been asleep in 30 minutes.

At this point, the most important question facing the Republican Party is: When Trump's the only one with the poll numbers to make the main stage at the next debate, what should he do? Card tricks? Juggle? Sing "Danny Boy"?