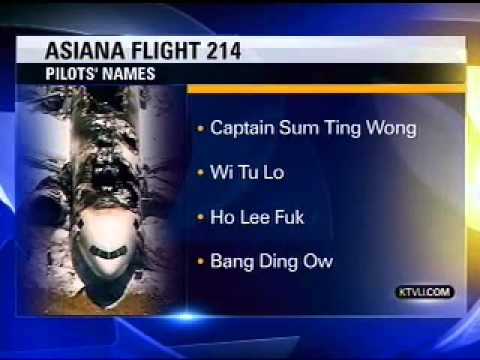 Over at Taki's, David Cole laments that people who suspected something wasn't right with the San Bernardino shooters didn't report them because they were afraid of being called racist.

An interesting aside in the piece is that the same fear ended with those fake Chinese names being broadcast after Asiana 214 went down in San Francisco.

Remember back in 2013, when Asiana Airlines Flight 214 crashed on final approach in San Francisco? Only two people died, which meant we all felt comfortable having a good laugh when TV station KTVU in San Francisco was duped by a prankster into announcing the “names” of the airplane’s pilots: “Sum Ting Wong,” “Wi Tu Lo,” “Ho Lee Fuk,” and “Bang Ding Ow.” The on-air gaffe made for a great viral video, followed by a hearty mea culpa from the station. Pundits around the world wondered how the fake names ever made it to air, considering the fact that, as local newspapers reported at the time, as many as five people had to check and approve the names, and another person had to type them into the teleprompter. Plus, a random person at the NTSB confirmed the names when the station called before airtime. No one up the chain became suspicious? Really?

About a year after the incident, I met a young lady who was working at KTVU at the time of the crash. She told me that the general consensus among her coworkers was that those who approved the names did become suspicious, but no one wanted to take the risk of being the first to speak up. KTVU has many Asian employees, and most of the people involved in approving the names were white. No one wanted to look “racist” for suggesting that the names were fake…just in case they were wrong.

Asian Employee: Oh, what, they’re not “right” because they’re Asian? Not everyone in the world is named Bob Smith.

Asian Employee: Chinese names are a joke to you? That’s my culture you’re laughing at. White Employee: But “Ho Li Fuk” sounds like…

Asian Employee: Hey, Mr. White Privilege, sorry that a nation of a billion people doesn’t choose its names based on how they sound in English. Your language isn’t the only one in the world, you know. I’m not going to stand by while my culture is marginalized and disrespected.

And then the next day, the white employee finds himself called into HR:

HR: We’re letting you go. We can’t allow one of our employees to call Asian people a joke and make fun of their ancient culture. Today’s workforce has no place for racism in any form, period. You’re a white supremacist, and you should be ashamed of yourself. Free your mind! Heal your hate! As Maya Angelou once said to Jimmy Carter while enjoying Keemun tea with the Dalai Lama… [The lecture then continues for 90 minutes.]

Three producers were fired because of the prank names, and a fourth one “left for health reasons.” But they were fired for ineptitude, not racism. Given the choice, back when the staff members were deciding whether or not to voice their concerns about the names, they each apparently decided, individually, that they’d rather take the chance of being fired for incompetence instead of racism. In today’s America, you can survive the former, but the latter means the end, period, no appeals, no future prospects.

So the fear of left-wing terror led to a major gaffe on a news story about a fatal crash. No one could ask a simple question for fear of being called "racist."

What other questions aren't being asked. Oh, maybe this one.

Ho Lee Fuk. Sounds to me like Sum Ting Wong.