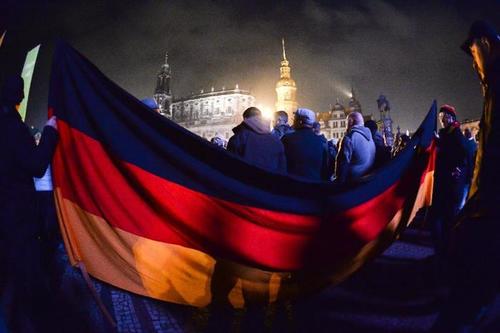 It's not enough that German politicians are telling their constituents they need to be replaced by Muslims. Now, the ostensibly German media is actively encouraging the abolition of free speech and government action against people who disagree with them.

As you can tell from the tone of the coverage below, even reporters outside Germany are salivating over the possibility of criminalizing dissent.

On Monday, prosecutors in the northern city of Hamburg said they were investigating a complaint against three Facebook managers alleging that they failed to act against racist comments posted by users...

Lawyer , who filed the complaint, told news site Spiegel Online that he had flagged more than 60 offending entries to Facebook Germany and claimed it "encourages the dissemination of offensive, punishable content through its actions".

Facebook representatives in mid-September met Maas and pledged to combat racist hate speech, encourage "counter-speech" and step up monitoring of anti-foreigner commentary from some of its 27 million users in Germany.

Something tells me we won't get a principled defense of free speech from Facebook.

The Main Stream Media sometimes lectures us about how they are a valuable check on government abuses. But in contemporary Western society, the MSM actually serves as the most fanatical branch of the repressive apparatus. The job of a modern reporter isn't to publish news or research facts. It's to hunt down dissent, protect the Narrative and guard those in power. Essentially, modern reporters publish lies and then try to imprison or economically destroy those who notice they are publishing lies.

Empowered by this media protection, the German government is now increasingly open about its desire to "dissolve the people and elect another."

Prominent German politicians spoke out against anti-migrant group PEGIDA on Tuesday, the day after the organization marked its first anniversary with a thousands-strong rally in the eastern city of Dresden.

"It is time to band together" against xenophobia, Justice Minister Heiko Maas said on German public television. Interior Minister Thomas de Maiziere, meanwhile, spoke of an "insufferable amount of hate towards refugees and politicians," who support them in a newspaper interview, seemingly a reference to the violent attack against pro-refugee mayoral candidate Henriette Reker in Cologne.

Sigmar Gabriel, Germany's deputy chancellor and leader of the Social Democrats (SPD), also condemned the presence of the "extended and verbally abusive arm of [right-wing parties] the AfD and NPD" on city streets.

PEGIDA supporters gathered in downtown Dresden on Monday night under banners carrying slogans such as "Merkel must go," and "Traitor to the people." Media estimates suggested that between 15,000 and 20,000 "Patriotic Europeans Against the Islamization of the West" (to translate the acronym PEGIDA) showed up to voice this disapproval of the government's reaction to the recent refugee crisis.

You have to love the clickbait language cheerleading a government "calling out" its own people.

Again, if this isn't occupation, what is?