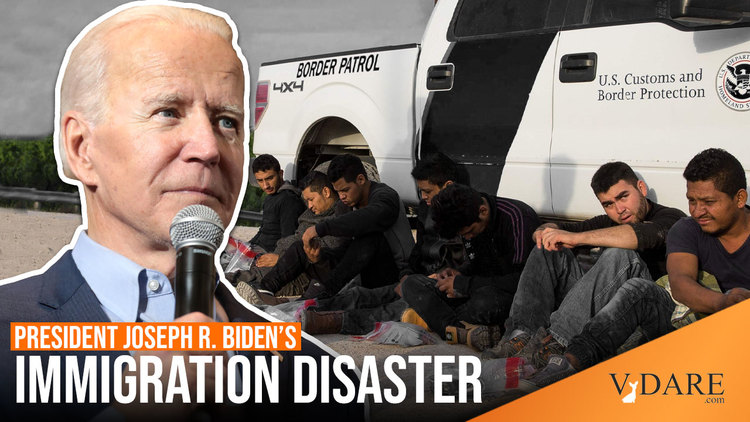 The Biden administration has just ended President Trump’s Migrant Protection Protocols, including the “Remain in Mexico” policy that kept questionable asylum seekers out of our country. Homeland Security chief Alejandro Mayorkas said it was no longer needed and interferes with the administration’s objectives [Termination of the Migrant Protection Protocols Program, DHS.gov, June 1, 2021]. Trump condemned the move with a statement that implicitly explained what it will do: hasten The Great Replacement and dispossess the Historic American Nation. In other words, immigration remains the issue facing the country. If Republicans want to win in 2022, they must campaign against Biden’s Open Borders.

“Remain in Mexico” was one of the highlights of Trump’s presidency. The Border Patrol was able to keep at least 68,000 illegal aliens out of the country, signaling that they can’t abuse our asylum system to gain a foot in the door. Now, thanks to Biden, they can gain that foothold once more [Biden administration officially ends Trump's 'remain in Mexico' asylum policy, by Dareh Gregorian, NBC News, June 1, 2021].

“I have determined that MPP does not adequately or sustainably enhance border management in such a way as to justify the program’s extensive operational burdens and other shortfalls,” Mayorkas wrote in the memo terminating the measure.

Mayorkas, a Cuban Jewish immigrant who was caught finagling visas for rich foreigners during his time in the Obama Administration, openly says immigration policy should benefit foreigners, not Americans:

In deciding whether to maintain, modify, or terminate MPP I have reflected on my own deeply held belief, which is shared throughout this Administration, that the United States is both a nation of laws and a nation of immigrants, committed to increasing access to justice and offering protection to people fleeing persecution and torture through an asylum system that reaches decisions in a fair and timely manner. To that end, the Department is currently considering ways to implement long-needed reforms to our asylum system that are designed to shorten the amount of time it takes for migrants, including those seeking asylum, to have their cases adjudicated.

Trump reacted brilliantly. “Their objective is to eliminate the U.S. border entirely and flood the country with so many illegal aliens that every community is overwhelmed,” POTUS 45 said “Joe Biden is the first American President who doesn’t want America to be a nation at all” [Trump blasts Biden for rescinding his ‘Remain in Mexico’ policy, by Mark Moore, New York Post, June 2, 2021].

That’s right. And terminating MPP is just one of Biden’s moves.

Thus he seems likely drop another key tool that keeps illegals out of the country. Left-wing activists want him to revoke Title 42, which empowers the Border Patrol to expel migrants on public-health grounds. Trump enacted it in March 2020 to keep out Wuhan Flu carriers. Now the administration that sows fear about the pandemic would simultaneously stop Border Agents from keeping out infected illegals [Pressure Amps Up on Biden to Rescind Title 42 Border Order, by Claire Hansen, US News, June 3, 2021].

These policy changes are come at a time when Biden weakly says illegals should stay home. As they reached record levels after his inauguration, Biden and his deputies have told the press “the border is closed.” But actions speak louder than words. Illegals continue to pour across the border, knowing Biden isn’t serious. Border arrests hit a high not seen in nearly 20 years in April, with border agents detaining more than 110,000 single adult migrants, including family units and unaccompanied minors, the total was nearly 180,000. Only 62.5 percent were deported.

Preliminary data for May show that border arrests increased yet again. And these only account for the ones they detain. It’s believed that as many as 1,000 illegals evade border agents every day.

As well, Immigration and Customs Enforcement arrests have fallen by more than half since Inauguration Day. The agency’s arrests in April are the lowest on record, and 2021 will likely be the first year in which ICE deports less than 100,000 aliens. Agents claim ICE is being slowly shut down in all but name [ICE Deportations Fell in April to Lowest Monthly Level on Record, by Nick Miroff, Washington Post, May 5, 2021].

This should be expected when high-ranking officials and members of Congress have said the agency should be abolished.

The Border Patrol is also feeling the pinch. Agents are so demoralized by Biden’s policies—such as demanding they no longer use the term “illegal alien”—that they’re retiring. Voluntary retirements are set to exceed 2020’s figure. Agents say Biden has turned the agency into the “Welcome Patrol” [How some border agents are struggling with Biden’s policy shift, by Ted Hesson et al., Reuters, May 14, 2021].

Illegal crossings have pushed American facilities and resources to a breaking point, but that  won’t move Biden to abandon a dramatic increase in refugees. The administration announced in April it would stick to Trump’s record-low refugee intake due to the border surge that had packed facilities once reserved for refugees. But a Leftist backlash forced Biden to reverse course and boost intake to 62,500. Biden also revoked Trump’s temporary immigration moratorium that protected vulnerable American jobs from the threat of cheap foreign labor.

The administration’s one grand idea for stemming illegal migration: increased foreign aid to Latin America. The data suggest that idea is worthless, and even liberals say the aid does nothing to resolve problems there and is prey to government corruption. Many Central American economies depend on illegals sending remittances. It’s doubtful Biden’s increased aid will compensate for that [Why Biden’s plan to slow migration through international aid is unlikely to succeed, by Nicholas R. Micinski, Washington Post, June 3, 2021].

The good news for Republicans is this: polls show that strong majorities oppose Biden’s border policies. An Associated Press in May poll found that 54 percent of those surveyed disapprove of them; only 43 percent approve. A Harvard-Harris poll showed that 80 percent consider the border a “crisis” and illegal immigration a serious issue [Voters unhappy with Biden handling of border crisis, polls reveal, by Anna Giaritelli, Washington Examiner, May 10, 2021]. A plurality of voters polled, 47 percent, oppose increasing refugee admissions [Biden’s Expansion of Refugee Admissions Is Unpopular With Bulk of Voters, by Cameron Easley, Morning Consult, May 12, 2021]. Even the media’s dubious Amnesty polls show Americans don’t want to reward illegal aliens [Biased Poll Shows Decreased Appetite for Amnesty, by Robert Law, Center for Immigration Studies, March 25, 2021].

Biden can’t hide from the results of his unhinged policies. The border will soon be back in the headlines.

In other words, Republicans have the perfect issue for the 2022 midterms. Trump summarized Biden’s agenda better than any other Republican could. This is what he implied between the lines about Biden’s dumping MPP and Remain in Mexico: the Democrats are trying to create bastardized nation that allows the whole world in—so long as they’re non-white. Biden’s immigration policy is a plan for national suicide, plain and simple.

Some Republicans get it. Indiana Rep. Jim Banks, chairman of the powerful Republican Study Committee, put out a sharp manifesto in March that called for the party to highlight immigration patriotism to make itself the workers’ party. Banks didn’t traffic in stale bromides about supporting legal immigration. He said, all immigration must be curtailed. The RSC has continued to encourage its members to focus on immigration and attack Biden’s Open Borders.

Georgia Rep. Marjorie Taylor Greene went on the offense in March. She proposed a complete immigration moratorium. Pushing that idea will push Democrats back on their heels and make them defend the never-ending supply of cheap labor against the interests of the American worker.

Trump, Banks, and Greene show the path forward for Republicans. But sadly, too many fixate on the imaginary socialist threat and join Biden’s anti-white blood libels. The party recently elevated notorious immigration booster Rep. Elise Stefanik to the third-highest ranked leader in the House caucus. Party leadership is not taking immigration seriously enough.

Immigration is an existential threat to America. And voters clearly oppose Biden’s Elect A New People agenda. They want an America First immigration policy—not one that places the interest of foreigners over those of the Historic American Nation.

Only Republicans would be stupid enough not to run on the issue next year. Let’s hope the Stupid Party doesn’t live up to its name yet again.