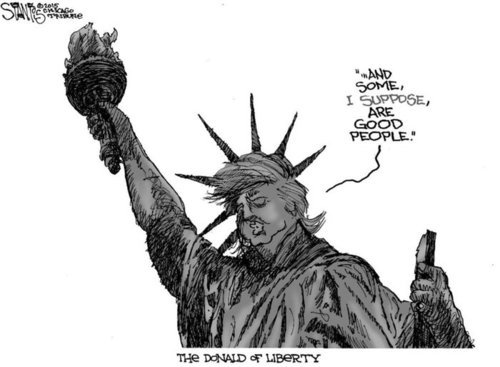 "The Donald Of Liberty"

Ann Corcoran, the indefatigable and astonishingly productive proprietress of Refugee Resettlement Watch, reached out to me Thursday night (July 30) to see if I could recommend a source that would rebut yet another invocation of the "huddled masses" trope.  This time it was being trotted out by one Will Servant, who was objecting to Ms. Corcoran's take on the conflict brewing in St. Cloud, Minnesota between citizens unhappy with their community's swamping by Third World "refugees" and the swamping forces.

In a response to her blog entry on these developments, Mr. Servant began:

Thanks Ann. You’ve given me enough half truths, innuendo, and opinion masquerading as truth, to last at least until Thanksgiving. I am saddened that there are people so dramatically opposed to what I consider to be righteous and Christian, the caring for the least of us. I am dismayed that there are those who think so incredibly different than I do that it is nearly impossible to even engage them in respectful dialogue. Here is a quote from the famous poem inscribed on a pedestal at the Statue of Liberty.

“Give me your tired, your poor,

The wretched refuse of your teeming shore.

Send these, the homeless, tempest-tost to me,

I lift my lamp beside the golden door!”

Well, it must be kismet!  That very morning, the following letter from me had appeared in my home-town paper, the Bozeman Daily Chronicle, written in response to the cartoon displayed at the top of this VDARE.com entry and with the newspaper-supplied title "Statue has nothing to do with immigration":

On Wednesday, July 15, the Chronicle published a cartoon that attempted to make some point about Donald Trump’s bid for the presidency. What that point actually might be wasn’t clear, but the connection to Trump was, as the cartoon featured part of a statement Trump had made about the character of illegal aliens from Mexico. And this partial statement was uttered by a familiar icon the cartoonist had labeled “The Donald of Liberty.” How clever! (Not really.)

The famous statue standing in New York harbor is frequently brought into conversations about immigration when people who know little about the subject weigh in. In fact, that statue’s actual title is “Liberty Enlightening the World,” and it has nothing to do with immigration. Zip. Zero. Nada.

To read in detail about this non-connection between the statue and immigration, find online an op-ed published July 5, 2009, in the Washington Post, “She Was Never About Those Huddled Masses.” Notably, the article’s author is Roberto Suro, a professor of communications at the University of Southern California, who’d been founding director of the Pew Hispanic Center.

In his piece, Suro recommends removing Emma Lazarus's “huddled masses” sonnet from the statue's pedestal. If well publicized, this would be a good start in spurring Americans—including cartoonists and editors—to think seriously about the nation-breaking subject of ceaseless mass immigration, instead of dealing in uninformed emotions and airy slogans.

All in all, the widespread confusion that recent cartoon in the Chronicle exemplifies is very strange. Imagine a hypothetical foreign country that was burdened with immigration problems explaining its policy this way: “We used to have sensible immigration laws, but then someone built this fool statue.” You'd think they were mad.

The Suro op-ed is available at this link.  For anyone who is a serious advocate of patriotic immigration reform (aka "immigration sanity"), it is a must read.  And it is very quotable.  So please go read it.  And then remember that it's there.

I will reemphasize a couple of points:

2. Suro was founding director of the Pew Hispanic Center.  The Pew HISPANIC Center.

Ann Corcoran used Suro's mythexploding suggestion in a subsequent entry at her site, Don’t let them use the Lady Liberty b.s. anymore! Remove the poem!

Suro's capsule history of the statue is superb, but if you'd like more detail, there's Elizabeth Koed's A SYMBOL TRANSFORMED: HOW 'LIBERTY ENLIGHTENING THE WORLD' BECAME 'THE MOTHER OF EXILES' [HTML, PDF] in the Spring, 1992 issue of The Social Contract quarterly.  (As best I can tell, Koed was a graduate student of history professor Otis Graham, one of the founders of the immigration-sanity cause.)

Back to my letter for one further point: Its closing paragraph is based upon something VDARE.com's editor James Fulford wrote in 2001.  So I kinda, sorta plagiarized his memorable words.  But I'm confident James doesn't mind: We have a civilization to save, and (at this point) powerful words are our main resource — so when there's no margin for attribution (as in a word-limited letter to a newspaper), just use 'em.

By the same token, if the seemingly-ineradicable brainfart falsely associating the statue with immigration pops up in your local paper, submit a letter-to-the-editor that will help educate other readers — and editors!! — on the facts.  When you do, feel free to use any verbiage from my letter above that will help in your effort: Plagiarize!