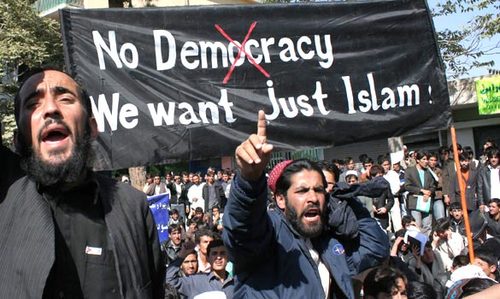 Poll of Muslims Residing in America: Yes to Sharia, No to Assimilation

It is a rare thing for a poll to ask the difficult questions of Islam people, so the recent effort from the Center for Security Policy is appreciated. The survey shows a supremacist group that has not come to join the American community, but to prevail over it. An observation of the late Lee Kuan Yew, the founder of modern Singapore, is appropriate: “I think we were progressing very nicely until the surge of Islam came. . . I would say today, we can integrate all religions and races except Islam.”

A majority of the Muslims polled thought they should be allowed to be governed by Islamic sharia law in this country. (So why didn’t they remain in Islamistan??) 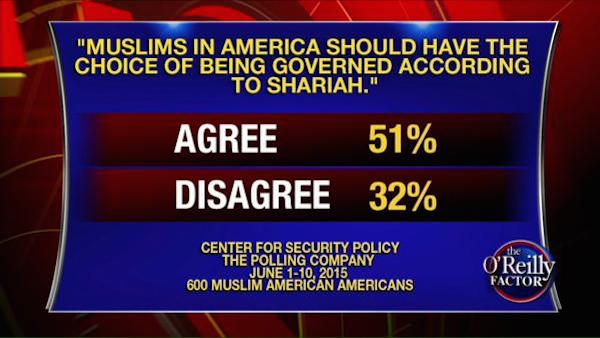 A substantial minority believe attacks on Americans are justified because that’s what jihad requires.

The results of the survey show the extreme folly of Washington continuing to admit Muslim immigrants. Not all are active headchoppers, but America used to recognize that welcoming declared enemies is not something a prudent nation should do. For example, Democrat President Franklin Roosevelt didn’t admit Germans or Japanese during WWII. And Osama bin Laden declared war on the US in 1996, a war that continues to this day.

Survey of Muslims Living in the United States June 2015

From June 1-10, 2015, The Polling Company, Inc. conducted a nationwide online survey of 600 Muslims living in the United States on behalf of the Center for Security Policy (CSP). The results, many of which are troubling, are presented below.

Overall, the survey suggests that a substantial number of Muslims living in the U.S. see the country very differently than does the rest of the population. Nearly one in ten of those Muslims polled accurately agree that the beliefs of Al Qaeda and Islamic State (also known as ISIS or ISIL) are correct and consistent with Islamic law (shariah).

Between a quarter and a third think that violence is called for when their faith is insulted, and that it is legitimate to attack Americans here in the U.S. as part of the Global Jihad. By contrast, in an earlier poll of the broader U.S. population, CSP found that a 63% majority of those surveyed said that “the freedom to engage in expression that offends Muslims or anybody else is guaranteed by the U.S. Constitution and cannot be restricted.”

Although a majority of Muslims living in the U.S. is not disposed to violence, a majority does embrace shariah and wants the American legal system – and Americans themselves – to approve and accommodate it. More than half (51%) of US Muslims polled believe either that they should have the choice of American or shariah courts, or that they should have their own tribunals to apply shariah. Only 39% of those polled said that Muslims in the U.S. should be subject to American courts. And a majority of those surveyed (51%) agreed that “Muslims in America should have the choice of being governed according to shariah.” When that question was put to the broader U.S. population, overwhelming majorities held that sharia should not displace the U.S. Constitution (86% to 2%), and that Muslims should be subject to the same courts as other citizens rather than have their own courts and tribunals here in the U.S. (92% to 2%).

There is a distinction between a pluralistic society that accepts and respects diverse religious and cultural traditions – and this. This is not about freedom to read the Qur’an in the street or have pork-free lunches in public schools. It is about our freedom to preserve our system of government and our lives under the laws derived from the Constitution.

Shariah is the fixed legal framework of Islam: it is not open to personal interpretation. Its immutability notwithstanding, however, shariah apparently is viewed by many U.S. Muslims as a rather malleable set of suggested lifestyle guidelines. This became evident in a series of separate questions, to which a plurality of respondents was most likely to answer that shariah is a guide to the “personal practice of Islam,” and that “it is up to the individual Muslim to define shariah.” That said, 11% of respondents said shariah is “The Muslim God Allah’s law that Muslims must follow and impose worldwide by Jihad”.

According to the Pew Research Center, the number of Muslims in the United States was 2.75 million in 2011, and growing at a rate of 80-90 thousand a year.i If those figures are correct and have remained consistent, the US would have approximately 3 million Muslims today. That would imply that over 300,000 Muslims living in the United States believe that shariah is “The Muslim God Allah’s law that Muslims must follow and impose worldwide by Jihad”.

Likely further reflecting a genuine ignorance of what is contained in the shariah code (and/or perhaps the Constitution itself), 60% of Muslims living in America say the U.S. Constitution and shariah are compatible. If the two conflict, however, fully one-third of U.S. Muslims polled (33%) would defer to shariah and only 43% would uphold the law of the land. Again, by that estimate, there are a million Muslims in the U.S. who believe that “If shariah conflicts with the U.S. Constitution and the Bill of Rights,” shariah should be considered supreme.

By contrast, a broader poll of Americans conducted last month found that voters are resolute that sharia should not displace the U.S. Constitution (86% to 2%), and that Muslims should be subject to the same courts as other citizens rather than have their own courts and tribunals (92% to 2%) here in the U.S.

Some 29% of those polled say that “violence against those that insult the prophet Muhammad, the Qur’an, or Islamic faith is sometimes acceptable.” Separately, 25% agree that “violence against Americans here in the U.S. can be justified as part of the global Jihad.” And 19% agreed that “the use of violence in the United States is justified in order to make shariah the law of the land.” That’s nearly three quarters of a million Muslims who believe that violence in the U.S. is justified – and nearly a million who accept violence against those who insult their faith.

These findings contrast sharply once again with views held by the broader US population. CSP’s earlier poll found that a 63% majority of the broader population said that “the freedom to engage in expression that offends Muslims or anybody else is guaranteed by the U.S. Constitution and cannot be restricted.”

Those surveyed were evenly split (41% apiece) as to whether jihad is an obligation of Islam, but far more certain that there are violent jihadists in the U.S. (54% yes; 15% no; 28% don’t know). Almost half are familiar with the Muslim Brotherhood, even as 44% are “unsure” if they are here in the U.S. and 40% say they “don’t know” which of three descriptions provided (non-violent, terrorist, non-terrorist jihadi) best describes them. Roughly one- quarter say the Muslim Brotherhood represents their own views or that its leaders are legitimate leaders of the Muslim community.

Finally, of U.S. Muslims surveyed, only one in ten considers the Islamic beliefs of ISIS (9%) and Al Qaeda (8%) to be an accurate reflection of shariah. This finding once again likely reflects the typical U.S. Muslim’s ignorance of shariah rather than any deliberate attempt to deceive. Again referring to Pew’s numbers, that would mean that only 250,000 out of some 3 million American Muslims believe that ISIS and al Qaeda’s “beliefs are correct and consistent with shariah.” An optimistic reading of such numbers might see in them an opportunity to educate the rest of U.S. Muslims on the tenets of their own faith.

IV. Conclusion: We Have a Problem

America is a nation of immigrants. But it is also a Republic – meaning a nation governed by consent of the governed under rule of man-made law.

The results of this survey suggest that too many U.S. Muslims do not see it that way. Americans may welcome and accept them, but this subgroup – as many as half – is unwilling to accept America’s legal system derived from the U.S. Constitution as its way of life.

The policy implications of these findings are stark: we already have allowed too many to enter this country as immigrants, refugees, or civilization jihad settlers whose true allegiance is to an alien legal system called shariah. As a nation, we must do more to screen those who enter to ensure they will accept American law as the Supreme Law of the Land, as the Constitution (and their oath of nationalization) require. The results of not doing so could be catastrophic for all of us.