Radio Derb Is On The Air: Uneasy Lies The Head That Wears The Crown (Especially In Jordan), Etc.

This week, while commenting on the situation in Jordan, I indulge myself in some late-20th-century news-junkie nostalgia:

Jordan’s a monarchy, current monarch King Abdullah. For news junkies of my generation, though, it’s Abdullah’s father we remember as emblematic of the country: King Hussein, who ruled Jordan through almost the entire second half of the last century. 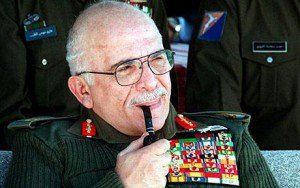 Hussein was a piece of work. He survived Allah knows how many assassination attempts, in one case at the controls of his own plane, flying evasive maneuvers to escape from Syrian jets trying to bring him down. He also survived losing a big chunk of his territory, the West Bank, in the 1967 War, and then defeated an insurrection by Palestinian refugees. The guy was indestructible until cancer got him. British journalists called him the PLK, the Plucky Little King, not altogether sarcastically. The “little” anyway is excusable: Hussein stood five foot three.