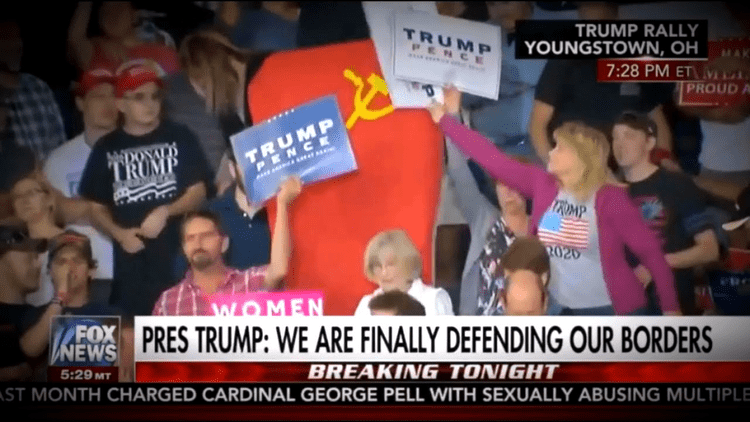 The "Red Flag" in this case represents a quasi-Communist regime stripping the rights away from the American citizen. For the President to support them is big mistake. When the media, politicians and your own family members refer to President Trump and all of his supporters as "Right Wing," "Extremists," "Racists," and "Nazis," what is stopping Aunt Janeen from calling in a tip to the FBI about her patriotic nephew Timmy who just happens to want to Build The Wall and Send Them Back? Surely normal every day patriotic Americans wouldn't be falsely labeled "Nazis"... Right?

We have a political climate where average supporters of the President of the United States of America are considered "extremists" simply for repeating the rhetoric of the President himself.

Every single Trump supporter has been labeled hateful, racist, bigot, Nazi, etc...by the Main Stream Media, politicians and around 50 million city-dwelling Americans who couldn't point to Arkansas on a map. These people have been whipped up into a frenzy over mythical "Nazis" in red Trump hats who are apparently more likely to attack at random than the average inner-city gang member.

These "Red Flag" laws circumvent due process. When the state comes for your weapons, they take them and then it is up to you to prove you are not guilty of whatever "hate speech" it is you are accused of. [Federal Gun Violence Restraining Order—The Most Dangerous Gun Control Bill in the History of the United States? by Robert Farago, The Truth About Guns, March 9, 2018]

Freedom of speech has become virtually non-existent in the United States where we have seen an acceleration of censorship on the internet with millions of voices silenced for simply expressing their First Amendment rights.

Now, we are watching our Second Amendment rights being ripped away from us with the full support of the Democrats, the GOP and even President Trump. [BREAKING: Trump Announces Support for Red Flag Laws, by Dan Zimmerman, The Truth About Guns, August 5, 2019]

Brazil of course has a murder rate comparable to the United States of America. After Brazil implemented harsh restrictions on gun ownership, their murder rate involving firearms went up and over half of the weapons used were illegally owned.

Switzerland, on the other hand, has about two million privately owned guns in a nation of 8.3 million people.

The country's overall murder rate is near zero.

The United States has had a high rate of gun ownership for hundreds of years, but only recently have we begun to see the phenomenon of "mass shooters". You can't blame video games because Switzerland has them too. So, what is it that makes our murder rate so similar to Brazil's but so different from Switzerland? It is certainly not the fact that we can legally own firearms!