Loretta Lynch And The Mulatto Mafia 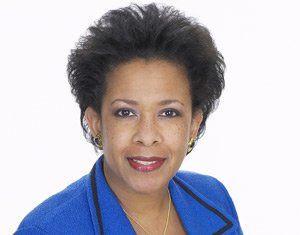 After Eric Holder announced last fall that he'd be stepping down from the post of U.S. Attorney General to rejoin His People, the President put forward the name of Loretta Lynch as a replacement. This week Ms Lynch has been up before the Senate Judiciary Committee for confirmation hearings.

Ms Lynch, currently U.S. Attorney in Brooklyn, is a sort of twofer version of Eric Holder: the same color as Holder but female. Her opinions on matters of federal law enforcement are of course identical to Holder's. Who but a person filled with hate would have any different opinions?

So, another Social Justice Warrior from the Ivy League affirmative action program.

The connection with Holder is in fact more than merely dermatological and spiritual: In 1980 at Harvard, Ms Lynch co-founded the Xi Tau Chapter of Delta Sigma Theta Sorority with ten other Harvard women. The names of all eleven founders are listed on the Xi Tau website; among them is Sharon Denise Malone. Who she? Well, back then she was a classmate of Ms Lynch. Nowadays she's the wife of … Eric Holder.

What is the nature of this Xi Tau Chapter that Ms Lynch and the future Mrs Holder founded? Judging from the photo gallery on the chapter's website, it's black women only.

Personally I'm fine with that. I'm a freedom of association absolutist. If this sorority chapter Ms Lynch co-founded wants to exclude nonblacks, good luck to them. Of course I also want non-black sororities and fraternities to be able to exclude blacks. I'm guessing that's not Ms Lynch's position. Perhaps the Senate committee could ask her.

In fact, looking at that sorority photo gallery again, Xi Tau may be for mulatto females only. It may be they have one of those brown paper bag tests for admission. You know: If you're darker than a standard brown paper bag, then — sorry, sister. That might go some way to explaining why these elite blacks are all so light-skinned. Barack Obama, Eric Holder — and Mrs Holder, too — Susan Rice, Loretta Lynch … it's like a Mulatto Mafia. Can't we get a few full-blood blacks in there to darken things up a bit? People like Tom Sowell or Clarence Thomas? or Carol Swain? Eh, never mind.

So yes, Ms Lynch is the whole Social Justice package. Here she was early last year at an event in Long Beach, New York, arguing that it is racist to ask voters to identify themselves at polling stations.

[Clip:  "I'm proud to tell you that the Department of Justice has looked at these laws and looked at what's happening in the Deep South, and in my home state of North Carolina has brought lawsuits against those voting rights changes that seek to limit our ability to stand up and exercise our rights as citizens. And those lawsuits will continue."]

I really can't understand how the anti-white crowd get away with this one. What's voter ID got to do with voting rights? Why doesn't the whole country just burst out laughing every time they try this stunt? I have to show ID at the pharmacist when I buy cold medication, but being asked to show it at a polling station is racist? And this is a person being considered for the highest legal executive office in the land? [Laughter.]

In front of the Senate Judiciary Committee on Wednesday this week, Ms Lynch, in an exchange with the magnificent and patriotic Senator Jeff Sessions — whom God preserve! — asserted that illegal aliens have the right to work. Here's the exchange:

[Clip:  Sessions — "Let me ask you this: In the workplace of America today, when we have a high number of unemployed, we've had declining wages for many years, we have the lowest percentage of Americans working, who has more right to a job in this country: a lawful immigrant who's here — a green card holder — or a citizen, or a person who entered the country unlawfully?"

So: another nation-wrecker from the Mulatto Mafia up for Attorney General.

As if that wasn't bad enough in itself, it looks as though the Reverend Al Sharpton had a hand in picking her. This is from the Daily Caller last November 7th, right after the midterm elections and just before Obama announced his choice. Quote:

President Obama is expected to nominate Loretta Lynch to replace Eric Holder as Attorney General of the United States, just two days after Obama's post-election meeting with Al Sharpton and weeks after Lynch's own meeting with Sharpton.

End quote. Lynch herself met with Rev'm Al in August, the reporter tells us.

Remember the bad old days when nominees for the highest offices in the land were put forward by dull, dutiful, blinkered, WASP-type men in gray suits — people like George C. Marshall, Averell Harriman, and James Baker? Well, no more of that cisgendered racist straight male patriarchy! Nowadays these key decisions are made by persons of true largeness of mind and breadth of understanding, wise with learning and incorruptible in demeanor: people like Al Sharpton.

Weep, citizens, weep for your country.

[From the most recent Radio Derb—go to Takimag to subscribe. ]